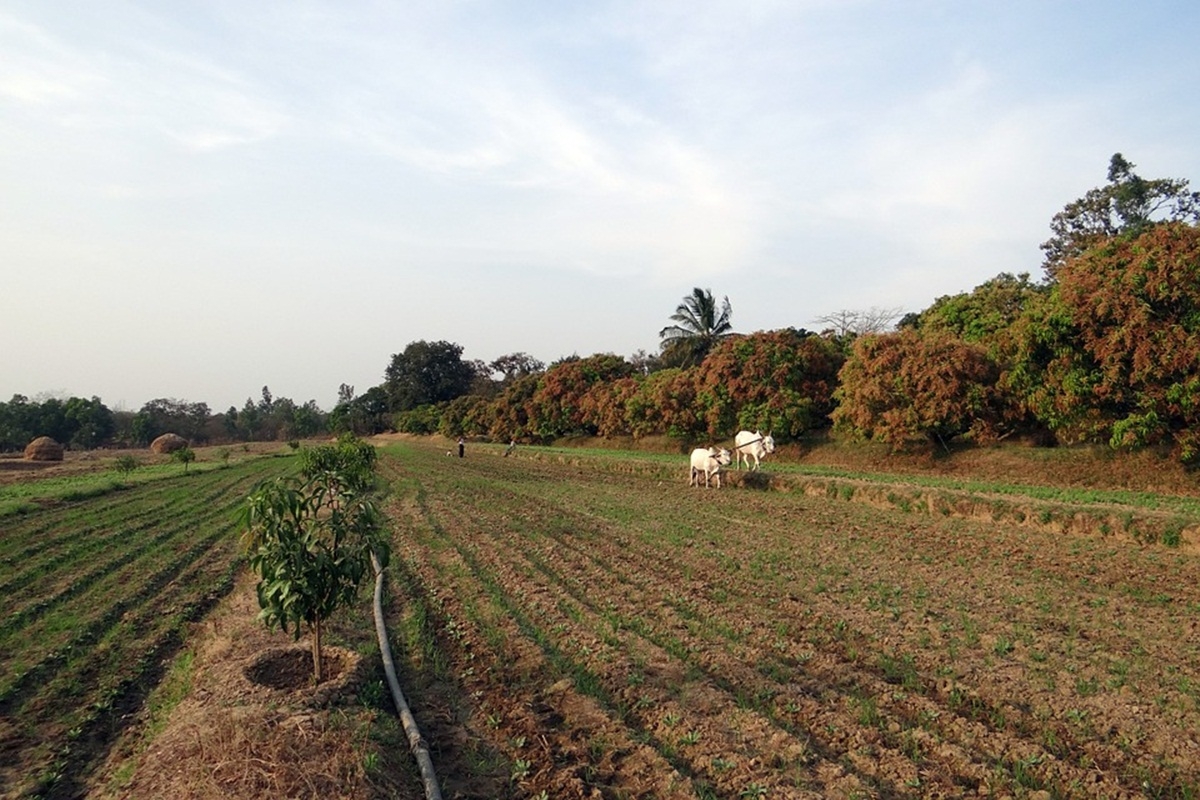 Ever since the government backtracked and repealed the three farm laws, there has been a concerted effort to show that the farmers were and remain misguided. That Minimum Support prices, or MSP, is a terrible idea.

They claim that the government gave in to a small minority ‘graciously’ to maintain peace and to let elections in Uttar Pradesh go off quietly. It was only a minority which fooled the majority of the farmers, say party spokespersons. Ironically, these solicitous statements are being made even after the farmers were earlier called terrorists, anti-nationals, and exploiters.

Even Ashok Gulati, noted agriculture economist, says MSP for all crops is fiscally unfeasible. So does Ravi Shankar Jha, a senior investment specialist, with government-financed InvestIndia, who echoes a similar sentiment. What these spokespersons should do is to hear political economist Parakala Prabhakar who succinctly brings out the sheer unfairness of such a spiel.

Clearly, such critics of MSP ought to study Verghese Kurien carefully. They should study the Indian dairy revolution which catapulted the country into becoming the world’s number one producer of milk. 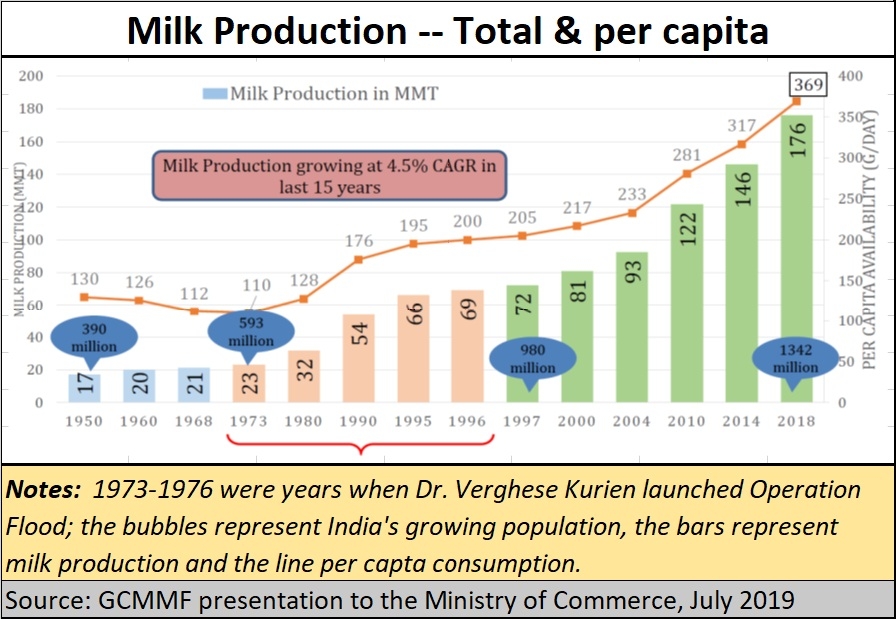 In fact, this author recommends that they should read the latest book on Verghese Kurien (Utterly butterly Milkman) brought out by his daughter, Nirmala Kurien on his 100th birth anniversary. You will find views of other economists who will explain how Kurien introduced an MSP—without any recourse to government support -- that helped farmers, supported consumers with a more nutritious product, and allowed the industry to grow. Today, milk accounts for 24% of agricultural GDP, and has a larger share than both rice and wheat put together.

So why don’t today’s politicians promote a Kurien style management of agriculture, which guarantees farmers a minimum price, and yet does not burden the government in any way? The reason is simple. Politicians do not like the Kurien model because it leaves them with no money to make off farmers. Moreover, since the farmers are happy to invest more and more in dairy farming, they are not beholden to any politician. And there is no scope for guaranteed votes from farmers who know the real value of independence. This was an industry that grew without government largesse. Just watch the chart which traces its growth.

The proof of this model’s success is the way even the private sector has begun to give farmers an excellent deal. Look at Hatsun, the largest private sector player in the milk industry. Examine the manner in which the farmers have prospered with this company. The farmer enjoys an MSP which gives him decent returns – he gets over 70% of the market price of milk. Extension services – artificial insemination and good cattle feed among them – are provided in much the same way Gujarat’s cooperatives or those promoted by NDDB (the Kurien promoted, but today government managed Nation Dairy Development Board).

What will make the industry sick is the government’s penchant for giving out subsidies to politically well-connected farmers. This is precisely what is happening in Karnataka and Maharashtra. In Gujarat, one politically affiliated dairy cooperative is being seduced with export subsidies – albeit through the GCMMF (the apex milk cooperative federation that sells dairy products under the Amul brand). The government chooses to ignore the brutal fact – that subsidies weaken the efficient and reward the inefficient. That is something India’s policy makers do not want to understand and practice.

The milk industry is strong because there is an (often unwritten) MSP. But imports and subsidies could ruin this industry which has reshaped business economics for the entire world. Cooperatives and companies run by politicians – like those in Maharashtra and Karnataka, or even Heritage, a listed company which is run by the family of Chandrababu Naidu – are focused on making farmers vote them to power. The exploitation is worse in Uttar Pradesh. Farmer prosperity is a secondary focus.

Not surprisingly, the government today wants to wreck the Kurien model. It has allowed subsidies for an industry that did not want subsidies at any time in the past fifty odd years. It wants to import dairy products so that the Indian industry can be broken. It almost succeeded when the Piyush Goyal led ministry almost allowed New Zealand to bring its products to India. But the howl of protest from 10 crore farmers (read 10 crore households, or 50 crore people) was loud enough for the government to backtrack. Just the same way it did with the three farm laws.

Make no mistake. The farm laws were not good for the farmers, for several reasons. The main reasons were the refusal

The progressive parts of the three laws concealed a desire to strip state politicians of their power to gain votes and money from farmers, yet retain the central government clout in giving out doles (subsidies too are doles) and favours.

That is why the three farm laws did not abolish the Food Corporation of India (FCI). Why should the government procure rice and wheat hen it is promoting commodity markets? Why can’t FCI procure the grain that it needs from commodity markets instead, and then give it to public distribution or ration shops? That way, the government would not be able to favour only Haryana and Punjab.

Just look at the numbers. The largest beneficiaries are very few states. In the case of wheat only three states are big beneficiaries. That too mostly for powerful farmers in these favoured states, who can influence voting patterns in their respective territories. The small farmers or states that are not favoured, are ignored. These farmers are compelled to sell at distress prices.

That is why farmers are distressed in India. It has led to many farmer suicides in India. The government will just not let them become independent.

Consider how, the government brought in stocking limits for pulses (currently there are stock limits on edible oil and oil seeds) as soon as prices began climbing. Instead of allowing a price stabilisation mechanism to evolve, the way NDDB has done, the government has become the biggest promoter of uncertainty in prices or futures markets. The government did all these even when the three law were not repealed. These laws had removed all curbs on stocking. Once again, it showed the government talks about laws, but does not respect its own rules.

Or consider how, the government has allowed imports of edible oil (this is a story that will be dealt with later) and pulses. The government thus depressed the prices for farmers who were growing such crops. The politicians clearly forgot Kurien’s constant reminder that import of agri products could mean the death knell for farmers, unless there is a farmer organisation (not traders) that takes in the imports and releases them at market prices. That ensures that prices for farm products never get adversely affected.

Study Kurien’s model. You will learn that it is possible to increase agri commodity prices gradually and strategically year after year, yet not let the customer feel the pinch. Customers get upset when prices are increased suddenly, or continually (as in petrol prices).

Farmers also get terribly upset when imports cause prices to fall, which leads them to stop growing that crop for the next year. Kurien ensured that both interests could be reconciled. Look at the wholesale prices of milk and compare them with other consumer and farm commodities. Milk prices have risen faster than all commodities, but less than food articles and food grains. Yet milk producers get better returns because of the way prices are not allowed to fall. That confidence and predictability translates into higher volumes year after year. That in turn has made India the world’s largest producer of milk and dairy products.

Farmers need such assurances. Till such a time that commodity markets can stabilize, and can be understood by farmers, a price assurance mechanism is the best way out. Kurien showed how this could be done without the government, without subsidies without imports.

By working hard on growing the markets, and serving the consumers as well, he encouraged farmers to produce more milk. They knew that milk prices would not fall. That is how the milk industry grew. That is how agriculture can grow, only if the government stops making it a political tool for money and for votes.

Policy makers and economists have yet to learn a lot from his work.