HomeAnalysisPolicy watch: Budget 2022 is high on big plans, short on a reality check

Policy watch: Budget 2022 is high on big plans, short on a reality check

Everybody was aware that the three critical problems confronting India are unemployment, health, and education. One expected Budget-22 to address them.

To some extent, the employment issue may have been addressed (not entirely though). But health and education, the two pillars on which any developed society must stand, are missing from this Budget. There is a cursory mention about health. And new e-learning centres. And, yes, there is a new tax for health and education. But they are laughable provisions. First, employment. There is large scale unemployment – perhaps among highest in the world, as Kaushik Basu (former chief economic advisor to India) and the World Bank point out. Basu was certain that this would get addressed in Budget-22. But Budget-22 ignores this entirely.

In many ways, this problem of unemployment is directly related to education and to agriculture. As CMIE has been pointing out regularly, much to the government’s irritation, that the spectre of unemployment is becoming larger and larger. The peculiar problem of unemployment in India was first highlighted in the government’s reply before the Lok Sabha in March 2018. The data clearly shows that at higher education levels, finding jobs has become more difficult. Those with less education find jobs easily, relatively speaking.

But this is not because jobs don’t exist. They do. But most students in Indian schools are taught so shabbily that after spending 10 years in a bad school, they have lost their ability to do menial jobs on the one hand, and are unfit for better paying jobs on the other. Industry requires talent. But most students are unemployable. The school system in India has almost collapsed, and is destroying talent. 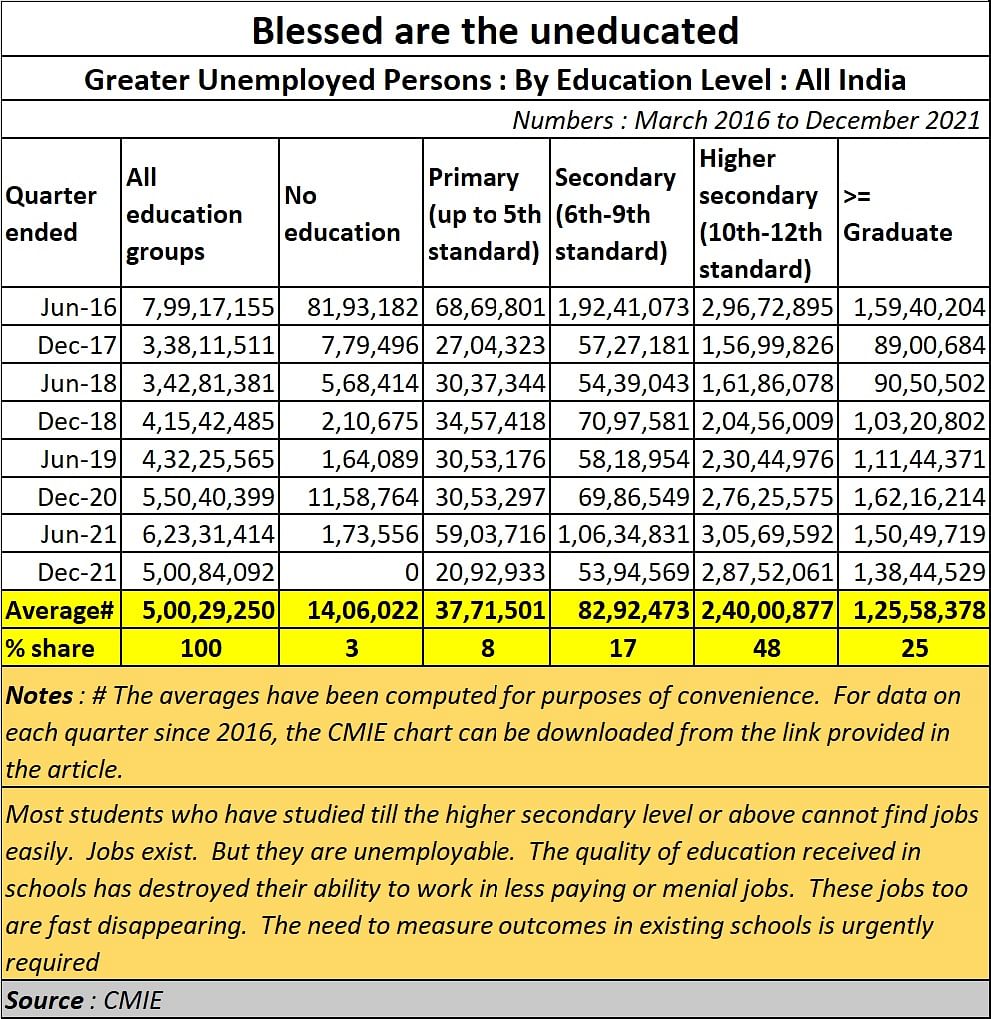 The numbers are brought home more forcefully by CMIE and the full chart can be downloaded from here.

The trouble is that the government has little interest in finding out more about the quality of education imparted at schools. There is no measurement of outcomes. There is no third-party audit to objectively evaluate teaching quality. Outcomes must be measured here as well.

A recent media report showed how grace marks are given by the Gujarat Board. “Of the 2.66 lakh students who got grace marks, around 170 of them got up to 200 extra marks — 231 is the minimum pass marks — and nearly 9,400 students got over 100 grace marks". So routine exam results do not reveal the rot.

That is why the government’s grandiose plan of setting up e-learning centres is quixotic. You need to invest in teachers first. You also need to invest in school buildings (girl students often give up studies at higher levels because of the absence or the poor quality of toilets in schools). UNESCO reported in October 2021 that there were a total of 19% or 11.16 lakh teaching positions in schools lie vacant in the country, 69% of them in rural areas. Later the government admitted that at least a lakh schools existed with just one teacher per school.

In August 2021, the Rajya Sabha was presented with a report on “Plans for Bridging the Learning Gap caused due to School Lockdown as well as Review of online and offline Instructions and Examinations and Plans for re-opening of Schools”. The government has forgotten such plans, and has not made budgetary provisions for improving school education.

It is against this backdrop that most of the provisions for smart cities, e-banking, and a modern infrastructure appear foolish. Where will you get skilled workforce if India’ schools are deficient? Will India begin importing skilled labour?

Instead of strengthening the school system, the government wants to show to the world that it has leapfrogged generations and has started e-schooling centres of excellent. Do India’s administrators not realise that even e-learning requires good teachers familiar with both e-learning techniques and an effective way of offering blended learning? Instead, the budget tries flying kites in the air.

There are other disturbing signs in the Budget. As Yogendra Yadav, Indian activist, psephologist and politician tweeted, many of the budgetary provisions for education, health and people welfare have either been trimmed or kept unchanged. Obviously, mere capital expenditure will not work. As he states, farmers cannot eat drones.

Nor has there been any attempt at increasing the number of medical seats for doctors or nurses. India needs them badly. Moreover, several countries are willing to hire such skills. Has the government forgotten that you cannot have healthcare without doctors? Telemedicine talked about in the budget is thus a joke. 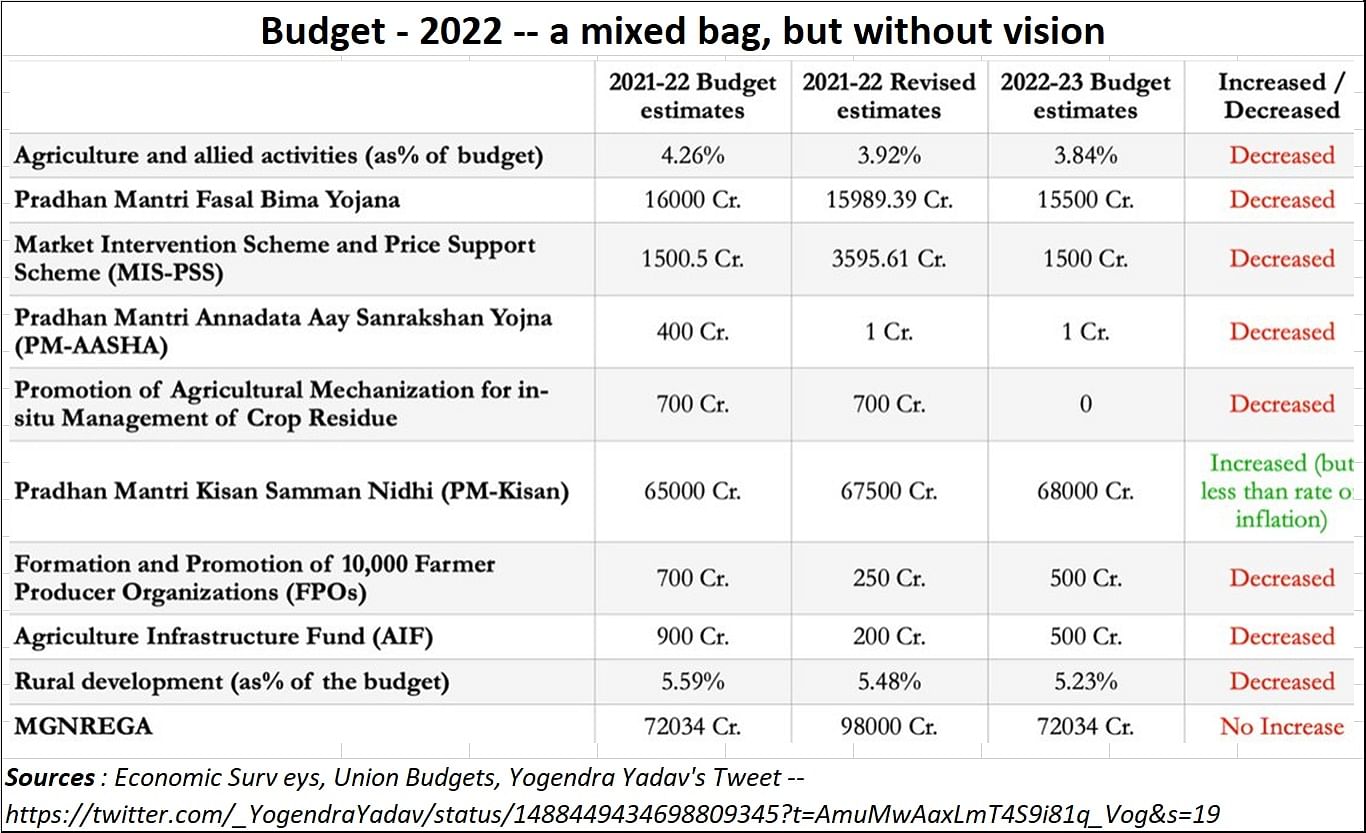 Just look at the numbers. The government spends barely 0.95% of its GDP on healthcare. If we include private investments, the total still comes to just 3.5%. The government’s expenditure should be 7-8%. And the total should be over 10%. Instead, you have fancy ideas about telemedicine and Ayushman Bharat. What will these do without good doctors and nurses being available in sufficient numbers? In fact, you don’t even need money for increasing medical seats. Just let the private sector partner with government hospitals and put in the funds. Together, they can change medicate. That vision appears to be missing.

Without education and health, India cannot progress. This is a simple truth that eludes the people behind Budget-22.

Finally, take the case of agriculture. The government talks big about caring for the farmers. Really? Look at the half-botched way the three farm laws were sought to be pushed through – and finally repealed. Then look at the manner in which the government, just last week, dismissed the autonomy of NDDB. This is the vehicle that Verghese Kurien created, with the blessings of former prime minister Lal Bahadur Shastri. It has been promoting milk cooperatives and stabilising milk prices. In turn, Kurien, through NDDB, helped India become the world’s largest milk producer.

Kurien ensured that the farmer gets 80% (or more) of the market price of milk. He thus changed the global model, which allowed the farmer to get one-third, the processor to get a third, and the procurement/marketing agencies to pocket the remaining third. Kurien ensured that milk prices did not fall, unlike other agri commodities in India. Significantly, he did all this without any subsidy from the government.

Now by abolishing the autonomy that NDDB enjoyed, the government was to introduce subsidies in in a healthy sector like milk as well. Why wreck a model that has stood the test of time for over seven decades?

The NDDB episode makes it abundantly clear that the government does not really have farmer welfare in mind. Cooperatives represent a huge vote-bank and large cash reserves. The government wants control of that. The farmers are mere collateral. It is quite possible that NDDB – through Mother Dairy – will now be compelled to purchase milk from middlemen. NDDB was created to promote milk cooperatives, not to promote middlemen who exploit farmers.

Other examples of contempt for the farmer are evident in the way the government imports edible oil. It has done this with pulses as well. It has whimsically changed stocking limits for agri commodities, banned commodity trading in specific commodities, all of which hurt the farmer, and protect speculators.

Agriculture employs almost 50% of India’s households, hence a big employer. By not addressing agriculture and education, the government also ensures that unemployment is here to stay.

That is why Budget-22 is sightless and derelict. India deserves better.