Policy watch: Agenda for the government – #1. Don't meddle with the dairy sector

This article has two recommendations.

The first is that the health minister needs to be replaced. He promotes neither truth nor good science that Azim Premji, noted industrialist told an RSS gathering recently . Instead, we would like to see someone like the collector of Nandurbar, Maharashtra to be at the helm, because he could not only anticipate the emerging oxygen shortage but also ushered in a solution.

Rajendra Bharud, IAS (@IASRajBharud). district collector of Nandurbar, Maharashtra, anticipated in last September itself, that Covid19 cases would swell. That an oxygen plant would be critically required. Today, the district has 150 vacant beds and two oxygen plants that have a combined capacity to produce 2,400 litres per minute. 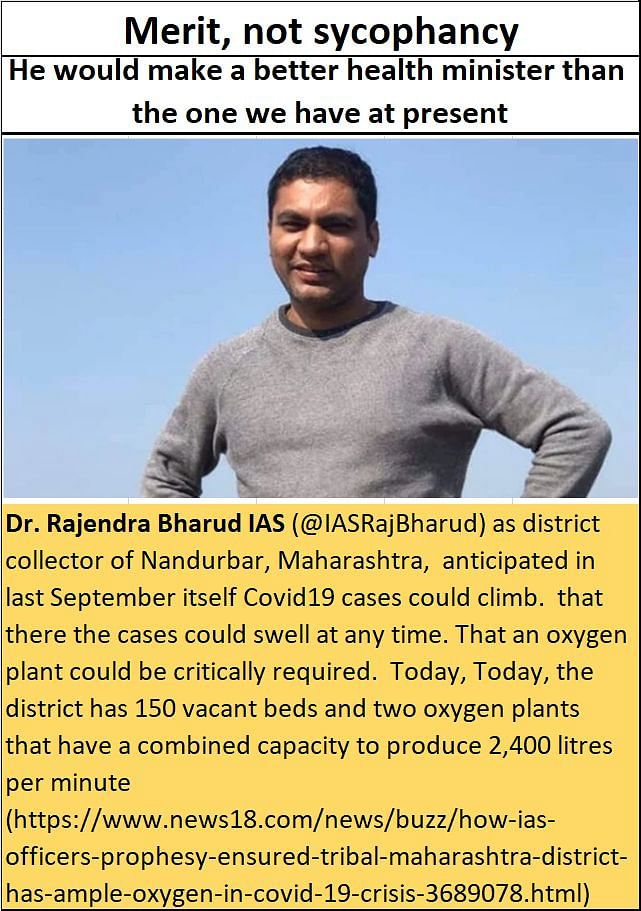 Compare him to the current health minister who:

Failed to anticipate the entry of infected passengers by air in time. Thus, even while almost all eastern neighbours of India, suspended flights to and from China in November 2019, India did nothing till March 2020.

Failed to take steps to mitigate the oncoming oxygen crisis which was known to the government a year ago.

He failed to advise the prime minister that China opted for selective lockdown of cities. No country had opted for a national lockdown, that too with just four hours’ notice.

Despite being a fully qualified medical practitioner, he did not advise the government that what works are medicines, and not the beating of thalis at night.

Did not clear the entry of Pfizer and Sputnik V, among others, for months. It is only last fortnight that the paperwork began.

Went against professional discipline of introducing vaccines only after tests. When there were howls of protest in India and overseas, he twisted his spiel and called the ayurvedic product immunity boosters. Once again, without third party tests, as required. Clearly, not fit to be a registered medical practitioner.

Failed to recommend an increase in the number of seats at medical colleges or at nurse training institutions.

Refused to increase the number of doctors, even after noted surgeon Devi Shetty publicly stated that said there are between 90,000 to one lakh doctors who graduated from overseas universities but have not yet been recognised by the Indian government. A simple way would be to recognise them in exchange for a six-month work tenure at a Covid centre.

One weak justification in his defence could be that when confronted by demagogues, most men turn sycophants. Either way, he must go.

This is the most crucial of recommendations. It is with immense sadness that one notes how Narendra Modi as chief minister of Gujarat was a champion of the milk industry. But after he became prime minister, he abandoned the dairy sector. It could be a half-baked ideology, or it could be the reluctance of the cooperative dairy sector to finance politicians. But the government’s moves were aimed at decimating the diary sector. That could ruin rural prosperity altogether.

If the government is sensible, it will roll back the cattle slaughter ban. Or it should, if it still wants the ban, compensate the farmers @ Rs.20,000 for each old cattle they were not allowed to sell to the trade. That is the money they used to get, which they used to part-finance the purchase of a young milch cattle.

Now with the Rs.20,000 not forthcoming, many farmers have opted not to purchase the replacement. Fortunately, milk production has not declined because of excellent technologies relating to artificial insemination and breed upgradation. But its growth has been stunted.

If the cattle slaughter ban is not lifted, the state should take the old cattle away from the farmer, so that he does not have to pay for its upkeep.

Gau-rakshaks (cow protectors) claim that even old cattle can be profitable. Their urine and dung can be marketed. I tell them, why don’t you keep the cattle, make the money. May you succeed. But free the farmer from this burden. And give him his compensation. However, dogmatism listens to no reason. The gau-rakshaks become vigilantes, and beat up, even kill, any trader found with cattle. Remember Pehlu Khan?

Frenzied gau-rakshaks scream out that the cow is like a mother. Hold it! You don’t buy a mother. But you buy a cow. When you buy, it is investment. Equating it with a mother is facile, stupid, and dangerous. Many of the gau-rakshaks don’t own cattle, hence don’t know the dangers and pains involved in keeping an old and disease prone cattle along with healthier cattle.

In fact, if you study the economic slowdown in India carefully, you will notice that it coincides with the cattle slaughter ban. It was one of the key factors accelerating India’s slowdown.

To understand how the government killed India’s virtuous economy growth cycle, one must understand three things.

Almost 70% of them are marginal farmers, with no land. They have a hut in a village and keep one to five cattle in their backyards. They can, with good feeding practices, earn a profit (incomes less all expenses) of at least Rs.100 per cattle per day for 300 days a year. That is big income. But that depends on whether state government have allowed dairy farmers to get a decent price of Rs.26 per litre or more. The largest milk producing state, Uttar Pradesh (UP), does not pay farmers more than Rs.16-18 a litre. Hence marginal farmers are desperately poor in UP. The poorer you are, and the less educated, the easier it is to ensure that you vote for the strongman in your area. Hence, poverty and illiteracy are part of a political agenda. The social agenda of poverty alleviation and removing illiteracy is a hindrance.

The model Kurien developed and both GCMMF and NDDB promote, ensures that at least 70% of the market price of milk goes back to the farmer. Thus they ensure that the market price does not fall in any year. That encourages farmers to produce more milk. This has been done successfully for over seven decades without any government subsidy. That is how India’s milk industry became the largest in the world. This industry does not pay politicians any money, because it is owned by small farmers. That is one reason why both politicians and bureaucrats hate it and want to demolish it. 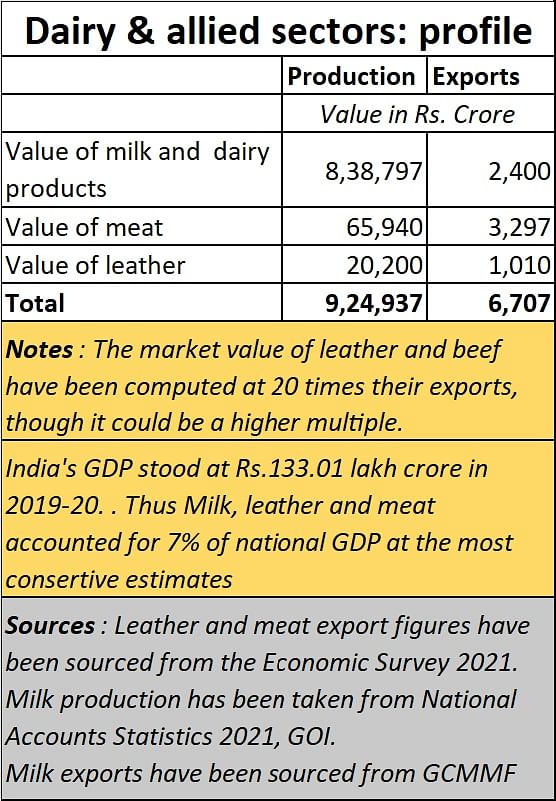 Only 24% of the milk is sold through organised channels – the responsible cooperative sector, as those supervised by GCMMF (Gujarat Cooperative & Milk Marketing Federation, the owners of the Amul brand), private sector companies like Hatsun and Nestle, and cooperatives supervised by NDDB (National Dairy Development Board). GCMMF and NDDB were set up by Dr. Verghese Kurien, the man behind the milk revolution in India. If the remaining 76% of the milk producing sector could also be brought under the organised sector, India’s GDP could go up by at least 6% additionally. Clearly, ministers like Piyush Goyal did not understand this when they agreed to sell away India’s milk industry to New Zealand a couple of years ago. A huge outcry from cattle farmers made the government scuttle such moves. But now the government is trying slow poison by using the subsidy route instead.

Be warned, if the milk sector collapses, India will lose at least 50% of its consumption market. The game of subsidies needs to be stopped immediately. It protects the inefficient and cripples the efficient. And imports will ruin this industry, as domestic market prices for milk cannot be allowed to fall.

Study the table alongside. It tells you of the importance of milk and its related industries – leather and meat. Milk alone accounts for Rs.8.4 lakh crore of output each year, according to the National Accounts Statistics 2021. According to a FICCI report of July 2020, titled Development of Dairy Sector in India July 2020, milk surpasses the

total value of output from the top two food grains by at least three times. Yet the amount of legislative time the government spends on these crops is disproportionately higher.

If the government allows this industry to grow along the lines recommended by Dr. Kurien, this industry could generate an output of around Rs.15 lakh crore. It could become the milk supplier to the world (see chart). 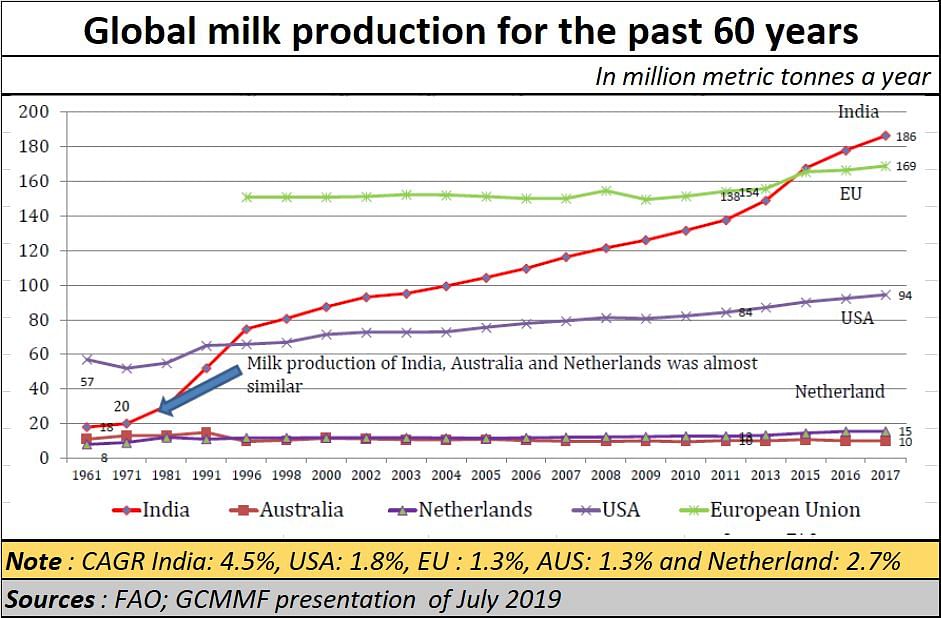 That is why milk producing countries want to cripple this industry, and the Modi government is willing to lend them a hand. They tried the RCEP route. Now they will try the methane greenhouse gases route to cull India’s cattle business.

Milk, thanks to the vision of Dr. Verghese Kurien, is the bedrock of India’s rural stability. It remains the fastest route to rural purchasing power, which in turn triggers economic growth elsewhere.

When the government tried banning even trading in cattle (till the courts stepped in), it was killing the leather trade. This trade is a big foreign exchange earner.

This industry has survived mostly because the milk industry ensures a steady supply of hides which it can then cure, value-add, and then export. India can become the world’s largest exporter of this item as well, and thus create more jobs and more wealth for the country. Once again, western countries, in a bid to make India stumble, had tried to trip the dairy industry by exporting clarified butter into India, but were stopped by Dr. Kurien in the late 1980s.

They then spread a canard that India’s leather was carcinogenic. The irony was that these very countries used to buy the uppers from India, fit them overseas and call them leather goods made overseas. The leather industry has withstood all this. It could easily grow to double its size.

The Modi government was about to kill this industry as well.

Most non-vegetarian Indians consume chicken, goat meat, and beef (some consume pork and camel meat as well). However, a large percentage of beef is also exported. When it comes to buffalo meat – known as carabeef, India is the world’s largest exporter.

This is because the cost of meat production is among the lowest in the world. India does not have to grow cattle to meet meat demand. It is a by-product. Hence, unlike other countries, where cattle must be reared for meat production, India has them round the year. A second reason is that most Indian cattle are fed nutritious vegetarian cattle feed. In other countries, to accelerate cattle growth, they are fed a variety of things, which makes the meat less safe for human health. And the reason why India is the largest exporter of carabeef, is because few other countries rear buffaloes.

India has always been the largest or second largest meat exporter and its market share has been improving. But the cattle slaughter ban has hurt its growth. Like leather, it is labour intensive, though reliable employment numbers for this sector are not available.

But if the cattle slaughter ban is not eased, and if the vigilantes are not curbed, India risks losing this industry as well.

Hail to the triumvirate

Together, these three industries account for almost half the rural employment and much of nutrition. Milk alone accounts for per capita consumption of swelling to 320 ml/ day. The diary sector is the mother lode for all the three industries. Hurt it, and you could lose almost a third of consumer demand in India. For some categories like semen production, vaccines, the loss of business could be greater.

If India has to see economic revival, it must start with improving purchasing power in rural areas, because that is where 50% of the population resides. That triggers a growth in other sectors as well. Hurt this sector, and you slow down the country’s growth, both as an exporter and as a generator of wealth and nutrition.

There are other strategies that the government should pursue. But those will be taken up in subsequent articles.

HomeAnalysisPolicy watch: Agenda for the government – #1. Don't meddle with the dairy sector