Many people do not know that the man who made the shooting down of messengers repugnant in law and practice is the legendary Genghis Khan (1158-1227). When the Persian king brutally dismembered Genghis Khan’s envoy, the latter then attacked the ancient empire with all his force and razed it to the ground.

Legend has it that he proclaimed that the wrath of the gods and of empires would befall any ruler who chose to attack messengers. That later passed down the ages as diplomatic immunity and protection for envoys. Genghis Khan was a visionary. After his first fierce climb to becoming a leader of an army, and after he defeated king after king till he entered India, most of his other conquests were peaceful. His reputation was so fearsome, that many kings acceded to his sovereignty, and paid him annual negotiated tributes. And once in Mongolia, he ruled by consensus rather than by fiat.

He also set up the first courier service from Vladivostok to Vienna, allowing messages and parcels to reach from one end to the other in just 14 days. In fact, world history would have been different, if only he had lived a month more. His troops had encircled Vienna which was about to surrender. But then came news that the king had died. All the soldiers left Vienna’s borders for Mongolia. Vienna survived. Western history remains the way it is today.

That makes many people ask the inevitable question: “If he was such a visionary, why do many people still regard him as the most evil ruler?”

The answer to this question was given quite charmingly by Ravi Boothalingam, founder-chairman, Manas Advisory and former managing director Vazir Sultan Tobacco Company (later taken over by ITC Ltd). He has studied Mandarin and was commissioned by National Geographic to try locate the tomb where the earthly remains of this conqueror may lie. Boothalingam’s explanation is simply this, “Genghis Khan’s history was written by people whom he defeated.”

When Khan died, he ordered that no tomb ever be built over his grave. To ensure that his orders were obeyed, three funeral corteges left his palace. It is possible that none of the three hearses bore the king’s body. Even today, the exact location of his body remains a guess.

Genghis Khan is relevant for India to underscore three things. One, that you do not need to build a tomb, a stadium or send a photograph into space to prove that you are great. Second, messengers should not be harmed in any way. Third, consensus is extremely important.

One is the government appointed envoy.

Another is the journalist who must report of things as they are, not as they are proclaimed to be.

Then you have common citizens who try to tell others what their plight is.

You must also include analysts and visionaries, who could tell governments what ought to be done.

You must also add another situation – where conditions are created so that it is impossible for anyone to become a messenger.

All of them are messengers. And harming them – or preventing them -- is inimical to economic growth and public health. Especially in a democracy.

According to Reporters without Frontiers, “With four journalists killed in connection with their work in 2020, India is one of the world’s most dangerous countries for journalists trying to do their job properly.” It ranks India #142 in the 2021 World Press Freedom Index.

Moreover, the number of those killed do not tell the entire story. There is the story of the journalist who was picked up by the Uttar Pradesh (UP) police for covering the Hathras rape case. He languishes in prison even today, though none of the charges of being anti-national have been confirmed by the courts. On the contrary, the Supreme Court has taken a rather dim view of the actions of the UP police. The number of journalists arrested, harassed, and intimated by the state is huge.

As the Reporters Without Frontiers website puts it, “They are exposed to every kind of attack, including police violence against reporters, ambushes by political activists, and reprisals instigated by criminal groups or corrupt local officials. . . . . Indians who espouse Hindutva, the ideology that gave rise to radical right-wing Hindu nationalism, are trying to purge all manifestations of “anti-national” thought from the public debate. . . . . Criminal prosecutions are meanwhile often used to gag journalists critical of the authorities, with some prosecutors invoking Section 124a of the penal code, under which “sedition” is punishable by life imprisonment. “

The second way is to arrest citizens who put on social media anything that the state does not like. The incidents are far too many. This was taken to absurd limits when just last month, the UP government arrested a man for making an appeal through social media for oxygen, as his father was dying (the father eventually died, and the Supreme Court had to step in with an edict that any arrest on account of postings on social media would be treated as contempt of court). But there are times the ruling party tries to publicise information than many believe to be fake. Twitter recently classified them as “manipulated”. Not surprisingly, the police landed up in Twitter’s office in Delhi. The ruling party has yet to come up with the document which they claim the opposition was trying to promote. The two documents presented by the ruling party were found to be forged.

The state views information from posts on social media and reports from independent journalists as acts which seek to present a wrong picture of the prevailing situation. In fact, the real picture is several times worse, with queues of bodies lining the streets to the crematoriums, unclaimed bodies floating in the river, and bodies buried in the sands. This independent report mentions 2,219 deaths in UP just from just 6 May to 12 May. The state conceals the number of infected and deaths by asking diagnostic companies not to conduct tests, and threatening reporters with dire consequences if they dare report this.

By suppressing data and threatening dire consequences for anyone who tries reporting on actual data, the state is effectively shooting down potential messengers. In the end, this suppression of information leads to poor decision-making. 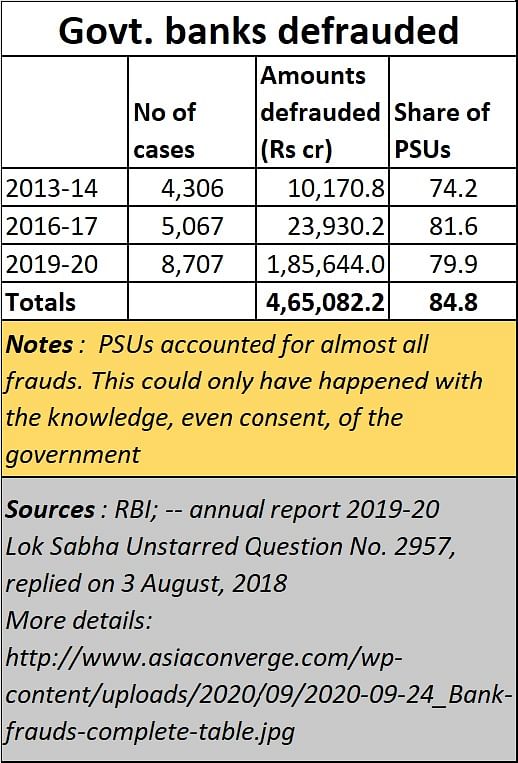 It is worth remembering that one of the most powerful tools for decision- making is crowdsourcing. With little information, a coterie advises government on what is to be done. Eventually decision-makers won’t even know when they are being wrongly advised.

The third way is suppressing data. This is done in several ways. First, make access to data extremely difficult. Look at the chart alongside.

It is about bank frauds. And it is based on data from the RBI (Reserve Bank of India) and the answers given to the Lok Sabha on 13 August 2018.

Try googling for the Lok Sabha report. You just won’t find it. Yes, you do come to a website from where you can get Lok Sabha and Rajya Sabha information, Try typing out the date, or the query number, and chances are that you won’t find the document. If you do find it, chances are that the annexures will be missing.

It is worth noting that this is information that the Lok Sabha and the Rajya Sabha has been given, which legally and constitutionally should be shared with the public. The government has actually created rules for access that are so complicated that getting the information isn’t easy. By denying easy access to such information, the government is doing something illegal and even unconstitutional.

The information in the table is crucially important, because it shows that despite the morality plays staged by the government, bank frauds have continued to soar both int terms of the number of cases, and in terms of the values involved. They also tell you that most of the frauds were at government owned banks. Yet, to date, none of the officers in charge of these banks have been prosecuted and convicted. None of the people in the ministry or at the regulator’s office, who were to have stanched these leakages, performed their duty, hence deserve to be both dismissed and prosecuted. That they were not, pushes the buck to the very top.

If this information were easily available, public pressure would have helped remedy the situation to some extent. At present it appears that the government is itself party to such frauds.

This fear is buttressed by yet another statement made by the government in the Rajya Sabha (the documents cannot be easily traced today). It shows that the largest fraudsters were industrialists – often close to the people at the top in government circles (see chart). 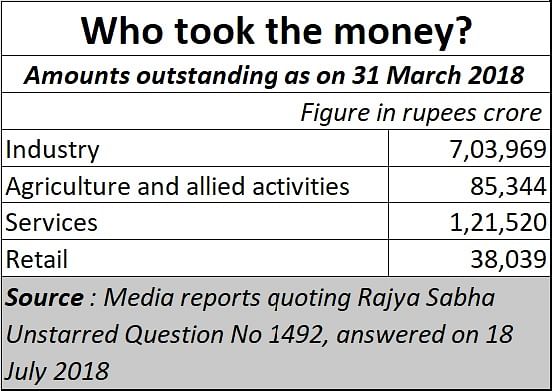 Linked to this type of non-availability of documents is the other ruse that government officials play. They create rules which make information availability extremely difficult. For instance, tenacious pursuit of bank fraud cases by an RTI (Right to Information) activist to gain access to RBI’s inspection reports on the Punjab and Maharashtra Cooperative Bank (PMC Bank). They point to fudging of data and diversion of funds by the bank as early as in 2014-15. By not divulging the reports, the RBI and the finance ministry actually allowed the frauds to grow. The people who lost out most were common depositors.

Moneylife, a publication, found that the RBI reports of 2012, 2013, 2014 and 2015 – which the central bank was compelled to disclose in 2019 – are damning. They have enough evidence implicating the State Bank of India (SBI) for indulging in evergreening, window-dressing, cover-ups and worse. Had this information become public earlier, additional sums might not have been lost in subsequent years.

That is why most economy watchers cheered when Dr. Subramaniam Swamy, member of Parliament and economist, finally decided to file a public interest litigation (PIL) appeal in the Supreme Court “seeking a probe by central bureau of investigation (CBI) into the ‘illegal acts of RBI officials’, leading to various scams.

The petition lists 10 big scams and states, “not a single RBI official has been brought to justice despite RBI retaining the power to monitor, regulate, supervise, audit and direct the functioning of all banking companies in India.” Dr Swamy’s petition is brief and is focused on making RBI officials subject to CBI investigation. RBI’s failures, argues the petition, has inflicted huge losses on depositors, investors, and shareholders, causing a ‘loss of faith in India's banking system’.

To be fair, the RBI under Urjit Patel as governor of the central bank, did try to pass rules preventing RBI officers being government nominees on bank boards. He saw this as a conflict-of-interest situation, but the government did not agree with this. His wishes were cast aside and the government view prevailed. This is yet one more indicator that the government creates rules that abet fraud. It had already made it clear that the RBI board, controlled by the government is the boss, not the RBI governor.

There are other black holes where information is required, clarifications needed, and a desperate need for many more messengers. But that will come in next week.

Clearly, the present state of silence and intolerance is just not good for national economic health.