Param Bir Singh saga: Most IPS officers will never speak out because they will be hounded, writes Olav Albuquerque 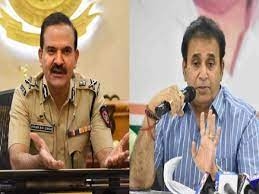 The arrest of the former Maharashtra home minister, Anil Deshmukh, on Tuesday after he had skipped attending the Enforcement Directorate multiple times in response to summonses, shows what the former Mumbai police chief, Param Bir Singh, had alleged in his complaint to Chief Minister Uddhav Thackeray has substance.

After all, police commissioners are selected by the Director General of Police (DGP) in consultation with the chief secretary of the state and the chief minister, who is the final authority in the transfers of police officers. Unless clearly proved to be mala fide, the Bombay high court will not interfere in police postings when the file is cleared by the chief minister.

But more often than not, political expediency outweighs merit because although a person devoid of merit will not be chosen for the top job, the IPS implies ‘I Prostrate (before you) Sir’. Their annual confidential reports are seen by the chief secretary, who as an IAS officer, knows the dictum of ‘I Agree Sir’ and is the obverse of what the IPS officers obey.

The Prevention of Corruption Act, 1988, has proved to be a toothless tiger, with those being booked under the Act either discharged before a trial starts or are acquitted after the trial. In Maharashtra alone, which had 891 corruption cases registered in 2019, there were a whopping 294 acquittals out of the 891 cases which went to trial in 2019. Only 55 convictions were obtained, implying that the Anti-Corruption Bureau (ACB) which comes under home ministers like Anil Deshmukh is vulnerable and impotent, which is why the Prevention of Money Laundering Act, 2002, has been used against Anil Deshmukh. After all, the Enforcement Directorate, which enforces this law comes under the Central government.

A senior IPS officer like Subodh Jaiswal was not comfortable with Uddhav Thackeray and Anil Deshmukh finalising the postings and transfers of IPS officers. The DGP felt there should be a fixed tenure for police officers before being transferred. But Thackeray and Deshmukh wanted the last word. Now, with Deshmukh being arrested by the Enforcement Directorate in the Rs 100 crore extortion scam, perhaps the reasons become obvious.

Jaiswal, who was with the external intelligence agency R&AW for a very long tenure, returned to the Maharashtra cadre of the IPS on July 1, 2018, and was promoted as the DGP on March 1, 2019. He now heads the CBI and knows better-than-most about the shenanigans of Anil Deshmukh and his cronies. But Jaiswal will never talk, citing service rules. After all, what happened to Param Bir Singh can also happen to Jaiswal. So, silence is the better part of valour.

If the IPS cadre are subjugated by politicians, those coming from the state police service and aspiring to be inducted into the IPS by the IPS (Appointment by Promotions) Regulations, 1955, are much more vulnerable, which becomes evident from Param Bir Singh’s allegation that renegade Assistant Police Inspector Sachin Vaze was called by Deshmukh’s secretary and told to extort Rs 100 crore per month from restaurants and bars in Mumbai.

Vaze then met Param Bir Singh and told him this. This was what made Singh cogitate over what step he should take because Anil Deshmukh was his boss and would have shunted him out a lot earlier if he did not toe the line. And the courts do not always come to the rescue of beleaguered police officers, which is why Param Bir Singh has purportedly declared he has no more evidence to give against his former boss, Anil Deshmukh.

What has happened to Param Bir Singh is precisely what is happening to most IPS officers in the country. They will never speak out because they will be hounded the way Param Bir Singh has been hounded, though he himself is not a paragon of virtue because when one joins the IPS force, none of those who are ambitious can ever be paragons of virtue.

Now, if we compare the case of former Governor of Goa Satya Pal Malik, with Param Bir Singh, certain corollaries emerge from both cases. In the former case, the former governor of Jammu and Kashmir and later of Goa, Malik, had alleged the Goa chief minister, Pramod Sawant, was corrupt and a company that had allegedly ‘paid off’ those in power was allowed to operate during the pandemic in the tiny state. Param Bir Singh may be dishonest but we cannot doubt the honesty of Governor Satyapal Malik who was appointed by the same political party as Pramod Sawant.

Article 200 of the Constitution lays down the powers of any governor who is a de jure head of any state in India. Malik has been shunted as governor of four states within about the same period. As governor of Bihar, he shot off two letters after news reports of girls being sexually abused in a remand home in Muzaffarpur. From Bihar, he was shunted to Jammu and Kashmir and then to Goa, after he flayed Pramod Sawant for corruption. After being shifted to Meghalaya, he has backed the minimum support price for farmers, saying it should be enacted into law.

A third example is that of the Narcotics Control Bureau Zonal Director Sameer Wankhede who was attacked by Nationalist Congress Party minister Nawab Malik on the allegation that he tried to extort Rs 8 crore from Shah Rukh Khan. These allegations have been proved false but the allegations have got murkier, with religion being dragged in.

The corollary which emerges from these examples is the people do not have a right to know how their elected representatives discharge their duties. Speak up and be shunted out is the dictum so that the law becomes a pawn in the hands of those whom we elect to select the outspoken as examples for punishment.