Governments, around the world, like to hype up numbers. At such times, it is necessary to look at numbers from more than one angle – one gets a better perspective then.

When elections are round the corner, the tendency to wax eloquent about achievements is at its peak. Governments, around the world, like to hype up numbers.  At such times, it is necessary to look at numbers from more than one angle – one gets a better perspective then. 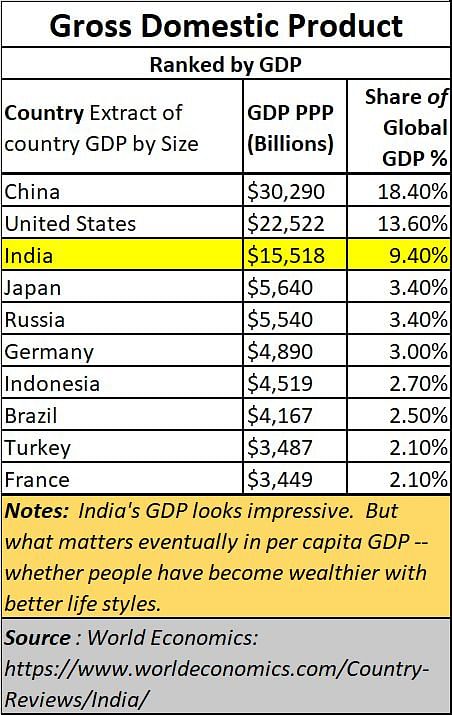 One way of looking at numbers is the way the government wants you to view them. Consider, for instance, the way the Reserve Bank of India (RBI) presents data.  It talks about India’s external debt. But that is only part of the story.  One needs to look at total debt as a percentage of GDP>.

That is where a statement by Paolo Mauro, Deputy Director, Fiscal Affairs Department, International Monetary Fund, on 12 October, 2022 comes in useful: “In terms of the debt ratio, India right now at the end of 2022, we're projecting it at about 84 per cent of GDP. That is higher than in many emerging economies".

That raises another question.  Since debt can be used for pushing up GDP, should one discount India’s actual GDP by 84%?  To be fair, borrowed funds aren’t a problem, if they are deployed meaningfully, contributing to education, health and employability of its vast human resource.  But when funds – especially through debt – are used for freebies, without asking recipients to be accountable for the money received, then the growth in GDP becomes suspect.

The tendency to splurge money on freebies is most evident before elections.  Once instance is the free food for over 80 crore people for one year. You can be sure that this generosity will continue till elections are over, or even longer, because it is difficult to withdraw a freebie once it is announced.

Then consider the government’s recent decision to increase its borrowings by additional Rs 4.36 lakh crore, of which Rs 1.11 lakh crore will be met through higher revenues and overall net cash outgo is projected to be at Rs 3.26 lakh crore. This spending will be over and above the budgeted amount of Rs 39.45 lakh crore for FY23.  Also look at the high rate of unemployment – the highest among its neighbours. 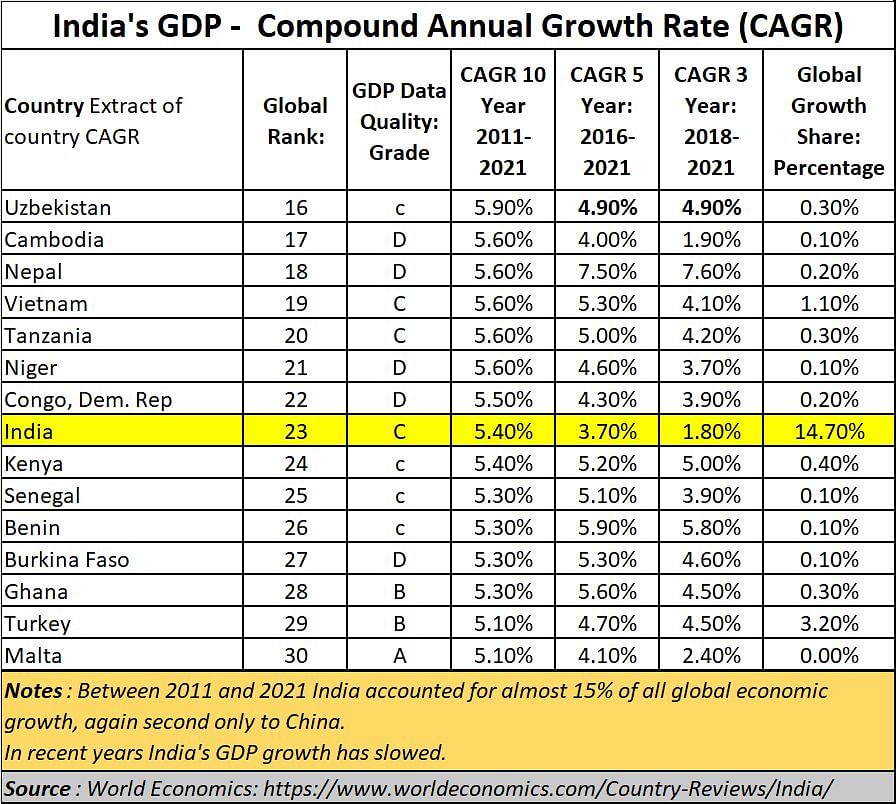 At such times, all other indicators -- the soaring trade deficit, poor capital formation or GFCF, and the inflow of foreign direct investment or FDI – become major causes for concern.  It then becomes evident that the country is not in as much of a shipshape condition as is often claimed.

Focus on per capita GDP

Take another claim – India’s GDP is one of the largest in the world.  But, then, what really matters for any country is per capita GDP. That tells you if the common man has the potential of enjoying a better standard of living.  This is where India lags behind many emerging markets (EMs).

Once again, there are many ways of looking at this number as well.  Prima facie, India’s per capita growth rates have been excellent.  If one looks at 25-year growth rates, India excels.  Its growth surpasses growth rates for the average emerging markets and the Asia-Pacific region.  But that is when one needs to look at actual per capita GDP incomes.  India’s figures are among the lowest among EMs. When the base number is small it is not difficult to notch up extremely impressive growth rates.  But these growth rates need to be significantly higher if India has to catch up with other EMs. And this is where the broad conclusions of Global Economics  become extremely relevant.  It points out that India's GDP is significantly understated in most investment commentaries.  It believes that India could have a better story to tell if only it could focus on better quality data and price measurement.

It says that India accounted for 15% of global growth over the last decade, and is now probably the third biggest country in GDP terms. It also says that it is possible that India's GDP will overtake the United States within a decade to become the world’s number #2 economy.

But the government has a penchant for concealing data. It is also unwilling to permit better price discovery.  Together, both shortcomings  together make the India picture look for worse than it should be. In other words, the government itself has shortsold India. This is where India must learn to be a lot more transparent with its information. It needs to restore the statistical supplement that used to come with every annual Economic Survey.  It needs to make access to Lok Sabha and Rajya Sabha answers a lot easier, as well as  searchable and retrievable through any search engine.  After all, these are answers given before the Parliament, which every citizen has a legal right to.  By making such access difficult, the government is only harming itself.  It is slowing down the growth potential of the entire country.

Ditto with the information the country gets through its decadal Census findings.  It is three years since Census 2021 was to be released to the people of India.  For one excuse or the other, this has been deferred.

The country needs this information for better planning, better policy formulation, and even better governance.  In fact, there are good reasons for the courts to compel the government to release this information before the next general elections are called.

This is because the Aadhaar figures need to be cross-checked.  Inflated Aadhaar cards will mean additional outflow of money in subsidies that are earmarked to ghost entities, thus adding to the country’s fiscal deficit.  It also has a direct bearing on elections.

Do recall the words of Sanjay Dhotre, minister of state for Electronics and IT, who informed the Rajya Sabha in February 2020 (in reply to the Unstarred question No.*527 which enquired about Aadhaar cards.  He informed the house that  “Seven states have Aadhaar more than the projected population as on December 31, 2019,”  The URL given above does not work anymore.  But corroborative confirmation can be got from several published sources – some of which have been listed at https://asiaconverge.com/2022/12/indian_economy-out-damned-spot/.

It is in this context that the Election Commission’s attempts to allow voting from anywhere is fraught with grave risks to India’s democracy, as these bogus Aadhaar cards and election cards could then be used from anywhere tipping the margin of votes cast in favour of one party or another. It is in the light of these fears that even the “remote voting” solution that it has proposed just last week needs to be scrutinised very carefully.

To conclude, India has tremendous potential.  But the government blurs people’s perceptions by giving out partial information, which only adds o suspicious.  Its data quality needs urgent upgradation, as well as its transparency.  With better data will emerge many solutions to the pathetic conditions of its judicial redressal systems, its education and its healthcare.  It will allow entrepreneurs to have more confidence in this country and not vote with their feet by migrating to other countries.

Editorial: Important address by the President

Egypt and India: A mix of hyperbole and achievements

Mumbai – city of despair and repairs