Advertisement
Home / Analysis / Oil prices could be on fire. Will India get scalded?

Oil prices could be on fire. Will India get scalded?

Oil prices have been rising for the past one year. But the recent spike sent shivers down the spines of most economy watchers, especially in India.

Oil prices have been rising for the past one year. But the recent spike sent shivers down the spines of most economy watchers, especially in India. More than 25% of India’s imports are oil related. The dollar is becoming stronger (or rather the rupee is becoming weaker, even when the dollar falls). Inflation is on the march. All the three spell trouble for the Indian economy. The immediate cause for the spurt in oil prices was the drone attack on fuel tankers at an Abu Dhabi National Oil Co. (Adnoc) facility in the UAE. Almost immediately, Brent crude futures rose $1.37, or 1.6%, to $87.85 a barrel, while US West Texas Intermediate (WTI) crude futures climbed $1.71, Many marketmen believe that oil prices could even touch $120. As one trader put it, “Anything is possible.”

The IEA in its December 2021 report stated that prices had already begun climbing over the past 12 months because of several reasons. Clearly, the clamp on transportation and holidaying on account of Covid restrictions had not dampened demand. As and when Covid restrictions ease, expect demand to soar even higher.

IEA believes that global oil production is poised to outpace demand from December, led by growth in the US and OPEC+ countries. That should have dampened prices, but it hasn’t happened. Other factors appear to be at work.

True, refinery throughput surged by a hefty 1.9 mb/d (million barrels daily) in November and is forecast to rise by another 660 kb/d [in December], when it is set to breach the 80 mb/d threshold for the first time since the start of 2020. But demand has also kept pace. So, there is no real surplus.

Instead, as IEA notes, OECD total industry stocks fell by 21.2 mb in October, as a build in crude oil inventories was more than offset by sharply lower product stocks. At 2 737 mb, total stocks were 243 mb below the 2016-2020 average. Preliminary data for November show industry stocks decreased by a further 23 mb, and crude oil held in short-term floating storage rose by 8.4 mb to 134.5 mb. Obviously, where shortages exist, there is immense scope for speculators to play.

But there were other factors at work as well. As Ruchir Sharma points out in his talk with Pranoy Roy of NDTV, prices of commodities were predicted to rise in 2021. He states that such trends are bound to manifest themselves over the next few months. “There is so much pressure to cut new investment in oil, in mining, a lot has to do with political pressure, the pressure for climate change, green politics, which is all fine, we all want a better environment and climate out there, but the problem is we are cutting supply of commodities and yet the demand for commodities whether it is driving or it's got to do with building solar panels and new green infrastructures . . . is going up [causing] supply constraint. It's basic economics that you constrain the supply for all sorts of reasons, but you still keep demanding, prices are naturally bound to go up and that is what's happening. . . . , So, we are not investing in minerals, but we are demanding it and using it. So, it's just going contradictory to what 'green' should be.” he explains.

Even Barrons notes that commodity prices are up and away.

Goldman Sachs too concurs. In its analysis in September 2021, before the drone attack took place, it pointed out how “Brent oil prices have reached new highs since October 2018, and we forecast that this rally will continue, with our year-end Brent forecast of $90/bbl vs. $80/bbl previously.” He says that this price increase could push up India’s current account deficit by around $15 billion, though higher oil prices will mean higher revenue for the states under unchanged excise duty conditions. Expect subsidies on LPG and kerosene to go up as well. India depends on imports. Hence higher prices globally will mean higher import bills. 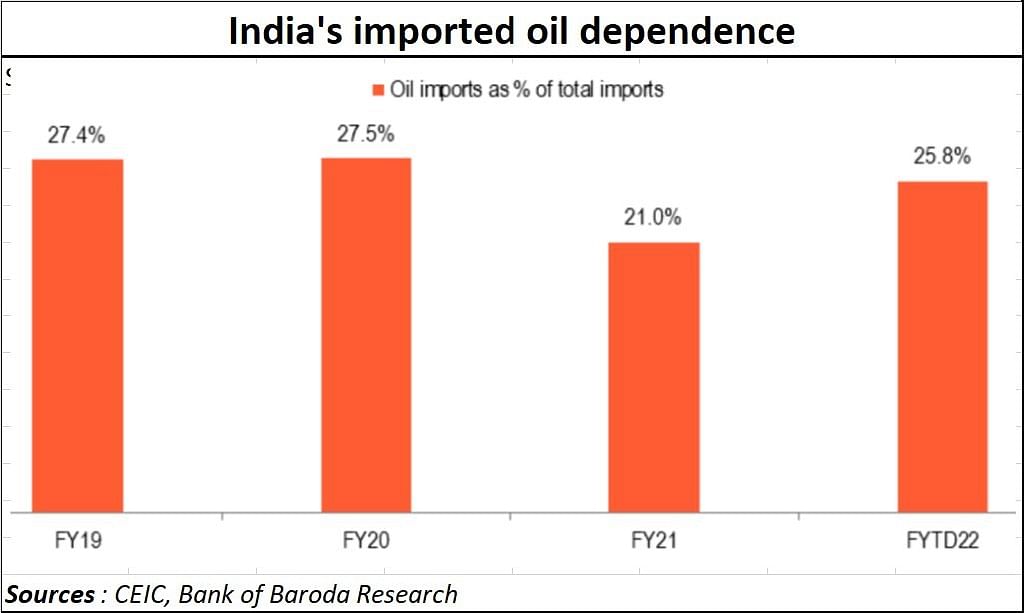 The scaling up of hostilities on account of the Yemen civil strife could push up oil prices even further. Any tensions around Ukraine, could cause it to spike further. Punters have already been saying that oil prices could touch $120.

What nobody says openly is that the principal cause behind these problems is the US. It has cut supplies to the world by sanctioning Iran and Russia (and restricting supplies from Syria), without the backing of any UN resolution. It has ratcheted up the stakes by funding one section of the Yemeni contenders, and has allowed Saudi Arabia to support them as well. That in turn has made the other faction wage war on the Gulf region. If any of these skirmishes goes out of hand, the entire Gulf region could be on fire, and oil prices could go wild.

Not that US oil companies are complaining. They already have a large production base in the US, and have equity stakes in almost al the Middle East oil and gas facilities. For the US it is heads-I-win-tails-you-lose.

The collateral costs will have to be paid for by the rest of the world.