Prime Minister Narendra Modi does it yet again for India 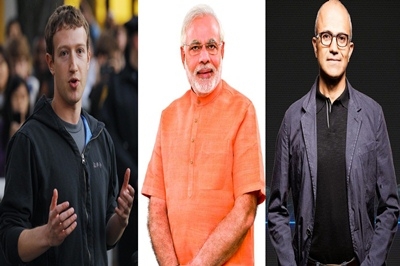 Prime Minister Narendra Modi getting visibly emotional when asked by Facebook CEO Mark Zuckerberg at the company’s headquarters in California on Sunday about his mother must be one of the most memorable moments of his foray into Silicon Valley. While Modi and a lot of people in the audience found it hard to hide their emotions, back home, we suspect, Congressmen couldn’t help but cry at the astounding success of yet another foreign visit by their bête noire. Modi had again renewed his connect with the Indian people while playing a consummate ambassador for the country abroad. All that cribbing and small-mindedness on display was shown up in rank bad taste when independent observers without exception hailed the Modi mission to the home of high-tech on America’s West Coast.

From New York, where he established a rare personal rapport with the Fortune 500 biggies, impressing upon them the need to pick up the pace of investment in the world’s fastest growing economy, to San Jose, California, Modi blazed a new trail. It helped that some of the totemic IT companies like Google, Microsoft, and a host of others have Indians at their head or near-about. Given the ambition of the Digital India project, the interest in its success was mutual. A Google or an Apple, or, for that matter, Microsoft, wouldn’t like to miss the action as India goes high-tech, taking Internet to the remotest hamlet in a bid to make governance easier and to improve Indians’ lives.

There was no disputing that Modi was the most tech-savvy PM ever and fully appreciated the transformational role of Internet. Whether it was the delivery of targeted welfare schemes or the synchronisation of the traffic lights or the railway reservations and ticketing, IT was set to play a major role in improving things all around. As Modi told a meeting in the Facebook campus, the opening of some 100-million-plus Aadhar-linked bank accounts could be possible only because the digitisation of the nation-wide banking network. Yet, there was a digital divide in the country, with the rural folks still unable to benefit from the Internet revolution. But the mass popularity of the mobile phones was one way to connect all Indians. Given that there were nearly a hundred crore cell phone connections in use, the Digital India project should not be hard to implement. Linking some six lakh villages with optic fibre for broadband services is proving painfully slow and needs to be accorded priority. The sheer size and number of potential users makes India attractive for the Silicon Valley giants. In California, Modi also made use of the opportunity to visit the campus of the renowned Tesla Motors which has done pioneering work in inventing batteries for storage of electricity at low cost for long periods. Modi’s commitment to vastly step up solar power generation is inextricably linked to the availability of such batteries. Tesla, which has blazed a new trail with its battery-operated vehicles and other related innovations, can gainfully expand its business in India.

Of course, it goes without saying that without setting things right at home, foreign companies might find it hard to operate in an unfriendly environment. Modi was fully conscious of working towards a better ranking on the World Bank’s ease-of- doing-business index. Being a federal system, State Governments too had to be on board to improve the business environment. The fact that there was a forty percent increase in the FDI in one year, also underlined the attractiveness of India as a destination for investment dollars. With China no longer a safe bet, India has its chance to gain economic momentum provided it gets its act together. Yes, the pace of reforms is slow but incremental gains cannot be discounted despite the hostility of the Opposition Congress. It is a pity that the Congress spokespersons find it hard to digest the stupendous success of Modi’s foreign visits. And if the Indian PM is seen to be going abroad rather too frequently, it should be considered that his foreign counterparts, be it President Putin of Russia or Prime Minister Cameron of Britain, too have travelled abroad as many, if not more, times than the Indian PM in recent months. In an increasingly globalised world, such visits become necessary and mutually useful.  Meanwhile, whether or not the bid for a seat on the Security Council succeeds in the foreseeable future, Modi cannot be faulted for not trying. Enlisting the support of as many nations as possible is a good beginning and Modi did well to rope in Japan, Germany and Brazil for this vital reform of the UN system. All in all, his second visit to the US too was a grand success, never mind what the jaundiced and jealous Congress nitpickers have to say.