Mamata Banerjee has no qualms flirting with either the BJP or the Congress, writes Ashutosh

After breaking from the Congress in the 1990s, she aligned with the BJP and was cabinet minister in Vajpayee’s cabinet. Then she formed an alliance with the Congress and was again a minister in Manmohan Singh’s cabinet. Her adviser Prashant Kishor, who today calls Modi dangerous for democracy, helped the same Modi in his election campaign in 2014
Ashutosh 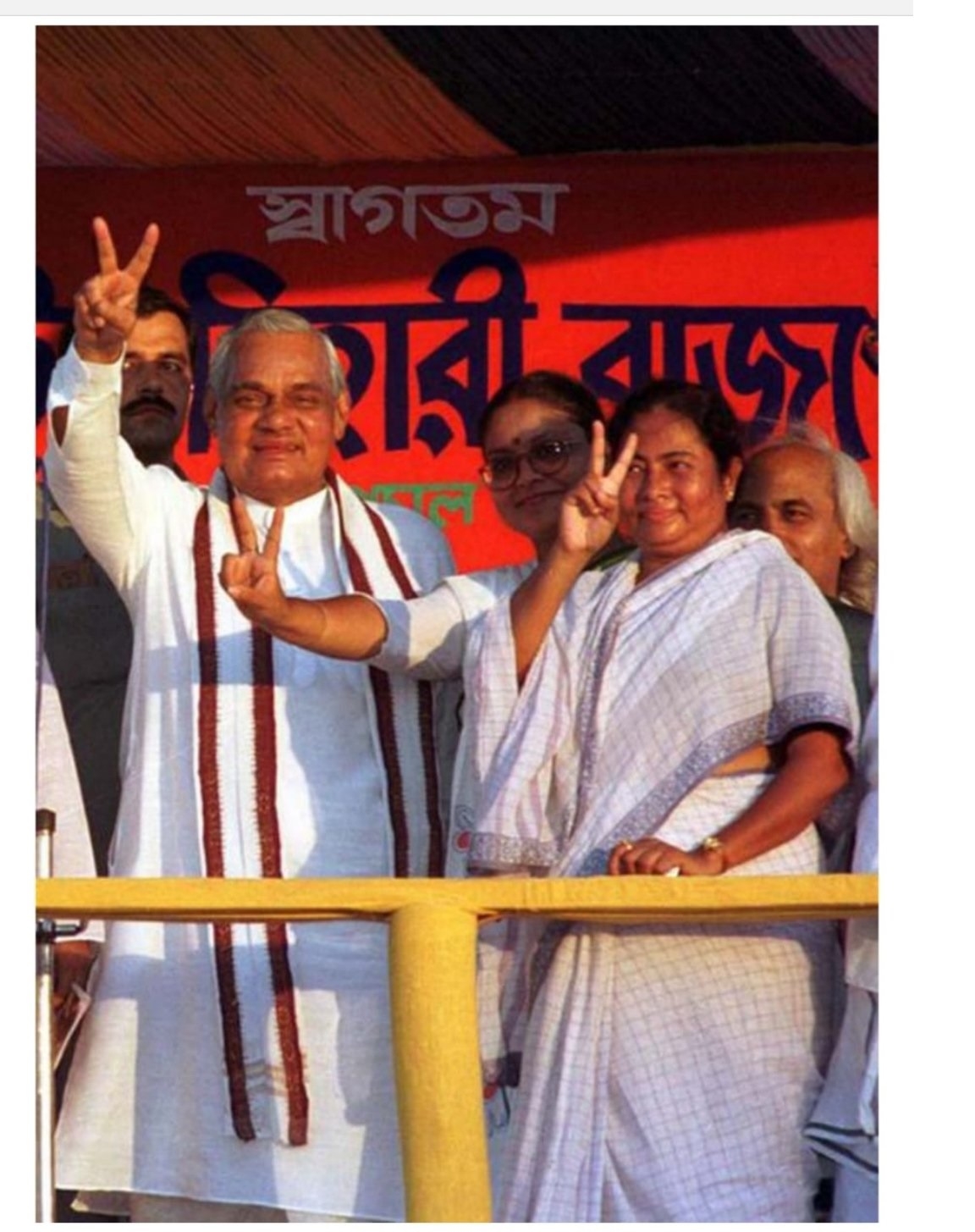 How will history judge Mamata Banerjee’s historic deviation? Will she be seen as a temperamental mercurial leader who carved her own course to fulfil her ambition to be the Prime Minister or will she be seen as a political opportunist who backstabbed opposition unity at the most opportune time for lack of ideological training? Or will she be referred to as someone who was misguided by her advisers driven by personal vendetta to settle scores with the main opposition party i.e., the Congress?

Mamata Banerjee’s somersaults in the recent past have stunned all those who have been shouting for a joint platform to defeat Modi and the BJP at the national level. This is mainly because it was she who had been harping on the theme and asking for all opposition political parties to come together if democracy was to be saved, if the federal structure of the Constitution had to survive.

It was she who in the middle of the Bengal assembly elections, wrote a long letter to all the opposition leaders, including Sonia Gandhi, appealing for unity. Therefore, it is a mystery what caused her to suddenly unleash a frontal attack on the Congress, accusing it of non-action and being an asset for the continuance of the Modi regime.

Furthermore, she has also unleashed a well-structured plan to wreck the Congress from within and create an opposition ‘morcha’ which excludes the Congress. She has been poaching leaders from the Congress and contesting elections in states where she has no base, with the objective of weakening the Congress party.

Now the moot question is, can an anti-Modi front be formed minus the Congress? Hypothetically, the answer might be yes, but realistically, it looks like a suicide mission which will ultimately benefit Modi and the BJP, the very people that Mamata has vowed to defeat. Mamata Banerjee is a clever politician. I refuse to believe that she is unaware of the repercussions. Then the question arises -- why is she doing this? That is a riddle which needs to be decoded. I can find three plausible explanations for her deviation.

First, despite being in politics for more than four decades Mamata Banerjee is not an ideological person. She is, at best, a career politician whose only ambition is capturing power. After defeating the BJP with a massive margin in Bengal, she could easily aspire to be the Prime Minister. That is only possible if she positions herself as a strong leader with a national footprint. In the recent past, her electoral forays in Tripura and Goa and poaching leaders from Bihar, Haryana, UP and Assam bear testimony to her political calculation. But except for Tripura, she does not seem to be creating any meaningful impact in any other state.

Second, one of the bigger tragedies of modern politics in India has been the dearth of leaders with a national understanding and a vision for the future, along with a sense of history. In the early 1950s, 1960s and 1970s, India was privileged to have great leaders like Ram Manohar Lohia, Jayaprakash Narayan, E M S Namboodiripad, Jyoti Basu, Atal Bihari Vajpayee etc. who were towering figures heading small parties.

Even in the 1980s, there were Devi Lal, N T Rama Rao, Ramkrishna Hegde, V P Singh, Harkishan Singh Surjit and Lal Krishna Advani, who despite having very limited geographical appeal, possessed a national perspective. Today, the opposition leaders are not only limited by territorial boundaries but also constrained by the lack of a national outlook. Their only concern is to remain powerful within their states and continue as CM either by hook or by crook. They are willing to make any compromise to remain in power and can align with any ideology, secular or communal.

Who is the real Mamata Banerjee?

Mamata Banerjee had no qualms flirting with either the BJP or the Congress. After breaking from the Congress in the 1990s, she aligned with the BJP and was cabinet minister in Vajpayee’s cabinet. Then she formed an alliance with the Congress and was again a minister in Manmohan Singh’s cabinet. Her adviser Prashant Kishor, who today calls Modi dangerous for democracy, helped the same Modi in his election campaign in 2014.

So, who is the real Mamata Banerjee? The Mamata Banerjee of today who finds Modi and the RSS communal and fascist, or the Mamata of yesteryears who had aligned with the BJP? The RSS and the BJP are the same; they did not change their ideology. Mamata did, and that shows Mamata’s opportunistic politics and proves that there is no guarantee that along with her advisers she might switch again and align with the same Modi whom she now finds dangerous.

Third, there is a strong possibility that behind her aggressive demeanour, there resides a scared leader. She is being projected by the media as the one who defeated BJP massively in Bengal. This is a wrong narrative. In fact, it is the other way round. It was the BJP which fought valiantly and scared her to death though I don’t agree with BJP’s tactics.

The BJP fought like an invading army and Mamata had to save her fort. Along with the political pundits, she too was not sure if she would emerge victorious. Though the BJP lost in the end, it still managed to get 38 per cent votes. The same BJP had a negligible presence in the 2012 assembly elections. The BJP was a non-entity till the 2019 Lok Sabha elections in Bengal, when it got 40 per cent votes and 18 seats.

Likely to be upstaged

Mamata Banerjee should know that if the BJP continues like this, there is a very serious possibility of her being upstaged in the 2024 parliamentary elections. It has been observed that the BJP gains more than 8 per cent to 26 per cent votes in parliamentary elections vis a vis assembly elections. If this phenomenon continues, then the possibility of the TMC’s seats coming down to single digits in 2024 cannot be ruled out. Being a shrewd politician, Mamata Banerjee knows that this can be neutralised only by projecting herself as a national alternative to Modi.

This can very well be understood by the Delhi elections. The AAP was victorious in 2015 and 2020, with 67 and 63 seats out of 70 in the assembly elections but in the parliamentary elections, it lost all seven seats, as voters felt that Arvind Kejriwal couldn’t be the Prime Minister, so why vote for the AAP. In the 2018 assembly elections, the BJP lost Rajasthan, MP and Chhattisgarh but in just a few months, it swept the polls in these states in the parliamentary elections of 2019, as voters did not believe that Rahul Gandhi could be an alternative to Modi. This binary of parliamentary and assembly elections might be a cause of concern for her and if Mamata Banerjee loses to the BJP in 2024 then her national stature will diminish.

Whatever may be the case, Mamata Banerjee’s gain will be a big loss to the opposition. Her short-sightedness and parochial outlook at this juncture of history when the country is facing the biggest onslaught on its democratic values and constitutional structure, will deal a crushing blow to the forces fighting to save democracy. I don’t know how much she listens to her advisers, but she might know that the Greek city of Troy was demolished by a Trojan horse. At a time when all kinds of conspiracies are being woven, what is the guarantee that someone is not exercising the ‘divine right’ to wreck the opposition from within, to instal a Hindu Rashtra?

The writer is Editor, satyahindi.com and author of Hindu Rashtra