Make or break in Bihar polls 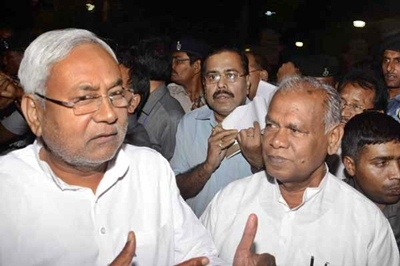 The elections in Bihar will be announced soon, but this is one of those states where the campaigning has already begun. Alliances are being forged, public meetings being held as the Bharatiya Janata Party ruling at the centre, and the Janata Dal(United) governing the state, are pitted against each other in what both sides recognise as a ‘make or break’ election.

Prime Minister Narendra Modi has started addressing public rallies across Bihar. Chief Minister Nitish Kumar is trying to puncture the campaign with his own meetings, and homilies, the latest being his open letter to PM Modi where he has asked him to take back his comments wherein he questioned the JD(U) leader’s DNA. The BJP is nurturing and projecting former CM Jitan Ram Manjhi as a Dalit leader who was unfairly pushed out by the JD(U) at the instance of Nitish Kumar. The latter attacking this, has maintained that the Prime Minister was questioning the DNA of Bihar, and that was in itself discriminatory.

It is too early to predict the possible outcome of what will be a keenly contested election, but it is not too early to point out that the results of the polls will have a direct impact on the future of the BJP, or for that matter the future of the Opposition in immediate terms. Bihar is a crucial Hindi heartland state, and given the fact that the BJP had done exceptionally well here in the Lok Sabha elections, a repeat performance will bolster it substantially across the country with the clear message of endorsement for PM Modi and his government at the centre. Defeat will be devastating, as it will encourage those within the BJP and others to speak out their woes; will lead to pressure to review current policies being driven essentially by PM Modi, BJP president Amit Shah and the RSS to some extent; and will expose the chinks in the BJP armour as the remaining four years of the government at the centre roll by.

For the Opposition, Bihar spells an opportunity, and at levels, a last chance. The Jd(U)-Rashtriya Janata Dal-Congress front that has come together, needs to win to keep itself afloat, and even more so to strengthen itself before the next general elections. The consolidation of the anti-BJP vote that the Opposition is certain is in Bihar, as in other parts of India, needs to happen in Bihar for the message of unity to be heard and felt in other states that will be facing elections in the coming years. Punjab for instance, is next in line. Failure will spell the end of Opposition unity at the ground level for a while, and will certainly usher in the last days of Nitish Kumar and possibly the JD(U) as it is today.

Given the high voltage communalisation of Bihar that the BJP and RSS are currently working on, defeat for the Opposition will also hasten this polarisation moving it out of the stage of ‘experimentation’ to ‘legitimisation.’ Uttar Pradesh has not recovered—in the absence of an effective state government -from the Muzaffarnagar violence that effectively destroyed the bonhomie between the Jats and the Muslims in western UP and allowed the resulting communal polarisation to bring in the BJP across the state. It was a sweep that has virtually destroyed the efficacy of the regional parties in India’s largest state, rendering both a major blow in the process.

The JD(U) is clearly worried about the communal polarisation that the BJP and RSS is attempting in Bihar. Senior leader Pavan Varma has written on the use of communal and money power in the state, and although he has not said so, all politicians know it is difficult to counter the former without an equally strong weapon. Nitish Kumar, not being a Mulayam Singh fortunately, has kept his police forces on alert and is being forceful in his opposition to communalism but even so, it’s a tough call in every sense of the word. More so, as violence and unrest is easier to ignite than to prevent as even contemporary political history has demonstrated through the northern states of India.

In the midst of this, the role of the Left parties is strange, and again difficult to understand. The CPI(M) and CPI have entered into a unity deal with the CP(M-L) under the larger decision to work for Left unity. The rigidity of the decision holds them in bondage, as they have decided to open a third front to contest the Bihar polls. In other words, they will field candidates across the state and it does not take special intelligence to know that while they might not win a single seat in the state, they will cut into the vote bank of the JD(U) led alliance. And in an election as crucial as this, and as closely contested, this could make all the difference between defeat and victory for the forces currently trying to fight the BJP from gaining control of the state.

JD(U) leaders have tried to reason with the Left leadership, but to no avail. They have been asked to make Bihar an exception to their rule of forging Left unity but the response has been negative so far. If the CPI and CPI(M) decide to reach an understanding with Bihar’s ruling party, the M-L will definitely leave the alliance as for it, the latter is  the bigger evil in Bihar than the BJP. But if they do not join the other ‘secular’ parties that have come together, and the latter is defeated in the Assembly polls, the Left will have to bear the cross of yet another ‘historical blunder’ as this will not be an ordinary defeat, but a major boost for the BJP that will strengthen across the country.