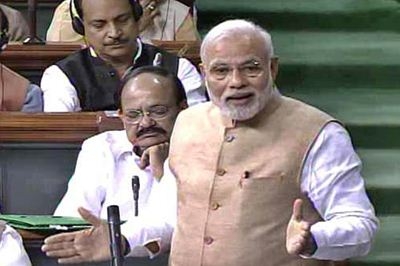 After 18 months of eye-ball-to-eye-ball confrontation in Parliament, the BJP and the Congress have realised that hubris and negativism will not serve their or the nation’s interests. So, after a long spell of washouts and disruptions, it is pleasing to see that the winter session of Parliament has commenced on a positive note and the House is set to legislate a slew of crucial reform bills besides discussing important issues.

Prime Minister Narendra Modi and Congress vice president Rahul Gandhi deserve credit for bringing about the thaw. The course correction, though, is not spontaneous, but out of political compulsions and pressure from the stake holders – India Inc and public opinion, is a welcome sign. The image of both Modi and Rahul had, in the last few months, taken a beating for varying reasons and they, apparently, are now trying to repair it.

Riding high on popularity charts, Modi raised great expectations among the masses as he promised the moon, literally. But his record in office in the last 18 months has been far from flattering. Failure to check skyrocketing prices, arrest the decline of rupee value, push big ticket reforms and rein in the Hindutva hotheads threaten to derail the governance agenda.

Nonetheless, it took two humiliating electoral defeats (Delhi and Bihar), BJP hotheads going out of control and the consequent  “intolerance” discourse besmirching the image of the government globally,  the unprecedented phenomenon of award wapsi  by a growing body of writers, artists and scientists with even non-partisan entities such as President Pranab Mukherjee, RBI governor Raghuram Rajan, Infosys founder chairperson Narayana Murthy and Biocon chairperson Kiran Mazumdar  flagging the “intolerance” issue and the complete wash out of the monsoon session – for the PM to realise that he may be in danger of losing the governance script.

While Modi had his own compulsions to change tack, Rahul, seeing diminishing returns in Parliament blockade, was forced to go in for a course correction as well. The Congress gained nothing out of the logjam but blocking the bills, while the BJP strategists succeeded in propagating that Rahul is anti-reform, something that frazzled the Grand Old Party, the original reformer.

And no wonder,  albeit belatedly, last week he reached out to the Congress leadership – first time in 18 months – to iron out differences over the crucial Goods and Services Tax bill hanging fire since over a decade due to lack of political consensus. And if everything goes well, the GST bill will get Parliament nod before the winter session concludes on December 23.

While Modi had his own compulsions to change tack, Rahul, seeing diminishing returns in Parliament blockade, was forced to go in for a course correction as well. He was instrumental in rendering monsoon session a washout as he injudiciously took a maximalist position in the Lok Sabha over Lalitgate and Vyapam scam, but he failed to sustain the attack and towards the end of the monsoon session, the issue petered out.  The Congress gained nothing out of the logjam but blocking the bills, while the BJP strategists succeeded in propagating that Rahul is anti-reform, something that frazzled the Grand Old Party, the original reformer.

A chastened Rahul changed tactic for the greater good of the Congress, industry and the nation as he decreed that the party will not stall the winter session without any rhyme or reason and that far from being obstructionist it will back key bills such as the GST provided the government amends the draft to incorporate certain suggestions put forward by the party to make the law holistic.

Away from media glare, the Gandhi scion has been building bridges with the corporate sector for some time now. A fortnight ago, he confabulated with a select group of foreign institutional investors to discuss his vision of the economy and allay the impression that he was anti-business.

Rahul, who in the past had focussed excessively on “aam admi” and minorities at the cost of India Inc and the aspirational class, is apparently trying to make amends and send out the right signals to the industry and middle class. The Gandhi scion, who in a few months time is slated to take the reins of his party, has displayed some signs of maturing as a politician and if he persists with the constructive engagement and politics it will do a lot of good to the Congress party.

Modi too appears to have shed hubris and confrontationist attitude towards the Opposition. He still has the time to win over his critics, rein in the lunatic fringe in the BJP who are hijacking the governance agenda and bring the economy back on track.   Winter session may end on a cheerful note, but the government has to face several more sessions before its term ends in 2019. As such, it should be his constant endeavour to engage with the Opposition, in particular the Congress, which is the largest party in the Rajya Sabha where the government is in a minority and may remain so during Modi’s tenure as PM. So, a sagacious way would be to keep the Opposition pleased, at least occasionally.

Last week, replying to a debate on the Constitution as part of the 125th birth anniversary celebrations of Bhimrao Amedkar in the Lok Sabha, Modi tried to mend fences with the Congress lauding former PM Pandit Jawaharlal Nehru and two hours later he met Sonia Gandhi and former PM Manmohan Singh to discuss the GST bill.

While on the one hand Modi is trying to reach out to the Congress, BJP leaders such as Subramanian Swamy, do everything to antagonise the Gandhi family. Swamy had, a few days ago, written to the Lok Sabha speaker seeking to unseat Rahul Gandhi from the House alleging that he is a “British” citizen. After Swamy went public with the charge, the Supreme Court threw out a PIL filed by one Sharma questioning Rahul’s nationality terming the petition “frivolous”. Can the PM succeed in his political management if he does not have control over BJP’s motor mouths who have nothing to lose?