Kanhaiya Kumar: Red star of Left to triumph in Begusarai? 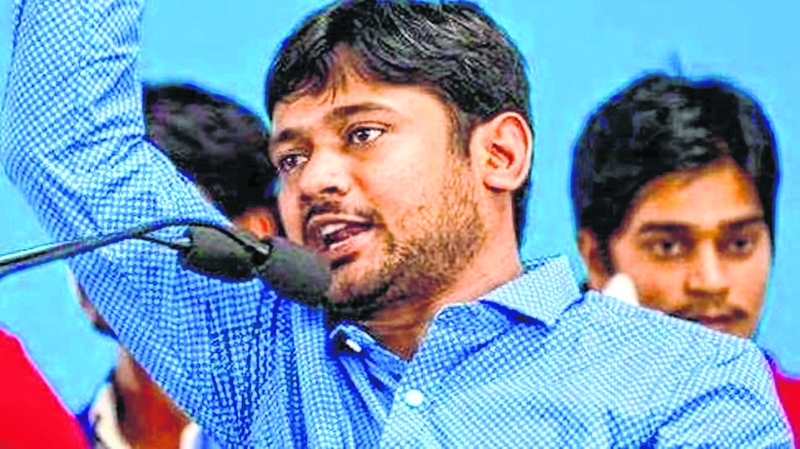 The significance of Kanhaiya Kumar is his unexpectedness: he came almost from nowhere and suddenly he was all over the place, dominating headlines, getting support from political parties, liberals and intellectuals, hogging attention and glare of publicity that is usually reserved for people who suddenly emerge from insignificance to become a national phenomenon. Two recent examples come to mind immediately: Anna Hazare and Arvind Kejriwal. While Anna has lost his relevance now and Kejriwal has lost his halo, Kanhaiya is the rising ‘red star’ of Left politics.

Anna had emerged from obscurity in a village called Ralegan Siddhi in Maharashtra to become a national phenomenon with his anti-corruption stir against the UPA-2 government. Along with his aides, Anna led a movement for the Jan Lokpal Bill. The amplifier effect of television and social media platforms gave Anna a larger-than-life presence on the national landscape, as he became the face of middle class angst against corruption. Probably Anna’s agitation would have fizzled out had the government not made a few mistakes. One of them was the arrest of Anna and his top aides on the eve of their hunger strike at Ramlila Maidan. Two nights in jail made him into a national celebrity. Narendra Modi was a direct beneficiary of the anti-Congress upsurge created by the Anna phenomenon.

Another direct beneficiary of the Anna phenomenon was the bespectacled Income Tax official who, after grabbing headlines through persistent use of Right to Information Act, moved on to the anti-corruption bandwagon and became Anna’s trusted aide and finally went to become the chief minister of Delhi, not once but twice. Arvind Kejriwal is the first in recent Indian politics to register a meteoric rise. Road to political leadership in India is long and arduous. But Kejriwal broke the convention. Kanhaiya Kumar could be the next to steal the limelight from established politicians in the on-going general elections.

Kanhaiya is a symbol of dissent and ‘azaadi’ (freedom), ‘not from, but in India’ from casteism, communalism, intolerance and majoritarianism. For his supporters, he is a moving ‘Statue of Liberty’. The vast number of his supporters, followers and sympathisers include students, youth and high and mighty intellectuals, political leaders of various parties and ideologies and an influential section of media. He is a phenomenon that was created by the current government that mishandled an event in the Jawaharlal Nehru University (JNU) in February 2016. The JNU event and subsequent developments in the campus were driven by the ABVP’s overweening ambition to expand its footprint in campuses where it had little presence. But the campus rivalry was dragged into a political battle by the central government.

Kanhaiya would have gone down as just another student leader, but for the heavy-handed state intervention by the Modi government. After 20 days in jail on flimsy ‘treason’ charge and a widely telecast physical assault in the court premises at the hands of saffron goons, Kanhaiya became a national celebrity and a pivot of nationwide debate on nationalism and dissent. As a member of CPI-affiliated All India Students’ Federation, he made it a point to stress in all his interviews that he was just a student leader, not a ‘neta’. But thanks to his oratorical skills and instinctive ability to strike the right chords with disenchanted students and youth, Kanhaiya’s personal and political appeal transcended ideological boundaries. The Modi government feared him because of his potential to mobilise people and influence his audience.

It was quite natural for him to join the CPI. Politically, CPI is almost insignificant in Indian politics. But Kanhaiya’s political relevance transcends boundaries of CPI, or the whole of Left. He may not be a leader yet in conventional terms, but the man from Begusarai and the CPI’s candidate from this Lok Sabha constituency in Bihar is already a hero in his own right. Once upon a time, Begusarai was called the land of the rising ‘red star’ in North India. The ‘red star’ was none other than the redoubtable Marxist Chandrashekhar Singh, who had won the assembly by-election from Begusarai north in 1956 as a CPI candidate. A year later, Chandrashekhar lost the assembly election by a narrow margin because of booth capturing by influential Bhumihar landlords who prevented OBCs and Dalits from casting their vote for the CPI candidate.

Interestingly, Kanhaiya is an upper caste Bhumihar. Members of this community are said to have earned the discredit of being the biggest perpetrators of atrocities against Dalits. But by identifying with the Dalits, and often speaking for them, Kanhaiya has succeeded in breaking the casteist myth that you to have to be one of them to speak for them. His catchy slogan, Lal Salam, Neel Salam, makes him a popular leader amongst the Dalits of Begusarai. CPI and CPM are not significant parties in Bihar politics, while the CPI-ML which is in the forefront of fighting for Dalit issues has some presence there. Begusarai is no more a ‘red star’ constituency and CPI may be fighting for its political survival there, but as a CPI candidate, Kanhaiya has made the Begusarai contest extremely interesting. Like Chandrashekhar in the 1950s, Kanhaiya is also seen as a rebel who is raring to challenge the established leadership of the BJP and the RJD in Bihar.

The contest in Begusarai is triangular. Kanhaiya’s opponents are BJP’s motor-mouth Giriraj Singh and RJD’s Tanveer Hassan. Kanhaiya has dismissed the notion that Begusarai is a triangular contest and has desisted from attacking the RJD and Tanveer in his campaign. Tanveer also does not consider Kanhaiya as his primary opponent. Both consider themselves as the original challengers to the BJP and its candidate. Begusarai voted in the fourth phase of election on April 29. It is said to be a tight contest. It will also be a keenly watched contest because it is a battle between the voice of change and the status quo represented by the two mainstream parties.

Begusarai is one of the most backward districts in the country. The CPI has not won this Lok Sabha seat since 1967. It has seven assembly constituencies and the CPI had a strong presence in all the seven constituencies till about 25 years ago. However, it controls unions of workers, students and farmers. Kanhaiya’s fight is against the powerful and affluent candidates and it is to be seen whether his humble campaign will beat the odds. Rising through subaltern rage and aspiration, Kanhaiya is a representative of people’s power. He may or may not triumph, but his story is of a stunning rise.

The author is an independent senior journalist.