India’s future may lie more with Russia and China than with the US, writes RN Bhaskar

The wheel is spinning rapidly. And India will have to be prepared with more jobs, more exports, and not dream of more Agnipaths

In 2009, this author had predicted that India, China and Russia would have to work together. Geo-politics suggested this combination. During the past 15 years, China appears to have understood the geo-political implications of this constellation much better than India has. Some of these realisations sank in gradually. Some accelerated by the Russia-NATO-USA-Ukraine conflict.

Ironically, the country that has accelerated this realisation is the US. It all began because the US planners thought they were smarter than the rest and could corner and then decimate Russia. The US had three objectives – first isolate Russia. Second break the links between Germany and Russia. And the third to scuttle the Nordstream2 pipeline. That would ensure that the US could sell more gas to Europe at higher prices. There was a fourth advantage the US was certain would come its way – that it would be able to sell more arms in case Russia attacked Ukraine just as it expected it to. The US succeeded in scuttling the Nordstream2 pipeline. But the brunt of the pain was faced by Germany and the rest of the EU, not Russia. In fact, it is surprising that Germany has taken this lying down, because it will be the biggest casualty in this entire crisis that the US has created. The biggest winner is Russia.

First, look at the way the oil and energy markets have changed. Germany used to be the largest market for Russia. But China has just dwarfed it. Russia has also stated that it will reduce gas supplies to the EU in the coming winter months because of technical reasons. One is not sure if this is the permafrost problem that companies like Schlumberger used to handle.

The US ordered these companies out of Russia. Consequently, engineers from China and India are trying to help Russia deal with the permafrost issue which can choke up oil and gas pipelines in the severe Siberian winter. The US lost a vital piece of global business. Other countries depended on Russian hydrocarbons are Italy, the Netherlands, France, and Belgium. You can now appreciate how much the EU will begin to hurt. Plans are afoot to start using coal instead. Goodbye climate control and carbon capture.

Germany saw its trade surplus narrow sharply to €9.7 billion in March 2022 from €20.7 billion a year earlier, as exports to China, the UK and Russia fell while imports continued to rise at a double-digit pace. Exports were up 8.1 per cent YoY to €137.4 billion and imports jumped 20.1 per cent to €127.7 billion. There will be more pain to come.

The loss of European markets hasn’t hurt Russia. Thanks to demand from other countries – notably China and India, it will still make money even if it sells oil and gas at discounted prices. Moreover, Russia and China together control most of the key mineral inputs the world requires. Russia’s land mass is three times that of China and the US. Sanctions against Russia only made global prices go up, and Russia began demanding higher prices in roubles through some friendly countries as well. As a result, while Russia’s current account deficit improved smartly, the US continued to limp along with an increasing trend of deficits. Consequently, almost the entire western world has become weaker, while Russia and China have emerged stronger. No wonder then that Joseph E Stiglitz, Nobel Laureate in economics, wrote that “the US could lose the new cold war” . 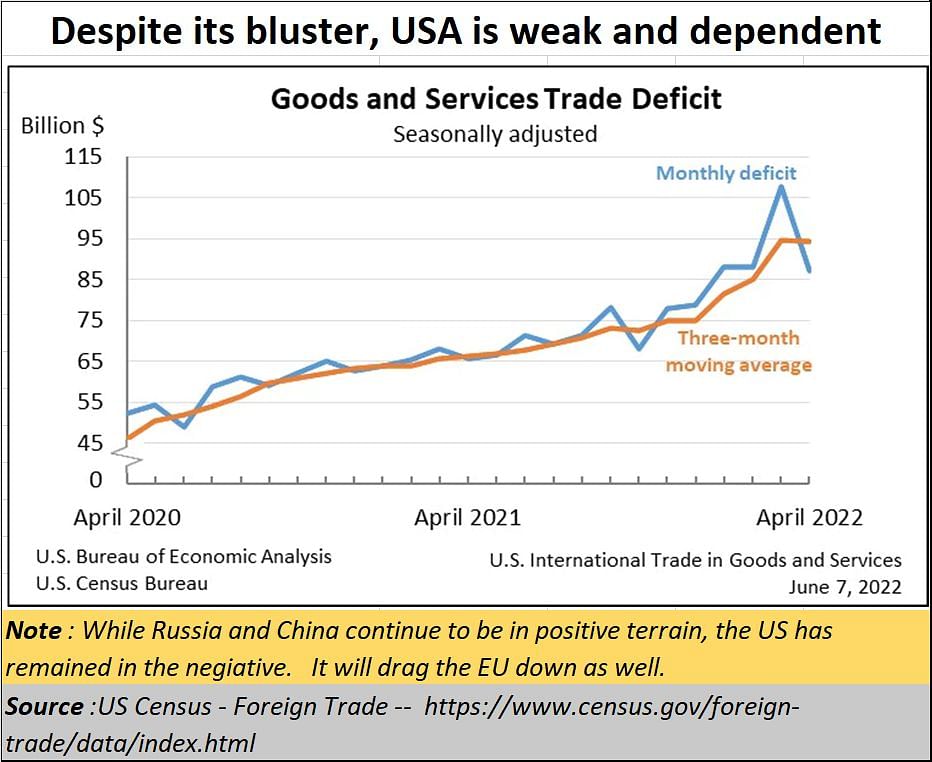 He goes on to add, “The United States appears to have entered a new cold war with both China and Russia. And US leaders’ portrayal of the confrontation as one between democracy and authoritarianism fails the smell test, especially at a time when the same leaders are actively courting a systematic human-rights abuser like Saudi Arabia. Such hypocrisy suggests that it is at least partly global hegemony, not values, that is really at stake.”

Worse, there are signs that the US may not be able to fund its ambitious plans to remain in the forefront of the information technology world. As Bloomberg reported on 24 June 2022, “The US promised chipmakers about $52 billion to boost the industry inside the country. Now, it looks like that money might not arrive—a development that’s already threatening to upend manufacturing plans. . . . . Right now, some of the biggest companies in the industry, including Intel Corp., Taiwan Semiconductor Manufacturing Co. and Samsung Electronics Co. are either planning to build or already building plants in the US, spurred in part by the promise of government incentives.” Some of these plans look less certain now.

In 2009, when this author wrote about Russia, India, and China, it was felt that Germany could be the catalyst. But it appears to have fallen off the map. Now Russia has taken the lead. It is talking of bringing India into its embrace. Indian retail chains are being invited to Russia – the Walmarts will not be missed – and Russian IT firms are making their way into India.

Russia’s economic clout got strengthened by Switzerland’s decision to import 3 tonnes of gold from Russia. That represents 2% of world gold imports. According to some sources, gold is the second biggest revenue earner (after oil) for Russia. That, in turn. may have prompted the US to try persuade the G-7 countries to ban the import of gold from Russia.

Such a move could be extremely difficult to implement, because gold is highly fungible, and easily transportable. Moreover, such a ban, if implemented, may only make gold more expensive, which could mean more money for Russia and other gold miners. Moreover, such moves may actually wreck global financial markets further. However, any way you look at the situation, Russia is now wealthier, economically stronger, and even in a more formidable position than it was during the pre-Ukraine-war days. Meanwhile India has yet to find its feet. As of May 2022, its trade deficit was revised slightly higher to $20.11 billion in April 2022, compared to a preliminary estimate of $20.07 billion and $15.29 billion a year earlier. Imports jumped 30.97 per cent year-on-year to $60.3 billion, despite discounted oil imports from Russia. And its rupee is weakening against the US dollar. At the rate at which India has been slipping, it won’t be long before it may look to Russia for support.

In the meantime, China too has begun working with India. At the BRICS summit, Xi Jinping was more candid than he has often been. He said “Some countries attempt to expand military alliances to seek absolute security, stoke bloc-based confrontation by coercing other countries into picking sides and pursue unilateral dominance at the expense of others' rights and interests.

"If such dangerous trends are allowed to continue, the world will witness even more turbulence and insecurity . . . . . It is important that BRICS countries support each other on issues concerning core interests, practice true multilateralism, safeguard justice, fairness and solidarity and reject hegemony, bullying and division."

In an effort to improve India-China cultural ties, China even celebrated the Yoga Day with much fanfare. It is ironic that the US which once championed the cause of world trade without barriers, should now be against it. China on the other hand has begun demanding a return to free trade.

So, what should India do?

India should immediately begin identifying the mines that its people could develop and operate in Russia on a revenue sharing basis just as ONGC-OVL does in the oil sector. That will help India achieve three objectives. It improves relations with Russia which could actually help defuse tensions between India and China. It creates thousands of jobs and wealth opportunities. Thirdly, the Russian mining sector is not left exclusively to the Chinese and other Asian countries.

Moscow has begun welcoming foreign investors to its Udokan copper mine in Southeast Siberia. Two of Russia’s largest copper mines are being operated by China. It has welcomed Chinese, South Korean, and Kazakh miners and refiners into the bidding process. There is no reason for India to be missing.

In the coming years, expect a greater sharing of military technology and production between Russia and China. Barely a week ago, China made it clear to the world that it would support Russia in defence as well.

The former has the best missile technologies in the world. The latter has the best stealth technologies aided by quantum computing where it is the global leader. That could give both an edge that many western countries might not be able to match despite the huge military spending that the US makes each year.

Instead of looking to the Agnipath scheme, it should send more of its workforce to Russia and help both its people and Russia out. It will improve the unemployment situation, and will allow India to position itself mor strongly among both the BRICS ad the ASEAN groupings.

The churn has begun. It will get more turbulent as the US tries to reinforce its writ on the world.

But as Stiglitz says, “Of course, America does not want to be dethroned. But it is simply inevitable that China will outstrip the US economically, regardless of what official indicator one uses. Not only is its population four times larger than America’s; its economy also has been growing three times faster for many years (indeed, it already surpassed the US in purchasing-power-parity terms back in 2015). . . . . China has excelled not at delivering lectures but at furnishing poor countries with hard infrastructure. Yes, these countries are often left deeply in debt; but, given Western banks’ own behaviour as creditors in the developing world, the US and others are hardly in a position to point the finger.”

The wheel is spinning rapidly. And India will have to be prepared with more jobs, more exports, and not dream of more Agnipaths. HomeAnalysisIndia’s future may lie more with Russia and China than with the US, writes RN Bhaskar