India has favourable demographics, and should see an expanding workforce till beyond 2050. But this population isn’t well educated, and health facilities aren’t what should have been expected in this country

In a brilliant paper by Morgen Housel (Three Big Things: The Most Important Forces Changing The World by, 31 August 2022) one comes to learn, indirectly of course, how India has contaminated its demography.

Housel’s study is on the US, and some of the data-points he analyses are gleaned from the US Census Bureau International Database. Sadly, it does not have similar information on India. 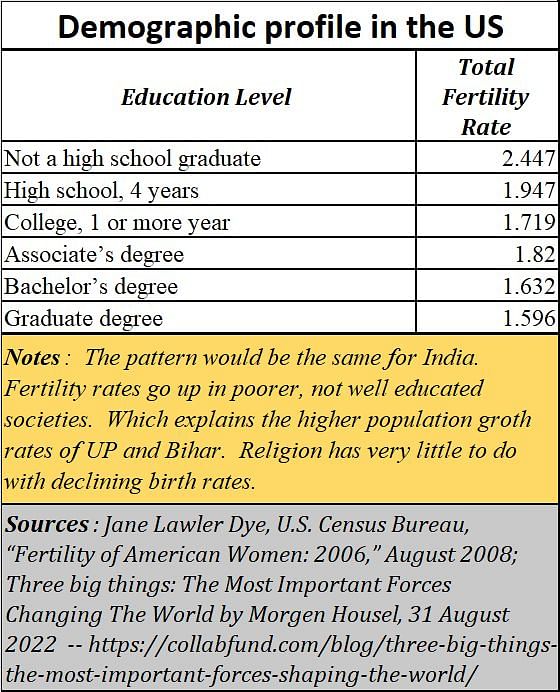 This is unfortunate because without information, there can be no analysis. And till one knows the extent of the problem, there can be no clear solution. The absence of data – which the government of India has been loath to provide -- leaves most analysts in a predicament similar to the blindfolded men analysing an elephant.

But some of the data is extremely relevant for India. Take the chart alongside for instance. It points to a clear correlationship between education and fertility rates. Religion has little to do with it. When quality education is provided to people, they become more employable. That makes them more affluent, and that in turn reduces population growth rates.

In India, one often hears people demonising communities for high population growth rates. That is illogical and misguided. It destroys good learning, and a refusal to understand fundamental factors borne out by good data.

But then, many Indian leaders did not believe in democratising education for almost two millennia. Yes, there were gurukuls. But they offered quality (that is a key operative word) education only to the sons of brahmins and kings. The commoner was kept out, even if he had the aptitude.

The legend of Karna in the Mahabharata bears testimony to such a practice. The only time when education got democratised in India was when the Buddhists set up Nalanda and Takshashila (Taxila) universities meant for everyone.

So good were they that scholars from overseas flocked to these centres of learning. Yet, when these universities got destroyed by invaders, Indians did nothing to revive them. They were ready to rebuild temples, not educational centres. It was only freedom fighters like Namdar Gopal Krishna Gokhale who believed that emancipation for Indians lay through quality education.

India has the unhappy track record of corroding even good educational institutions like the Banaras Hindu University. It was a great university once. It has slipped in quality and ranking, in much the same way as Indian Institutes of Technology (IITs) too have.

Without quality education, it is not surprising that India has the highest unemployment rates in this part of the world. 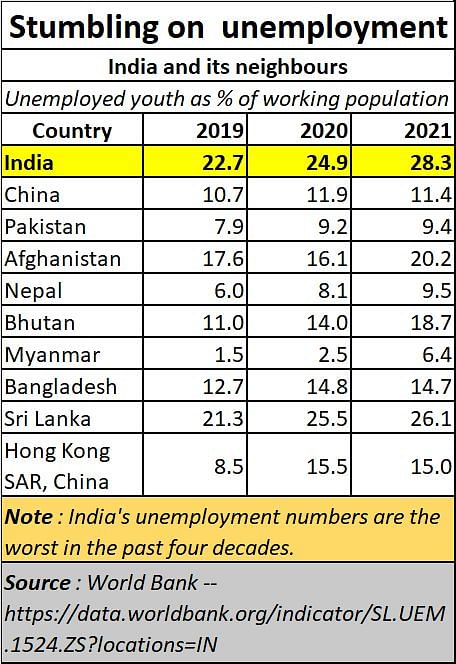 And this is where another bit of information becomes important. Housel talks about changing demographics in different parts of the world. India is missing probably because the data wasn’t made available. But the chart is significant for India for several reasons.

USA has managed to keep its working population growing by strategic shifts in its immigration policy, thus allowing a younger (and more fertile) population to join the ranks of an older (and less fertile) citizenry.

Unlike Indians who chose to settle down in the US, these newer immigrants are not as well educated, hence are willing to do the many manual jobs that the US wants filled up – like cotton and fruit plucking.

China too has enjoyed a great population growth but currently faces a challenge because of the growth rates shrinking with each passing year. 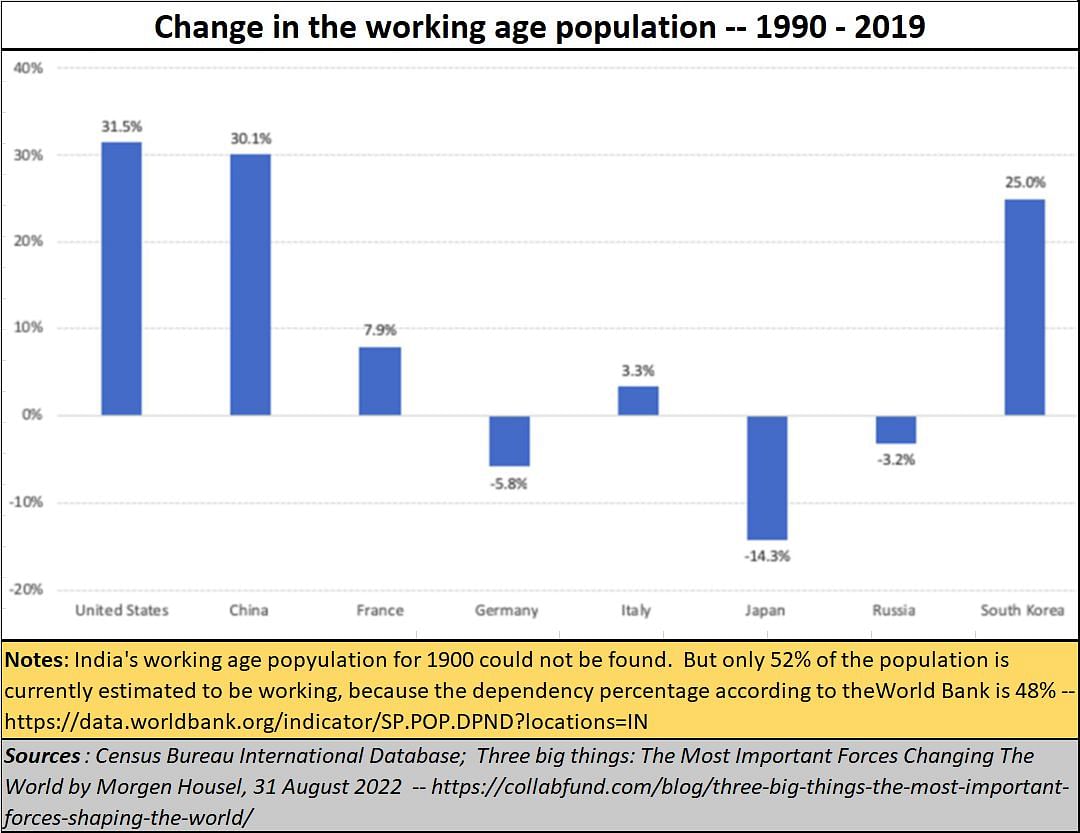 India has favourable demographics, and should see an expanding workforce till beyond 2050. But this population isn’t well educated, and health facilities aren’t what should have been expected in this country. India’s human capital index is terrible, and unless that improves, there are possibilities that the demographic dividend will become a demographic nightmare.

With more unemployment and poor education, many youths may be seduced into rent-a-mob opportunities offered by politically inspired zealots. That should be avoided at all costs.

If India must grow strong and prosperous, it must focus on education and health, and also ensure better employment opportunities. In other words, whenever optimists talk about an empowered India, they should first heed this county’s rankings on the HCI scale.

As things stand now, there is little to be proud of on this front. India scores 49 on this index (2020 figures) which is lower than that for Nepal and Sri Lanka. 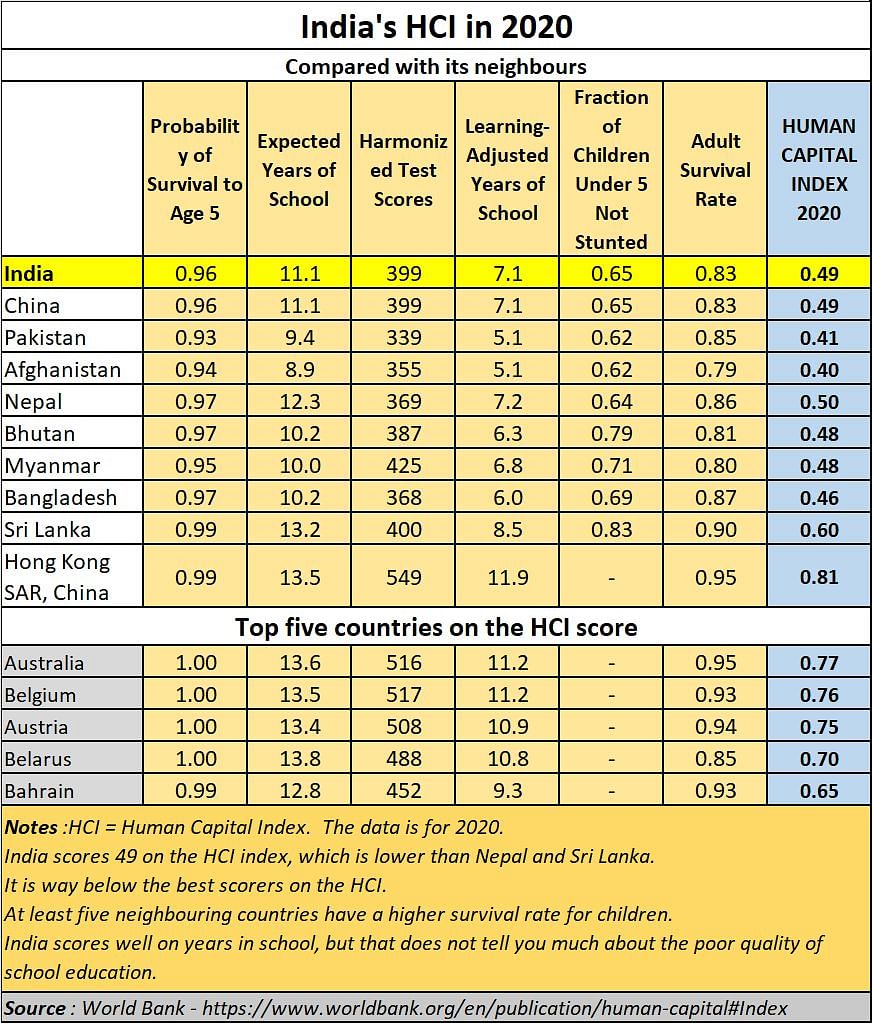 This may not matter much at present when there are few jobs to go around. But as the profile of India’s population changes, and older people begin to bloat the population pyramid, India will desperately need people who can pay for the care and protection of a rapidly ageing population.

But for such money to be put in long term investments of employment and wealth generation, India needs to be more friendly towards wealth generators. It should respect capital, and not frighten potential investors away through raids by Income Tax and Enforcement officials.

It must be remembered that over 35,000 high networth Indians have chosen to leave India during the past eight years. Just last year, about 1.6 lakh Indians surrendered their passports and opted for citizenship in other countries.

When the best begin to decamp, India may find the going tough. It needs to woo them back with less draconian laws, and by defanging the enforcement officials. In the ultimate analysis, it must learn to differentiate between a Nirav Modi and Mehul Choksi on the one hand, and a Vijay Mallya on the other.

Nirav and Mehul defrauded banks. Mallya was a wealth generator. If Kingfisher was in debt, it should have been sold off as a going concern, and not allowed to die leaving no residual value for the economy. Mallya was a creator of jobs. Cases like Vijay Mallya need to be treated differently, and not tarred by the same brush as with fraudsters and looters. 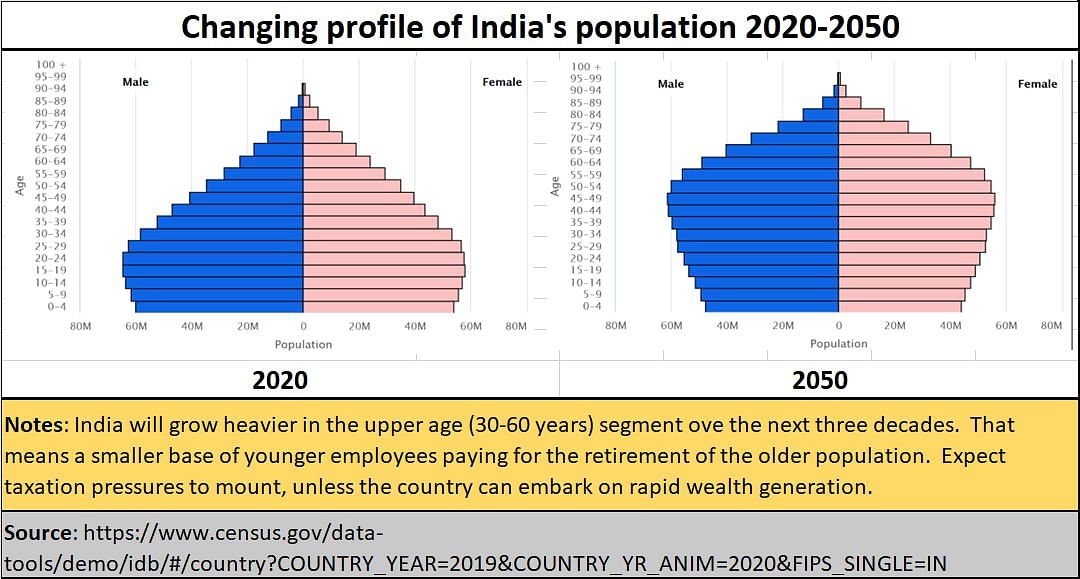 To conclude, India today has all the opportunities. The rest of the world is in disarray. China has yet to rebound. There is capital in the world seeking a good parking place. India can benefit from such conditions provided it has a friendlier face for foreign investors. It must also educate its younger population to take advantage of these conditions, which could add to India’s attractiveness.

If it can become friendlier, more respectful of laws, and more committed to education and health, it will see a surging HCI score, more FDI inflows and a more rapid pace of economic growth.

It is then that India will really emerge as a nation capable of greatness.

Fear is the key