In the second of the three-part series, a look at the Naxals’ ideology and tactics

In India, Naxalism owes its origination to a small village called Naxalbari, in the Siliguri area of Darjeeling situated in the NorthEast of West Bengal. Members of the Communist Party of India (CPI)-Marxist, led by Charu Mazumdar, Kanu Sanyal, Ram Prabhav Singh and Jangal Santhal caused an armed rebellion against the state and the existing feudalism. In 1967, they decided to form their ‘army’, take up arms, and resort to violence in order to give the poor their land back. They also decided to loot police armouries to ensure they have enough supply of arms and ammunition.

They were following Mao Zedong’s ideology. The movement soon gained some momentum and started making inroads in Calcutta. In 1969, the All India Co-ordination Committee of Communist Revolutionaries formed the Communist Party of India (Marxist-Leninist) (CPIML). After its formation CPI (ML) took over the ‘Naxalbari Kisan Movement’ and merged it with them. The new movement soon came to be called ‘Naxalites’.

For almost a decade the Naxals struggled to form a united front and spread their ideology. By 1980, it was believed that there were more than 30 fragmented groups operating with the same ideology, and their combined strength was close to 30,000 cadres. In 1980, the Naxal groups from Andhra Pradesh, Tamil Nadu and Maharashtra merged with CPI (ML) and a new outfit was formed – CPI (ML) (PWG). PWG being the short for People’s War Group. This merger was done under the leadership of Kondapalli Seetharamaiah. The newly formed group decided to appoint a leader for each state who would then spread the message and movement in that state. Kobad Gandhi alias Kamal was made in-charge of Maharashtra. From 1980 till 1995, the movement slowly but surely spread from West Bengal to Orissa to Chhattisgarh (which was then in Madhya Pradesh) to Andhra Pradesh and Maharashtra. As per reports, Maharashtra witnessed its first Naxal infiltration in 1980. Youngsters were recruited in Hyderabad and Mumbai (then Bombay) as part of their urban cadres, and they were made to carry out propaganda about the Naxal movement.

To spread the message and create more awareness about the movement, they started the ‘Shahid Saptaha’ (martyr’s week) which is held in July every year. As the name suggests, they honour their cadres who have died in police operations, this gesture also acts to add more people to their ranks.

The first major Naxal attack that took place in Maharashtra was in 1988 when a patrol vehicle carrying commandos of the State Reserve Police Force (SRPF) was targeted in the Rajura area of Chandrapur district. Seven soldiers of SRPF lost their lives. This attack brought into focus the impact of Naxals in Maharashtra and everybody stood up and took notice.

While the state government, the Maharashtra Police and the local administration began efforts to tackle the menace, Naxalism was fast spreading its tentacles within Maharashtra, especially in the eastern districts of Chandrapur, Gadchiroli, Gondia, Bhandara, Yavatmal and Nanded, while sleeper cells were formed in urban areas like Mumbai, Pune, and Nagpur. Right through the 1990s, there were several attacks on police forces in various regions as the movement spread. 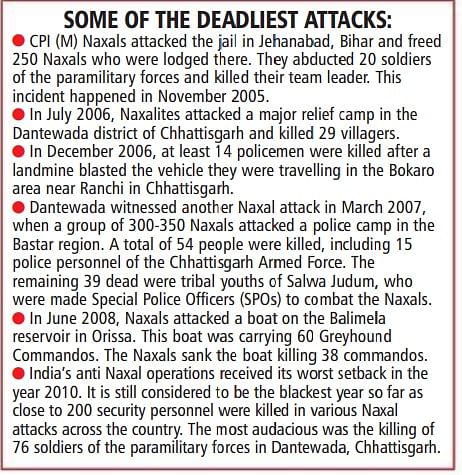 On September 21, 2004, CPI (ML) (PWG) merged with Maoist Communist Centre of India (MCCI) and a new outfit was born – Communist Party of India – Maoist or CPI (M). This merger changed the entire Naxal landscape in India, as it spread their influence from Nepal-Bihar till Andhra Pradesh and Tamil Nadu. By this time, Naxalism had spread across almost 40% of the country.

The first decade of the 21st Century witnessed some of the most violent Naxal attacks in India. From West Bengal to Chhattisgarh to Andhra Pradesh, Bihar and other parts, hundreds of policemen and civilians were killed in vicious attacks by Naxals.

Maharashtra witnessed its worst ever Naxal attacks in 2009. On May 22, 2009, information was received at the police headquarters in Gadchiroli that there was a roadblock in the jungles a few km away. A police team was immediately dispatched, but as the team reached the spot, a team of Naxal guerrillas ambushed it and killed 16.

In October 2009, a team of heavily armed Naxals attacked a police station in Gadchiroli. The sudden attack resulted in the death of 17 policemen.

A total of 52 policemen were killed in separate Naxal attacks in Maharashtra in 2009. It was a watershed year for the Maharashtra Police, as after that the force has ensured no major casualties. In fact, after 2009, the Maharashtra Police have been successful in quashing the Naxal movement in the state to a large extent. From 2009 till date, as many as 216 Naxals have been killed in various police operations, more than 500 have been arrested, hundreds of them have surrendered.

From having influence in five districts in 2009, the Naxals have today been forced to recede in just one small area of Gadchiroli. As per reports from the ground, only one Naxal platoon is active while all others have been decimated.

(The writer is the retired director general of police (DGP), Maharashtra & former chief of the elite Mumbai crime branch. He has worked in the intelligence bureau (IB) and was posted as DIG in Gadchiroli. He is also an award-winning author.)