Russian President Vladimir Putin has said he is ready to use nuclear weapons to defend Russian territory, raising fears that he might use a "tactical" nuclear weapon in Ukraine

Last fortnight was full of incidents that appeared to portend war, with all its ferocity and consequences that only nuclear warfare could unleash.

On 17 September, most people were surprised by a headline in the Financial Times talking about the seizure of Rosneft’s assets by Germany. At any other time, it would have only raised eyebrows. 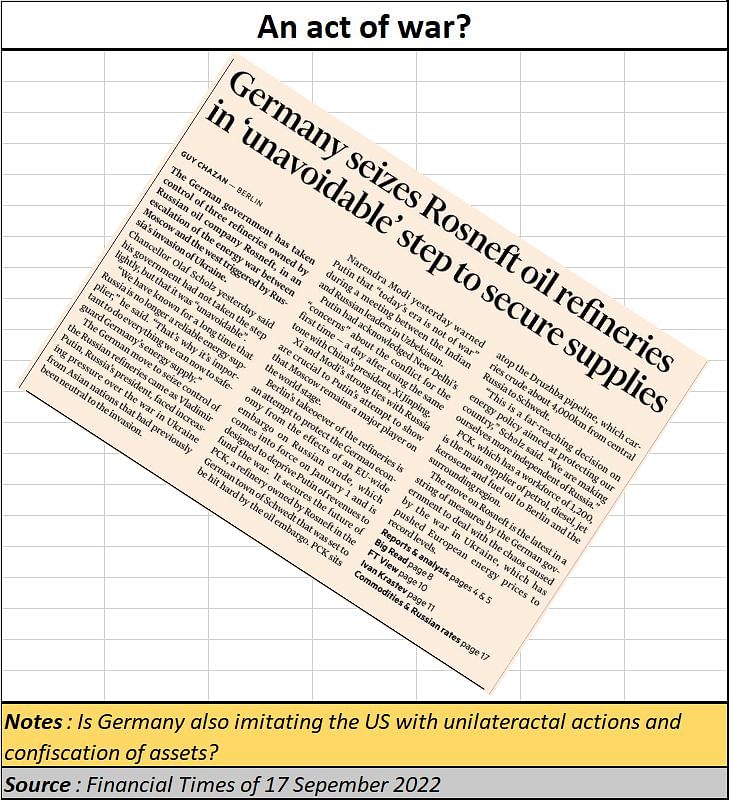 A sober country like Germany is not known to seize assets belonging to another country – at least not since the second world war ended. But now, there is a Russia-Ukraine war which is gaining in intensity.

It is a war that has been catalysed by Germany by refusing to honour a commitment its chancellor Helmut Kohl made to Mikhail Gorbachev in 1990. Its refusal to commission the Nordstream2 which was meant to bring double the volume of gas to Germany, eventually left Russia with little choice but to scrap all gas exports to Europe, especially to Germany.

The second blip on the horizon appeared on September 20 on Twitter, where a chart showed Germany’s inflation at 45.8% which was the highest ever in decades. It triggered memories of the conditions that ravaged Germany just before the second world war – high inflation, unemployment, and a willing to seize assets belonging to others. 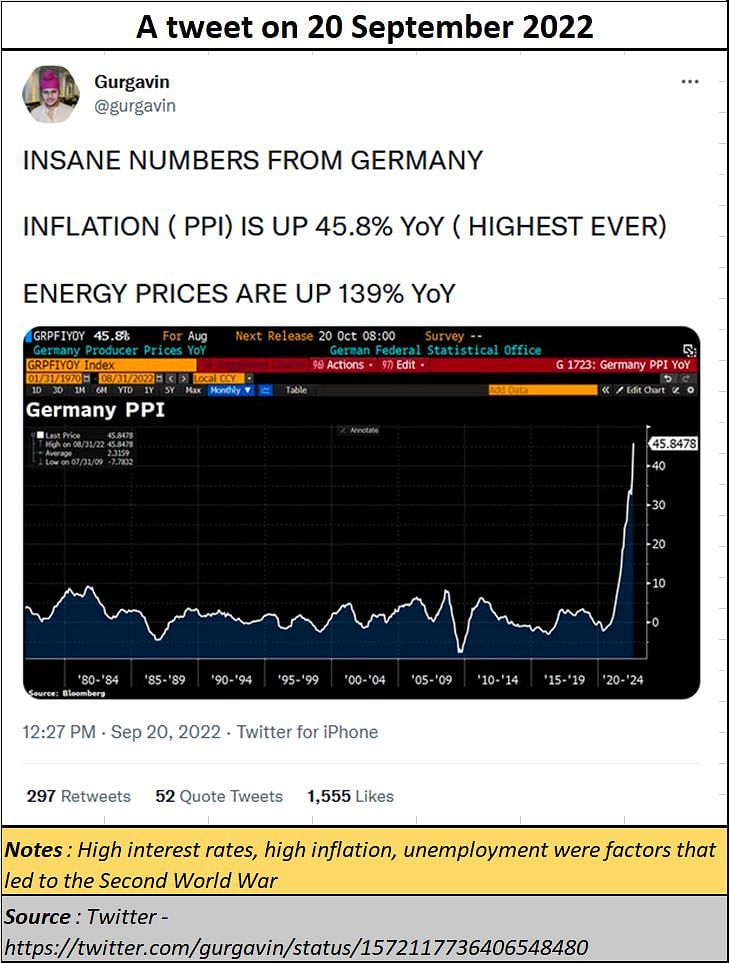 But there weren’t any signs of unemployment as yet. However, as newspaper reports pointed out on September 20, almost half the units in Germany could be forced into closure because of the inability to procure energy at reasonable prices. The Euro was at its lowest against the dollar, and Germany’s producer price inflation was the highest ever since 1947.

Then came Putin’s address to the Russian people on 21 September, that he was calling up about 300,000 reservists to provide reinforcements in Ukraine, where his military has recently been struggling.

He accused Western countries of “nuclear blackmail” and threatened to use Russia’s nuclear weapons.

“This is not a bluff. And those who try to blackmail us with nuclear weapons should know that the weathervane can turn and point towards them,” Putin said. In some ways, much to the chagrin of western powers, Russia had already showed that all the sanctions imposed on it had bounced off. The Russian Rouble was stronger than ever before, and Putin had more resources to continue the war for a longer period if required. But wars are debilitating, and sooner or later, Putin would call for methods that would escalate the war so that it could end soon. The escalation is a very frightening prospect.

Putin had given the same warning in 2015, when the US and NATO said that they were willing to consider Ukraine’s desire to join NATO. Even earlier, the takeover of Crimea had the same roots.

The US had been party to the discussions between Kohl and Gorbachev, and the US Secretary of State James Baker famously assured everyone that NATO would not expand an inch eastwards. The US was now abrogating an agreement at which several countries agreed not to allow NATO to expand eastwards towards Russia.

In fact, the writing was on the wall in 2015 itself when John Mearsheimer, the R. Wendell Harrison Distinguished Service Professor in Political Science and Co-director of the Program on International Security Policy at the University of Chicago, pointed to the worsening relations between US and Russia and warned of major skirmishes ahead.

On June 4, 2015, he made another dire prediction, that the US was pushing Ukraine into a war that could have disastrous consequences for Europe, the US and the world. Both predictions are coming true.

It is also worth listening to Mearsheimer at this lecture (the transcript can be got from here).

Amid all this sabre rattling, with the death rattle providing the chorus, the only sober voice that could be heard was surprisingly that of Donald Trump former US President. On 21 September, he said that that the conflict should never have happened and that it could lead to the third world war. He also said on his social media platform Truth Social that the conflict would not have come to pass if he were still in the Oval Office.

“But as I have made very clear for quite some time, this could now end up being World War III,” he said.

The present US president Joe Biden seems obsessed with provoking the conflict further. He is possibly swayed by the rah-rah cheers of the country’s infamous military industry complex which wants to sell more weapons.

But the going will not be simple. It is time that the US heeds the analysis of Mearsheimer in his article in Foreign Affairs on the 17th of August 2022.

As he says, “Washington and its allies are being much too cavalier. Although disastrous escalation may be avoided, the warring parties’ ability to manage that danger is far from certain. The risk of it is substantially greater than the conventional wisdom holds. And given that the consequences of escalation could include a major war in Europe and possibly even nuclear annihilation, there is good reason for extra concern.”

He then reiterates, “Moscow did not invade Ukraine to conquer it.” It was only to force Ukraine to abandon any plans of teaming up with NATO. 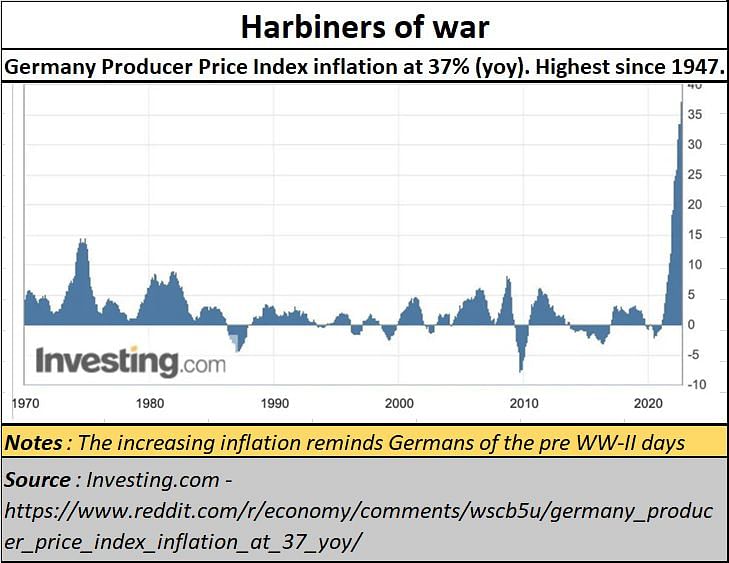 Bring in the nukes

Strangely, the US does not want to talk peace. Nor does Germany, which is already on the brink of a total collapse. That is why it was surprising to see India telling China and Russia to stop the war. It should have advised the US and NATO not to provoke the situation any further.

But then, maybe it was under tremendous pressure from the US. The world has seen how vicious the US can get when its requests for cooperation are not heeded. Remember the savage attacks on France when it refused to join the US’ Coalition of the Willing in the Iraq war?

It is unlikely that Russia will accept defeat that easily. As Mearsheimer points out, “Putin appears confident that Russia will ultimately prevail against Ukraine and its Western backers. "Today, we hear that they want to defeat us on the battlefield,” he said in early July. “What can you say? Let them try. The goals of the special military operation will be achieved. There are no doubts about that.” He goes on to say that inadvertently. “Each pathway holds the potential to bring the United States into the fighting or lead Russia to use nuclear weapons, and possibly both.”

He conjures up several possibilities.

It could be that Russia will attack NATO forces. Or it could allow Ukraine to damage the Russian controlled Zaporizhzhya nuclear power plant, the largest in Europe, to the point where it spews radiation around the region.

Mearsheimer quotes Dmitry Medvedev, the former Russian president and prime minister, who delivered an ominous response to that possibility, saying in August, “Don’t forget that there are nuclear sites in the European Union, too. And incidents are possible there as well.”

Should Russia strike a European nuclear reactor, the United States would almost certainly enter the fighting.

That is why India should have persuaded EU to persuade the US to de-escalate the war. Europe will be the first to experience the consequences of nuclear radiation – with depleted uranium (of the kind that the US used in Iraq) or otherwise.

Till now, people overlook the fact that Russia has not attached the energy grids, or train lines, or hospitals. But if war escalates, Ukraine will not be anything to remember it by. The consequences of a war are horrifying. And Putin has already stated that he is not bluffing.

The world is now at a razor’s edge. The first to fall will be Ukraine followed by Germany. That will draw the US in. After that, the result will be MAD – Mutual Assured Destruction. As for Europe, the time to say goodbyes may have started.

Fear is the key

Is Elon Musk staring at the winner’s curse?