HomeAnalysisGST growth does not mean that the economy is growing, writes RN Bhaskar

GST growth does not mean that the economy is growing, writes RN Bhaskar

There are speakers who tout India’s achievements, and some even claim that demonetisation was responsible for the country’s economic growth. Really?

GST growth does not mean that the economy is growing, writes RN Bhaskar | Picture for Representation
Follow us on

For the past month, there have been attempts to talk up India’s markets by pointing to surging GST collections. There are speakers who tout India’s achievements, and some even claim that demonetisation was responsible for the country’s economic growth. Really?

First, remember that GST is a type of expenditure tax, and the more you spend the higher is the GST collection. A year ago, the rule of thumb was that the collection was an average of 12% for every rupee spent. But lately, this could change. The government recently enlarged, significantly, the basket of good that would invite GST. It also increased substantially the rates applicable for many items. That could push up the average GST per rupee in percentage terms. Plus, there are also the factors of better compliance and a more efficient mechanism for collecting taxes using data mining.

There is another reason to be extremely sceptical when it comes to claims that higher GST collection rates indicate that the economy is doing well. It is extremely discomforting to find a country’s tax collection rates climbing by 34% while the country’s GDP is expected to grow by only 5.7% (UNCTAD figures -- https://www.financialexpress.com/economy/indias-gdp-growth-to-fall-to-just-5-7-in-2022-unctad/2699713/).

Moreover, given the country’s past track record, GDP growth has been woeful year after year. One year could be an accident. Another year could be a coincidence. But when six consecutive years show a dampened GDP growth, the cheerleaders who try to talk up the markets need to be taken with a pinch of salt.

Yet you find a much tweeted and WhatsApp-ed discussion with Salvatore Babones (at the Indian Today Conclave in Mumbai) who claims that India’s critics have ‘Cherry-Picked' data to demonise the country (https://www.youtube.com/watch?v=7RfezC_1Z0I) . It is sad that Babones and his conversationalist did not pick up information on

*India’s Unimpressive GDP and even per capita GDP growth rates when compared to Bangladesh (https://asiaconverge.com/2022/05/bangladesh-trounces-india/). .

*The highest unemployment rates among working age populations compared to all of India's neighbours (https://asiaconverge.com/2022/10/pli-and-the-indian-economy/).

* The corrosion of education (https://asiaconverge.com/2022/05/india-wont-prosper-till-education-and-employability-improve/).

*The concealment of data – even the statistical data from the country’s Economic Survey have vanished. Access to Lok Sabha and Rajya Sabha replies is no longer searchable on Google, and even the Census 2021 has been pushed back (Read the column by TN Ninan at https://wap.business-standard.com/article/opinion/data-goes-private-positive-for-india-but-also-a-challenge-for-the-govt-122110401404_1.html).

Obviously, such specious justifications do tremendous harm because they fail to tell policy makers of the things that desperately need to be done. 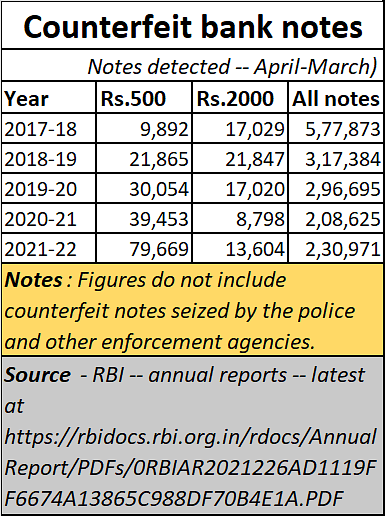 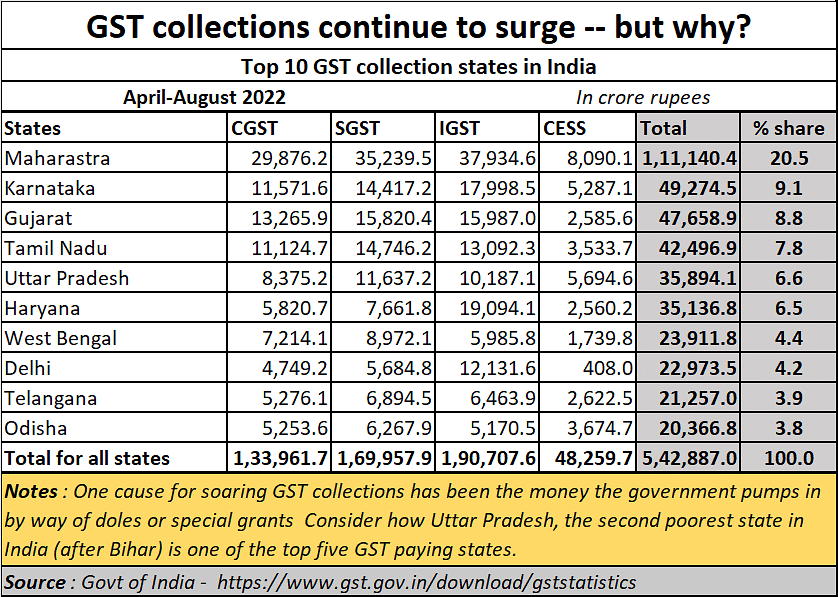 Similarly, listen to senior bankers who begin defending demonetisation by saying (https://www.livemint.com/news/india/india-a-changed-nation-post-demonetisation-kotak-ceo-11667965265763.html) that the positives of demonetisation includes growth of digital economy, tax revenues including GST, less cash transactions, etc. Yes, the digital economy grew. But so did cash transactions which are today higher than during pre-demonetisation times (https://www.rbi.org.in/Scripts/PublicationsView.aspx?id=19417). In fact, what is worrying is the surge in counterfeit notes. Stamping out fake currency was one of the key objectives of demonetisation (https://rbidocs.rbi.org.in/rdocs/AnnualReport/PDFs/0RBIAR2021226AD1119FF6674A13865C988DF70B4E1A.PDF).

Finally, let’s go back to GST numbers. Do study the numbers carefully. During the past five months, GST collections (including cess) stood at an all-time high of Rs.542,886.97 in just five months (https://www.gst.gov.in/download/gststatistics). Break up these collections state-wise and you will discover that the second poorest state in India, Uttar Pradesh – Bihar is the poorest (https://asiaconverge.com/2022/02/the-double-engine-growth-for-uttar-pradesh-must-not-spread-over-india/) -- accounted for the fifth largest GST collections among the states.

Surely, a state which is poor cannot account for high GST collections. Then the penny drops. GST is charged on money spent. The doles and grants given to Uttar Pradesh are huge. That money had to be spent by someone or the other somewhere. The recipient would, once again, spend the money on something else – something called velocity of money in economics. As money gets circulated, GST is charged at every stage. Two years ago, the average GST per rupee was around Rs.12%. It could be higher now.

In fact, it is this increasing propensity on the part of the centre and the states to shower doles and grants in order to win voter appeal (https://wap.business-standard.com/article/opinion/the-state-of-states-have-they-really-been-fiscally-profligate-122110801769_1.html). That in turn has caused the surge in GST. It is easy to push up GST, or GDP based on borrowed money or even doles. That eventually shows up as deficit or debt.

A soaring GST does not point to a vibrant economy, because the money has not been used for asset formation. On the contrary, India’s gross asset formation is till quite low. India’s inability to make the country an easy place to do business away has actually scared away foreign direct investment (https://asiaconverge.com/2022/07/major-financial-turbulence-ahead-inr-may-weaken-further/). The raids and seizures – often on people who have financed activities that opposition parties were also involved with – has frightened away wealth generators. As many as 35,000 high networth individuals (HNIs) have left India since 2015. And just last year saw 1.6 lakh Indians surrender their passports and opt for living in another country.

As a result, India’s inequality continues to be high (https://asiaconverge.com/2022/08/taxing-the-poor-and-making-them-poorer/) because without good education, healthcare and jobs, most people have been encouraged to live off doles and freebies. Had there been jobs, upward mobility would have been possible allowing for a reduction in inequality. But India’s gross fixed capital formation (GFCF) remains quite low (https://asiaconverge.com/2022/05/india-and-ease-of-doing-business/).

Add to this some other numbers. With the looming recessionary rends, and high unemployment, India has encouraged a consumption economy. Its savings rates are falling. At the same time, India’s average population is getting older, because of a declining birth rate on the one hand and a longer life span on the other. When you have an older population which is not allowed medical insurance, and which has seen its savings shrivel (thanks to inflation and expensive medicare), you have a crisis that is about to manifest itself.

India needs to create jobs, and it desperately needs to create schemes which take care of the old. Just offering doles and freebies (even the much vaunted PLI or production linked incentive is a dole to select players in select industries (https://asiaconverge.com/2022/10/pli-and-the-indian-economy/).

Unless India manages to increase incomes, which in turn requires a rapidly climbing GFCF, better education and health facilities, and schemes for saving for old age, its dreams of becoming a vibrant nation will remain a chimera. This is where people like Chetan Arya of Morgan Stanley, when writing in Financial Times, have not looked at all the numbers (https://www.ft.com/content/489cc92c-c950-47de-ad5f-586b9da33b70). To grow you need to make people wealthier, reduce poverty, reduce inequality, improve health services, and – most importantly – make the country an easier place to do business in.

This celebration of the sixth anniversary of demonetisation is misplaced (https://www.moneylife.in/article/6-years-later-the-adverse-impact-of-demonetisation-persists/68833.html). It should not have happened, at least not in the way it was introduced to invoke awe and fear. The country would have fared better with a gentler GST. And it needs a government to be mindful of not collecting more money from people till they have been able to earn more.

At this rate India runs the risk of becoming a poorer nation than before.