HomeAnalysisGermany tries to bounce back after Ukraine

Germany tries to bounce back after Ukraine

Germany, the EU powerhouse, is bleeding profusely. So are other EU nations. Could there be a way for Germany to pull the EU back from the brink of financial catastrophe?

The attempts of the US and NATO to use President Zelensky of Ukraine to needle Russia may be backfiring, big time.

For the first time, since February, there are protests in the US itself. Recently, former US President, Barak Obama, was heckled during his speech. The crowds demanded that the US end the Ukraine war.  It pointed out that it was the US which had removed an elected government in 2014, and had installed a puppet regime instead which eventually led to the Crimean war.

Persistent aggravation by the US and NATO --using Ukraine -- could propel the world into nuclear war, with few (if any) survivors.  The penchant that the US has, in effecting regime change with impunity, has been played out again and again.

That is now threatening to split the US itself. But across the oceans, a bigger war is now being planned.  This was a war against ruination that Germany suddenly found itself waging. It was desperately trying to liberate itself from the unhappy consequences unleashed by the Ukraine war. Germany had, for the past three decades, been the lynch pin on which the EU worked and thrived.

Its economic prowess has been amazing since the 1990s – after East and West Germany got unified. And there has been no looking back.

Even after 2014, Germany continued to enjoy a positive balance of trade.  But the 2022 crisis could change all that. It might slip into negative territory – not just for one year, but for several years unless it does something different. US as the spoiler

Before the 2014 Crimean crisis, which led to the US imposing  (unilaterally) sanctions on doing business with Russia, Germany was on the upswing.  Since Russia had helped catalyse the reunification of Germany in 1990, Germany found several opportunities for engaging in more trade with that country.

That was when  NATO decided to move towards Crimea, in violation of an earlier agreement. In 1990, the US promised Europe and Russia that NATO would not be allowed to move even an inch eastwards from the then existing positions.

When NATO declared that it would spread eastwards,  President Sarkozy of France and Chancellor Merkel of Germany objected.  But they were overruled.  The NATO move was the provocation for Russia to annex Crimea, which in turn led the US to retaliate with sanctions. 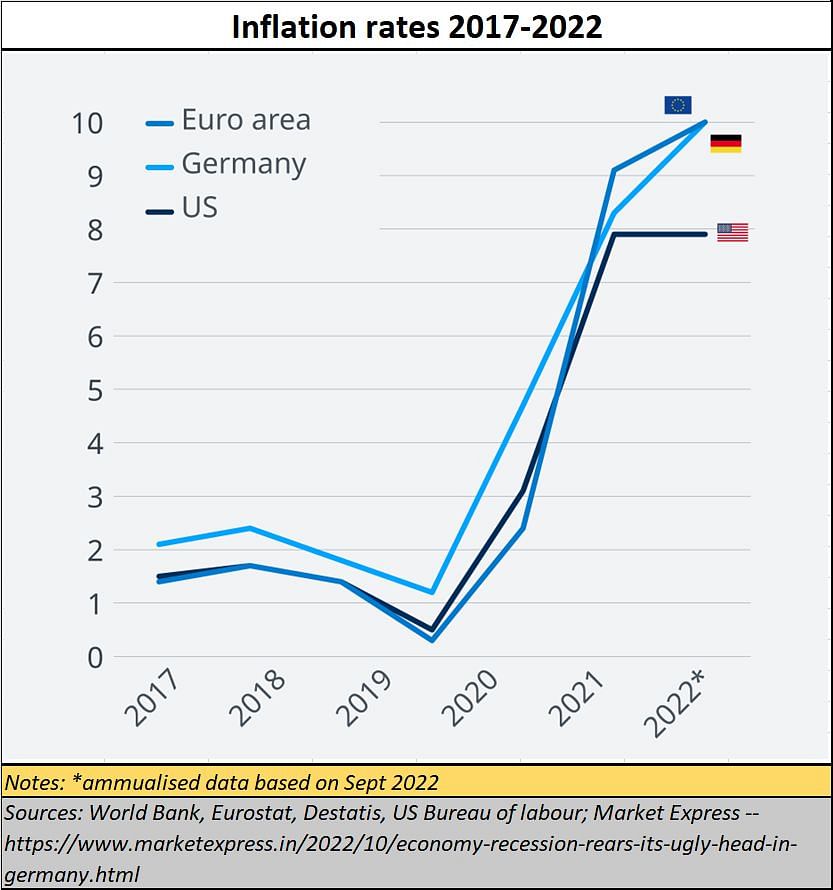 The first round of sanctions hurt Germany.  But it bore the pain in silence.  Then came February 2022, when – prodded by the US --  Ukraine tried to poke the bear in its eye.  The bear struck back, and the war against Ukraine began.

The US must have thought that the war would translate into more exports for its own gas producers, thus displacing Russian gas.  But the costs were too high. But the US benefitted from arms sales.  And it thought it could weaken Russia.

The US got Germany to cancel the Nordstream 2 deal. But Russia – instead of capitulating -- banned all energy exports to the EU, and instead focussed on selling its oil and gas to the East (including India).

Today, the pain that has been inflicted on Germany far outweighs that experienced by many other countries. As a result, its political leaders have had to face rising public anger, people now want Germany to even break away from NATO and end this senseless war against Ukraine.

Expect such protests to become more virulent, as winter bites into the bones of Germans, who are not likely to get adequate gas supplies at reasonable prices. There are indications that things may get terribly worse in Germany even after this year gets over, say studies by the Bundesbank.

The result was that while the US and all other European nations suffered, Russia actually emerged stronger, and found itself more capable of financing the war. While others faced recession, Russia was thriving.

In sharp contrast, Germany, the EU powerhouse, was bleeding profusely. So were other EU nations. Could there be a way for Germany to pull the EU back from the brink of financial catastrophe? Germany seems to have found a way out of this economic mess.  It has decided to join hands with China instead. Since China is not covered by NATO, any dealing between these two countries would fall outside of NATO ‘s jurisdiction.

It has already entered into partnerships with China in areas related to ports and semiconductors.  More such collaborations may be expected.

Many key politicians – who appear to be closely aligned with the US – have protested.  But Chancellor Scholtz (as quoted in the Financial Times issue of November 1, 2022) believes that Germany has no choice but to trade with countries such as China.

“You dance with whoever’s in the room — that applies to world politics just as much as the village disco,” he famously noted in 2018.

Moreover, Germany is not a stranger to China. FT points out how, BASF, for example, gave the final approval in July to a plan to build a massive new factory in the southern Chinese city of Zhanjiang that will cost €10bn. Meanwhile, it also plans to “permanently” downsize its presence in Europe, a region it says that high energy costs have made increasingly uncompetitive.

Siemens said last week it was planning a major expansion of its “digital industries” division in China.

Volkswagen sells 40 per cent of its cars in China. This country accounts for 13 per cent of Siemens’ revenues and 15 per cent of BASF’s. A recent survey by the Ifo think-tank found that 46 per cent of industrial firms rely on intermediate inputs from China. That is why Germany has opened up  new associations with China. This video explains why, “Recently after German Chancellor Scholz approved the Chinese purchase of a 25% stake in the Port of Hamburg German newspaper "Handelsblatt” reported - on October 27 - citing government sources, that the German government also plans to approve a Chinese acquisition of chip-production at Germany's Elmers Semiconductor Technology. The lead acquisition is Sweden's Silex Silex which is the world's leading MEMS sensor foundry companies. In the global MEMS pure foundry revenue ranking has been in the top five and the United States Teradyne-Dalsa, Japan’s Sony, China’s TSMC, Germany’s X-FAB and other manufacturers continue to compete.”

If this upsets the US, it does not seem to be stopping either China or Germany.  The latter has already suffered hugely on account of the needless provocative plans of the US (it calls the shots where NATO is concerned).

In much the same way as Germany, it will not be surprising to see all other Eurozone countries to begin falling the same way as in a game of nine-pins. They too will seek business opportunities away from the US and from NATO to survive economically.

Expect them to begin negotiations with China, Iran and even some African states.

Will USA get isolated?

What happens to the US now is anyone’s guess.  It will be furious with both China and Germany.  It may try to provoke a skirmish with China, using Taiwan in much the same way as it used Ukraine.  It is not likely that either China or Taiwan will fall for this gambit.  You cannot cry wolf too often.

The ban on semiconductor personnel and companies from doing business with China could actually cause the US companies to shrink in market size.  China already has fabs (fabrication units) which develop some of the most sophisticated chips for its military.  Expect these capacities to be expanded.  Also expect capacities to now get bolstered in association with Russia and Germany. The loser will be the US.

The US is already losing some of its grip on money markets and increasingly many countries opt to do business outside the dollar framework.  That could make the dollar less relevant, though it remains quite strong even today. Do remember that the US remains the biggest producer of arms, and that could be used to foment more trouble in the world.

In other words, expect a more turbulent 2023.  Unless there is a nuclear war, expect Germany China, Russia and (possibly) even India to emerge stronger from the Ukraine war and its consequences.  Already India has permitted the Chinese to resume investments in this country.  The hostile banter is gone from both sides.

Maybe, this part of the world could see more peace and progress.