From its efficiency to demand for greater say in politics and policymaking, changing global attitude towards democracy; analyses KC Singh

A Pew Research survey on the global attitude towards democracythrew up surprising findings. The four main insights were:democracy is not delivering; people favour it but their commitmentis weak; political and social fissures amplify challenges to it; and people want a greater say in politics and policymaking
K C Singh 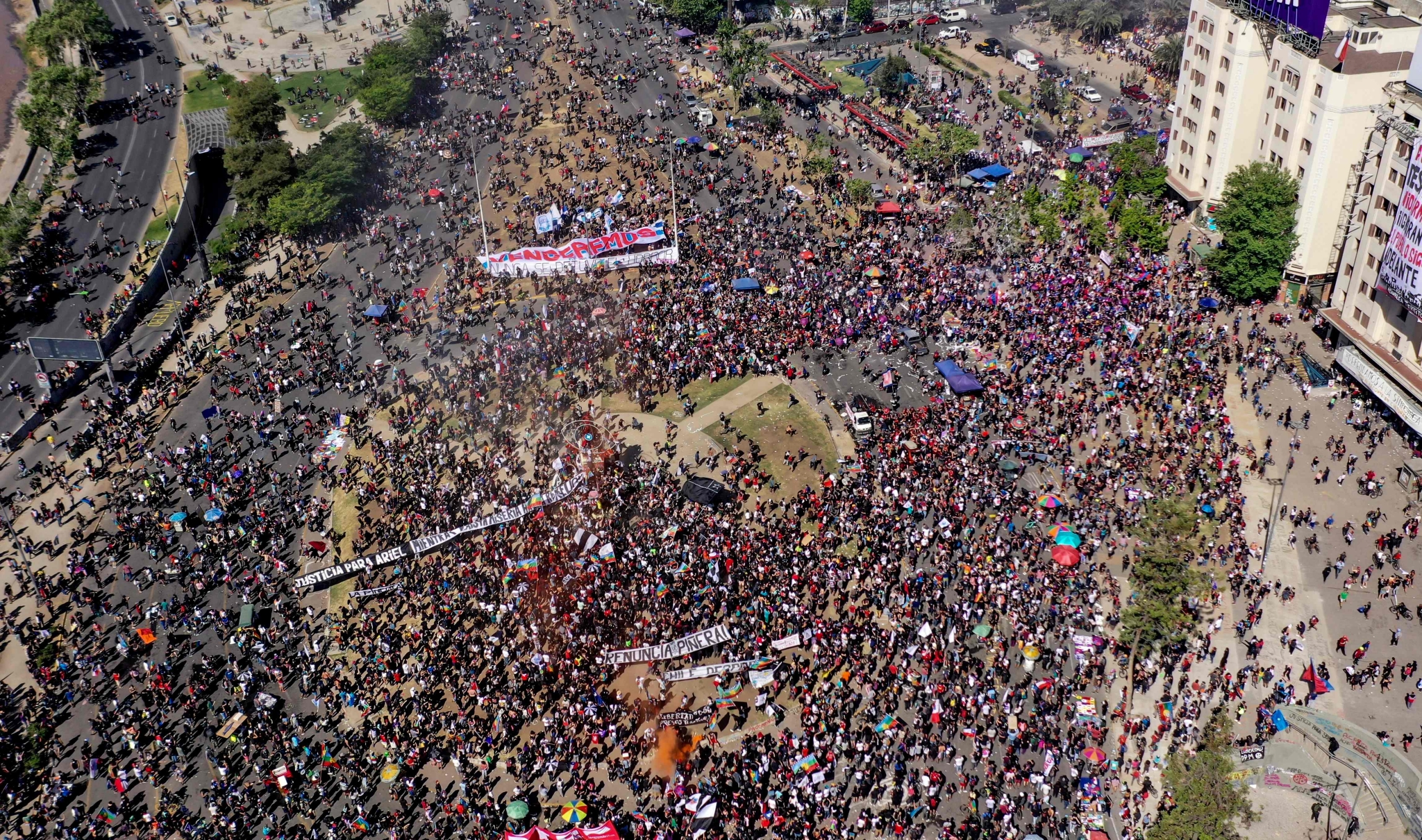 Aerial view of a demonstration with a banner reading ? We will overcome? on the commemoration of the first anniversary of the social uprising in Chile, in Santiago, on October 18, 2020. | (Photo by MARTIN BERNETTI / AFP)

The state of liberal democracy globally has been audited in the past week. US President Joe Biden convened a twoday summit of over 100 handpicked nations, on December 9-10,to rally supportfor it. Pew Research issued its survey on global attitude towards democracy on December 7.

The Pew survey findings are surprising. Its four main insights are: democracy is not delivering; people favour it but their commitment is weak; political and social fissures amplify challenges to it; and people want a greater say in politics and policymaking. A median number of 26 per cent prefer strong leaders, with 24 per cent even giving the thumbs up to military rule. Even worse, in India, Nigeria, Indonesia, South Africa and Vietnam, those preferring this touch 50 per cent. More than half even in 17 advanced economies want major change or reform in their political system. The root cause of this despondency is pessimism about the future

Against this backdrop it is understandable why President Biden is keeping his campaign promise to rally support amongst democracies of the world for rejuvenation and strengthening of democracy. The message is also reflected in the very choice of invitees. The exclusion of China and Russia is understandable, but others invited or omitted invite attention. From the Middle East or Gulf and West Asia, as India calls the region, only Iraq and Israel were invited. It underscores the failure of the 2011 Arab Spring to replace dictators with functioning democracies. From the European Union, only Hungary was excluded though the state of democracy is worrisome even in Poland. From South Asia,those included were India, the Maldives, Nepal and Pakistan. Eyebrows were raised over why Pakistan was in and Bangladesh out. The exclusion of Sri Lanka reflects concern over the Rajapaksa family’s stranglehold over democratic institutions.

The Brookings think tank took the World Justice Project (WJP)’s Rule of Law Index to rate the host and some invitees. The US itself is 27th out of 139. South Africa is 52nd, Brazil 77th and India 79th. If the elite group BRICS is taken, while Russia and China did not make the cut, the other three members also are not ranking high as custodians of rule of law. Thus, it was not surprising that President Biden pointed a figure at his own nation as much as others.

The insurrection in Washington last January as mobs invaded Capitol Hill underscored the fragility of democracy. President Biden, in his address, highlighted this saying democracy “requires constant effort” and its sustenance is an “ongoing struggle”. He correctly surmised that with the global democratic recession witnessed in this century keeping liberal democracy alive is a “defining challenge of our time”.

The three shortlisted themes for the Summit for Democracy are: combating corruption, countering authoritarianism and promoting respect for human rights. It is being mooted that for the next summit in coming year, expected to be an in-person gathering, invitees shall be listed after judging their performance on agreed objectives. A US presidential initiative has been launched, with a likely funding of $424.4 million, for Democracy Renewal. Amongst its aims is the support for independent media, the conduct of free elections,the elimination of corruption and democratic reform.

The agenda is ambitious, especially in the face of an economically and militarily rising China, broadcasting the virtues of its rival system of single party rule. The envoys of Russia and China in Washington penned a joint op-ed, dismissing the Summit for Democracy as “a product of cold war thinking”. With Taiwan invited, albeit at the ministerial level, an outraged China issued a white paper arguing the merits of ‘the China model of democracy’. China, it said, balances democracy and development and, unbelievably, has the ‘multi-party cooperation system in which the Communist Party of China exercises state power’.

President Biden’s democracy evangelism is both to check democratic regression globally and also to stymie China not just economically and militarily but also ideologically. But he will need to pragmatically balance US interests against principles. The US struggled with this dilemma during the Cold War, when a lot of slack was cut for all manner of authoritarian allies.

Even now, Pakistan or the Philippines will get away with a lot more domestic democratic relapses than Hungary or even NATO ally Turkey. A New York Times piece raises the US challenge over domestic divisive politics of leaders of Brazil and India.

But some positives are also visible. After almost two decades of a Chancellor Angela Merkel-run Germany which had one foot in Europe and the other in China and Russia, a new coalition has taken charge. The new alliance of Social Democrats (SPD), Green Party and Liberal Democrats (FDP) talks of a value-based foreign policy. Germany may start looking at China and Russia less transactionally.

The most powerful EU member could see reorientation of Europe’s approach to China, especially.

Prime Minister Narendra Modi has repealed the farm laws and even conceded other demands of agitating farmers. Whether this is a tactical retreat in the face of the electoral balance titling against the BJP in Uttar Pradesh or genuine moderation, the coming months will tell. But one element is clear. The time to revel in the club of democracies abroad and adopt authoritarian and divisive politics at home is over.