From a Hindustani state, we are becoming a Hindu state, writes Arun Sinha Prime Minister Narendra Modi’s open involvement in the construction, rebuilding and restoration of Hindu temples is a perilous thing for the Indian state or society.

There is nothing wrong with the construction, rebuilding or restoration of Hindu temples. These are iconic shrines that Hindus see as abodes of their highest deities and have a right to construct, rebuild or restore. But why should the Prime Minister get involved? Narendra Modi is a self-professed Hindu believer. Nobody would have raised any fingers if he were to be engaged with other Hindu believers to construct, rebuild or restore those temples as a person.

Much like other devotees, he would have worn saffron clothes and a tilak on his forehead and joined them at the foundation-laying or inauguration ceremonies in the performance of the rituals and nobody would have objected. Even if the media would have noticed, it would have been for his good and the good of the Indian state and society, for he would have been applauded for going to the ceremony as a common Hindu.

Nobody can take away Narendra Modi’s right to believe in, follow and practise the Hindu faith. Everyone in India is entitled to their faith. Where the problem arises is his participation in the projects and ceremonies in his official capacity as Prime Minister. He is completely ignoring the fact that as Prime Minister, he represents the Indian state. By his participation, he is making his personal faith the faith of the Indian state.

Surely, that is the RSS project and all those grandiose, intoxicatedly choreographed and widely broadcast ceremonies with him at the Centre are calculated and designed to demonstrate that Hinduism is the national religion of India.

The RSS and Modi seem to have decided that if they are restrained by various domestic and global factors to officially declare India as a ‘Hindu Rashtra’, they can at least unofficially proclaim it so. But in the process, they are causing serious damage to the Indian state and society. The ruler in India throughout history, be it Hindu, Buddhist, Jain, Sikh or Muslim—of course barring some exceptions—could not ignore the reality that their subjects followed different faiths and they could not impose their personal faith upon them.

That is why theocracy found no space in India, unlike Europe, where kings had to adopt extreme secularism to end the dominance of the extreme religionism of the Pope. Independent India’s concept of the relation between the state and religion was a continuity of the historical political tradition.

This concept stood on a firm tripod of principles: one, everyone would be free to follow their faith; two, the ruler would not impose his faith upon the people; and three, he would equally honour all faiths. Throughout history, kings gave grants of land and other support to their subjects of different faiths to set up their places of worship. Following that political tradition, the state in Independent India provided subsidies for Muslims gotoMeccafor Hajj, Hindus to participate in the Kumbh Mela and Sikhs to go to Pakistan for pilgrimage. There was equal respect and honour for all faiths.

The state treated them impartially. All that is changing with Modi in the Prime Minister’s office. Under him, the state has become partial to the Hindu religion. Had he been as personally involved in building, rebuilding and restoring the holy places of other faiths too, the world could have still said the Indian state was following the old tradition of equal respect for all faiths. But he is doing it only for the Hindu faith. Under him, the state is using public money for the promotion, preservation and maintenance of only one faith.

The money in the public treasury comes from followers of all faiths. But it is being used for building and rebuilding only holy places of Hinduism. Modi’s efforts to shower special privileges on Hinduism and accord it a unique status is a reversal of India’s historical tradition of equal respect to all faiths. India under him might not be looking like what Iran became after the Islamic Revolution of 1979, but it is certainly showing some likeness to the Iraq of Saddam Hussein who, while his state remained secular on paper, started a ‘Return to the Faith’ campaign to promote Islam as the preferred religion in public life and the life of the Iraqis. The similarity is seen not only in how Modi is restoring Hindu holy places but also in how he is propagating Hinduism.

He takes pride in saying that his idea behind the restoration of great Hindu holy places and the development of infrastructure around them is to get more and more people to visit them. Addressing the crowd at Kedarnath in early November last year he asked the older people to bring the younger generations to the Hindu ‘tirth sthals’ (holy places) in order to acquaint them with ‘our history, culture and tradition’.

Modi’s partiality to Hinduism is clear proof of the pseudo-secularism of the RSS. In theory, the RSS stands for a state that respects all religions and has no religion of its own. In the words of the RSS chief ideologue M S Golwalkar, there has always been “scope and to opportunity in India for every religious persuasion to grow”.

The king, he says, respected and encouraged “every single religious thought, however few its adherents, to grow according to its genius”. The king was the pillar of support and protection for all faiths. To the king, followers of all faiths were equal in the eyes of the state. Golwalkar’s clinching line is: “Never did the king prostitute the state apparatus to impose his personal religious dogmas.” But that's the secularism the RSS preaches.

The secularism it practises is just the opposite of it. What we are seeing is the state’s open partiality to one faith. The king is openly prostituting the state apparatus to impose his personal religious dogmas. The king is not a pillar of protection for all faiths but the promoter and propagator of one faith. Modi’s partiality to Hinduism is changing the character and image of the Indian state from multi-religious to mono-religious in the eyes of Indians and people abroad. From a Hindustani state, we are becoming a Hindu state.

And that shift has unleashed venomous dragons that are attacking followers of other faiths in every nook and corner of the country.

(A journalist and writer, Arun Sinha has done pioneering work in investigative journalism, beginning with his exposé on the Bhagalpur blindings.) 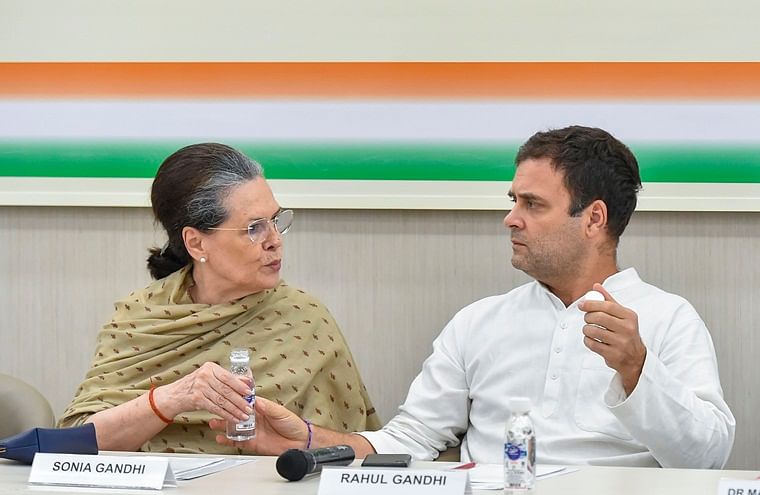 FPJ Edit: The polls and the sad state of Congress