FPJ Edit: ‘Samvidhan Samman Divas‘ - President Kovind rightly said that our development has progressed on the strength of our Constitution 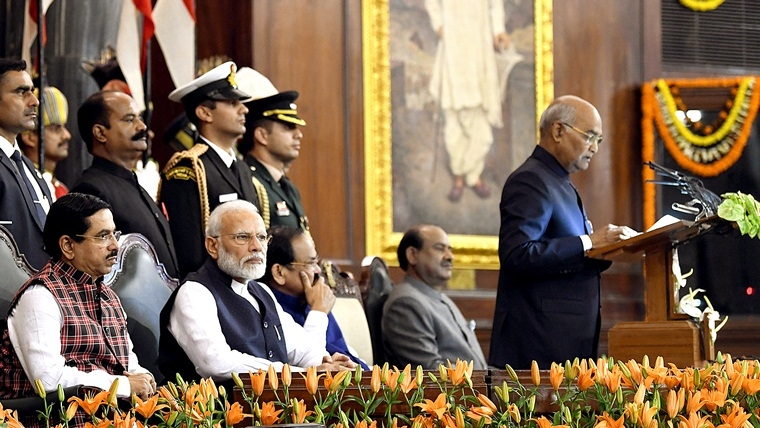 It is a sign of the times that a day to commemorate a document as superb and as sacred as the Constitution of India was used to settle petty political scores. While 15 opposition parties boycotted the programme organised by the Lok Sabha to celebrate the Samvidhan Samman Divas, saying that the Constitution was being undermined, the PM used the occasion to lambast the Congress party and blame others for his government’s failings.

Having failed to counter the BJP in the hinterland as well as in the House, it was cynical and self-defeating of the opposition parties to boycott the celebration; the show of unity should have come during elections and in parliamentary debates. As for the PM, he could have done well to show some restraint, given the occasion. Voters have given him a huge mandate for change and expect him to be magnanimous.

After all, the Constitution is the bible for democracy in India; it delineates the fundamental political code, structure, procedures, powers and duties of government institutions and sets out fundamental rights, directive principles and the duties of citizens. Our founding fathers overcame great hurdles to draft the document which took three years.

Addressing the Constitution Day event in the Central Hall of Parliament, President Ram Nath Kovind struck the right note when he said that the development journey of India has been progressing on the strength of our Constitution. Speaker Om Birla likened it to the modern version of the Bhagavad Gita that motivates every Indian to work for the nation.

The PM however struck a discordant note when he launched a tirade against the opposition parties and the Congress; he could as well have been speaking in an election rally rather than addressing the august assembly in the 75th year of Indian Independence. Mocking the opposition, he said that politics had compromised the value of “nation-first” to such an extent that it was doubtful if the present lot of leaders would be able to draft “even one page of the Constitution” by setting aside differences. That’s rich, coming from someone who just had to repeal the three farm laws, hurriedly drafted and rammed through without any discussion.

Targeting family-run parties, the PM questioned how they could protect democracy when they had lost their democratic character. He said this was against the spirit of the Constitution. Now, this was an occasion for the PM to be statesmanlike, not to get on his high horse. By doing so, he not only belittled the occasion but also left himself open to contradictions. Where is the spirit of the Constitution, one may ask, when parliamentary democracy is being undermined and insulted with the enactment of laws bypassing scrutiny?

The irony was not lost on anyone when Chief Justice of India N V Ramana pleaded with the PM to protect the judiciary from the rising physical attacks on judges and assaults on the judiciary, particularly in the social media, which appear to be ‘sponsored and synchronised’. Significantly, the CJI also warned against any attempts to project judicial interventions as targeting of the executive and said that it was “totally misplaced” and would prove detrimental to the health of democracy if encouraged.

The CJI’s plea to the PM to not be so thin-skinned went in vain as the PM went on to blame the ‘colonial mindset’ for derailing India’s growth story. “Various pressures are created on India in the name of environment,” he said. “All this is the result of a colonial mentality… But the misfortune is that even in our own country, going by this colonial mindset, obstacles are created in the path of our own development, sometimes in the name of freedom of expression and sometimes by taking resort to something else.” It is the familiar ‘andolan jeevi’ spiel. There may be some substance in the PM’s complaint about the double standards of Western countries but who will take him seriously if he sees a conspiracy in a missive by Greta Thunberg to a 22-year-old environmental activist in India?

As for the colonial mindset, his government is at the forefront of abusing colonial era laws such as sedition. Even an 84-year-old priest can be left to die in a dungeon on the palpably false charge of waging war against the nation. Speaking on the occasion of Constitution Day in Mumbai, Justice Gautam Patel of the Bombay high court said that the first self-preservation strategy of nervous political parties was one of criminalising dissent and disagreement altogether. The second approach, he said, was one where ordinary laws, such as taxation laws, were weaponised and used to muzzle disagreement, dissent and to ensure that contrary voices remain unheard.

The Indian Constitution has endured for 72 years because those who drafted it were able to conceive of a document that would speak for the marginalised, the dispossessed and the oppressed. Its survival should not be taken for granted; France had had 14 constitutions, Mexico, five and neighbouring Pakistan, three. Apart from its robust drafting, India’s Constitution has lasted so long because its interpreters, the constitutional courts, and litigants in the form of social movements have collectively ensured that it is used to consistently expand the freedoms of citizens. We need to respect the Constitution; it binds us as a nation.