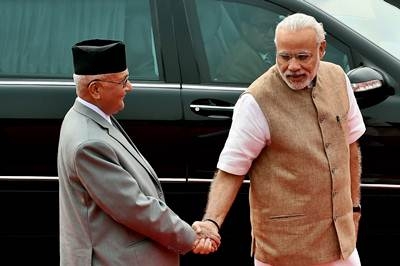 Clearly egged on by China, the Nepalese Communist government is acting too big for its boots. Recently, Nepal’s House of Representative unanimously approved the tabling of an amendment to the country’s constitution which will formally show nearly 400 sq km of Indian territory extending west from the Lipulekh Pass, and including it, as part of Nepal’s sovereign territory. But Nepal’s brinkmanship has made it tough for the two sides to arrive at a mutually acceptable diplomatic solution. The sudden aggressiveness in Nepalese stand could hardly have come about without active Chinese mischief to pinprick India and rake up a controversy which was not reflected in long-time Nepalese official position. The Chinese on their part while maintaining an ominous silence on this are clearly pushing the Nepalese to take such a stance. They are also laying claim to the Himalayas which have always been deemed to be in Nepalese territory.

Nepal Prime Minister K.P. Sharma Oli took New Delhi by surprise recently over the opening this month of a motorable road to the Lipulekh pass, near the disputed Kalapani area, which is used by Indian pilgrims to Kailash Mansarovar. For India, the Lipulekh pass has always been part of the road to Tibet, and was mentioned as one of the border passes for trade in a 1954 agreement with China, which was also reaffirmed in another trade agreement in 2015. India must open a dialogue with Nepal to nip the developing crisis in the bud with firmness and resoluteness. The Chinese diabolical game must be defeated at all costs.