FPJ Edit: A speech that failed to live up to the occasion 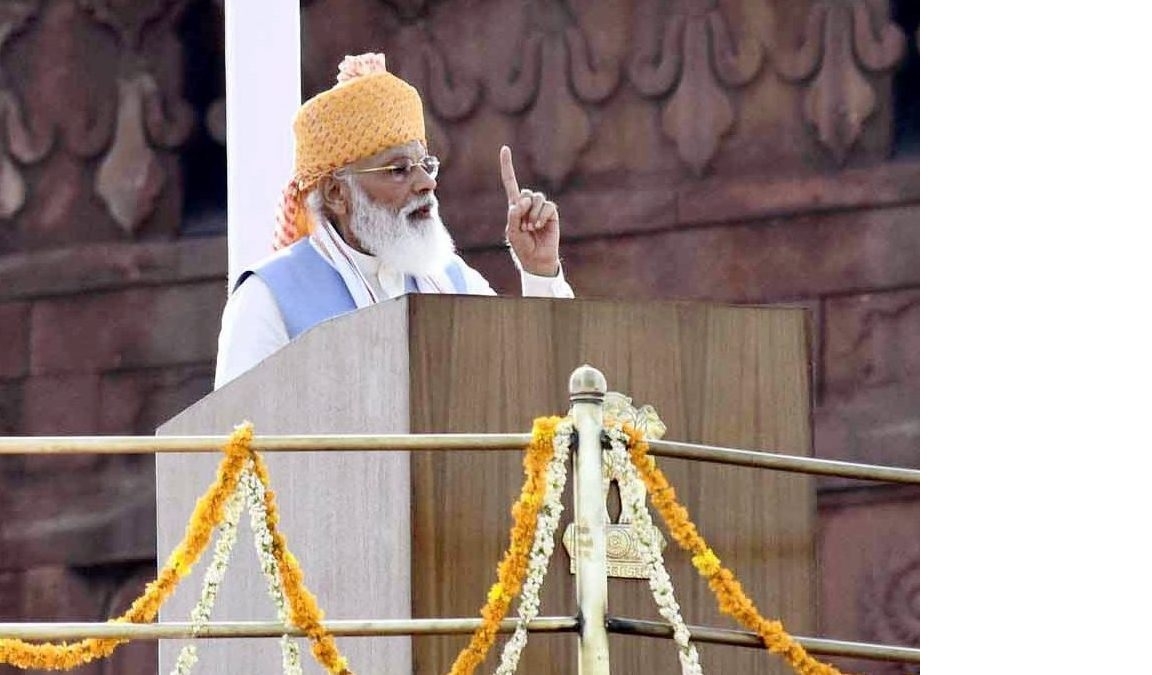 Given that it was India’s 75th Independence Day and the PM’s skills as an orator, his speech from the Red Fort on Sunday came as an anti-climax. One thought he would touch Olympian heights but he fell way short of his own best performance, which was at the recent West Bengal polls. The zing and zest that he brought to his head-to-head fight with the feisty Mamata Banerjee was missing. Like a heavyweight boxer past his prime, Narendra Modi huffed and puffed his way through his 90-minute speech.

There was no big idea, no big message, no new vision; just a string of tired, old clichés. The word ‘sankalp’ (resolution) was used as a crutch, at least 100 times in his marathon speech. There comes a time in the development journey of every country, he said, when the country redefines itself afresh and pushes forward with new resolutions. And he was charitable enough to give credit to the country’s first PM, Jawaharlal Nehru. If only the PM had spent half this time and displayed half this spirit in Parliament.

Indians still believe in Modi but they are getting tired of his spiel and his chest-thumping; they would appreciate some plainspeak from him. Instead of the Rs 100 lakh crore Gati Shakti scheme, they would prefer to hear about the baby steps his government is taking towards economic recovery. After all, it is grandiose schemes such as demonetisation, the hastily-implemented GST, the rammed-through farm bills and the empty boast on vaccines that have landed us in such a mess.

No one is impressed by the PM’s statement that more than 54 crore people have been vaccinated when it accounts for only 12 per cent of the population. And pray what happened to the Rs 1.70 lakh crore corona relief package? Why talk of a $5 trillion economy by 2025 when the GDP has plunged below zero. The nation wants an audit of past schemes but it is handed another audacious scheme with staggering figures. For God’s sake, there is a difference between an election speech and an address to the nation on its 75th Independence Day.

People don’t want the promised Rs 15 lakh in their bank accounts, they just want banks to recover swindled public money from all the crony capitalists. They don’t want pious statements on Ram Rajya, they just want the government to come clean on electoral funding. Why is it, voters want to know, that they have to account for each paisa they have while political parties don’t. After all, this is the Gangotri of corruption. Forget Make in India, Skill India, Start-Up India, Stand Up India…, Modi needs to emulate Deng Xiaoping, who famously said that he did not care about the colour of the cat as long as it caught mice.

The PM may paint a rosy picture of the economy but the 25 million people have lost their jobs since the start of 2021 and the 75 million Indians who have plunged back into poverty will not buy it. Even non-committal Indian capitalists are beginning to say that Modi has ‘flattened the wrong curve’; that of the economy, instead of Covid. The commerce minister has now lashed out at the Tatas and more broadly said local businesses should not just focus on profits or think of bypassing local laws. The common man would only like to know why global capital deserting China prefers Vietnam over India. Has it anything to do with us managing our monetary policy like Mohammed bin Tughlaq?

The PM said the government should not interfere unnecessarily in the lives of citizens. This is really rich coming in the backdrop of the sensational Pegasus snooping allegations which his government neither confirms nor denies. He reiterated his promise of ‘sabka saath, sabka vikas’ and urged for ‘sabka prayas’ a week after a former spokesperson of his party and a Supreme Court lawyer openly gave a hate speech at Jantar Mantar. Modi is behaving like an autocrat but there was not a word allaying the fears raised by civil society about the seven early signs of Fascism evident in India: nationalism searing into the national fabric, disdain for human rights in government, subjugation and control of mass media, obsession with national security, religion and government intertwined in the country, disdain for intellectuals and the arts and erosion of independence in the electoral system. These, like migrating workers and shortage of oxygen, are just figments of the imagination. How can one urge the country to redefine itself afresh and push forward with new resolutions unless this is a call to his followers to deal with the pesky people who demand ‘too much democracy’.

Modi’s effort to bring the benefits of development to the underprivileged is commendable. So is his endeavour to develop the backward districts of the country. Digitisation of land records, opening up Sainik schools for girls, fortifying rice meant for the poor and for mid-day meal schemes is laudable but we are a country where rampant corruption means mid-day meals for school children are often not suitable even for cattle, where journalists who expose such corruption are arrested under draconian laws.

Unless the PM accepts the ground reality, sets realistic targets, does an honest audit of his government’s schemes, his speeches, however long, will fail to enthuse the masses.