Extended joblessness is a growing concern among the youth of India, writes Harini Calamur

The Modi govt, during its third term, is going to face a massive anti-incumbency problem; the core issue for the 2024 elections is likely to be around employment. While it is up to the opposition if they can capitalise on the sense of fear of extended joblessness amongst the youth, the bigger challenge is for the Modi government to be seen to be doing something about the employment problem.

Extended joblessness is a growing concern among the youth of India, writes Harini Calamur |

Last week, the government announced two major initiatives. The first was to create 10 lakh (1 million) jobs in the government to absorb youth. The second was the Agnipath scheme aimed at creating a younger, more tech-savvy fighting force. Both schemes reflect the government’s growing concern over two very key aspects – the level of urban male unemployment, and the inability of the private sector to create jobs (not gigs) for large numbers of young men and women coming out of the education system every year.

According to the government’s own data, published as the Periodic Labour Force Survey (PLFS), educated youth unemployment is worrying. The labour force participation rate during January to March 2022 was 38.2% compared to 38.4% in the same period last year. Even if you excluded women participation (a measly 17.3%) and only looked at the men entering the workforce, that number stood at 57% - meaning that 43% of young men had no regular income. 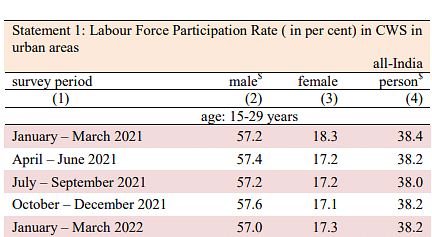 The last decade has seen a drastic reduction in the ability of the non-agricultural sector – construction, industry, MSME – to absorb school and college leavers. The Indian economy has seen a massive disruption in the last decade or so, starting with demonetisation, followed by GST, and then by the pandemic and severe lockdowns. The greatest distress has been in the MSME sector, and that has seen a knock-on effect on employment. Margins are squeezed, as are wages. Jobs are tenuous, and the gig economy can only accommodate so many.

The Narendra Modi government, looking for its third term in office, is going to face a massive anti-incumbency problem. And the core issue for the 2024 elections is likely to be around employment. While it is up to the opposition if they can capitalise on the sense of fear of extended joblessness amongst the youth, the bigger challenge is for the Modi government to be seen to do something about the employment problem. An increasing income divide is apparent – as is the restiveness amongst the youth. Ultimately, unless India can offer the hope of a better tomorrow for people and their families, at an individual level, there will be chaos.

But the perils of excessive hiring by the state is a mounting wage bill, benefits bill, and pensions bill. And what is odd is that while the government looked at increasing government jobs – and therefore the wage and pensions bills – for the centre and states through its 1 million government jobs instruction; it looked at just the opposite for the armed forces. Agnipath looks at a tour of duty concept, where youth sign up for a four-year contract. At the end of the contract, only 25% will be absorbed into permanent jobs – and the remaining 75% will be given a lump sum of around Rs 12 lakhs to make their way in life. It is hoped that this scheme would not just save the armed forces huge pension bills, but also allow it to have a younger fighting force.

While the first scheme has been received with relative silence, except for some voices asking how you would prepare these 1 million for careers, and where they will be absorbed, the Agnipath scheme has been met with agitation and violence. We have all seen images of trains being burnt across the country, and young men protesting with anger and stones.

What has been stunning has been the government’s unpreparedness in terms of the response from the youth. In a country where a government job is aspirational, you have just told a whole bunch of army aspirants that their hope of a permanent job is subject to a lottery for four years hence. Where one in every four young jawans will be absorbed into the army, and the rest – despite a golden handshake – would be left to the mercy of the job market. How could advisors and policymakers be so removed from citizens, their hopes, fears and aspirations, to not know how people will react?

Since the Agnipath scheme was announced – and the protests began – there have been at least half a dozen amendments to it. These include relaxing the upper age limit, 10% reservation in state police and Central armed police forces, 10% reservation in MoD, and other benefits. It is astounding that the government did not, on a policy document that was under discussion for at least 2 years, have a more systematic communication programme – informing youngsters and other key stakeholders of the benefits of this. Be it the farm laws or the Agnipath plan, the government has not just been unable to get key stakeholder backing for key reforms, it has managed to rile the very community that it claims it wants to help.

There is a problem with living in an echo chamber. You believe that the world thinks just like you, and therefore the need for building consensus is unnecessary. Unfortunately, keeping stakeholders on board is vital. Often at a policy level all the major institutionalised stakeholders are consulted – military experts, universities, think tanks, - but the stakeholder community most impacted is left out. Unless the government builds confidence amongst youth who are desperate for a job, that this scheme will give them a better future, it is going to be an uphill struggle. And that should have been done before announcing the scheme.

(The writer works at the intersection of digital content, technology, and audiences. She is a writer, columnist, visiting faculty, and filmmaker. She tweets at @calamur)

HomeAnalysisExtended joblessness is a growing concern among the youth of India, writes Harini Calamur