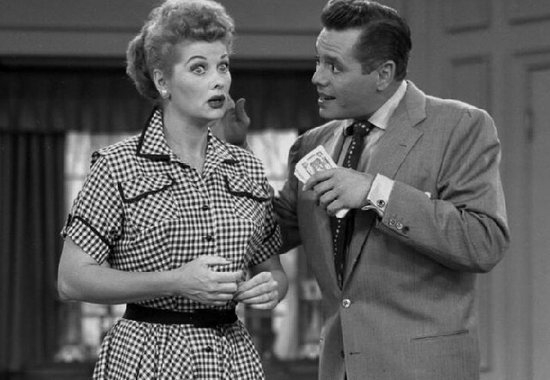 Seventy years ago, in October 1951, the first episode of a television show was broadcast, that changed the way TV comedy was written, produced, shot and consumed. I Love Lucy, which ran for six seasons, remains a landmark sitcom, and Lucille Ball (1911-1989), a real legend. It was just the beginning of a series of shows in which the lovely redhead played a different Lucy and managed the zany comedy so effortlessly. (Indian viewers who are of the age to remember the early days of Doordarshan would recall Here’s Lucy, in which she drove her boss, played by the wonderful Gale Gordon, to exasperation with her antics.)

I Love Lucy was not just the most watched show in the US, it was syndicated and seen in about 80 countries, dubbed in 22 languages. Even today, the colourised reruns do remarkably well. The number of awards, nominations and honours it has won are countless. In 2012, it was voted the Best TV Show of All Time in a poll conducted by ABC News People Magazine.

In I Love Lucy, Lucille Ball played a character called Lucy Ricardo, with her real-life husband Desi Arnaz, playing a Cuban bandleader named Ricky Ricardo. Their marriage had raised eyebrows at a time when mixed race couples were not easily accepted by society and ‘inclusivity,’ that is such a buzzword today, was nowhere in the picture. She had met Desi, who was of Cuban descent in 1940, while shooting for the film Too Many Girls, and eloped to marry.

According to piece by Natalie Finn in eonline.com, “The risk-averse network feared viewers weren’t ready for a mixed-ethnicity couple in prime time, so the couple took their chemistry on tour to prove they’d be a hit, Arnaz singing and Ball joining him for comedic sketches, many of which made it into the series. Within six months of the show’s premiere, more than 11 million households were tuning in each week, back when only about 15 million owned TV sets. I Love Lucy has never been off the dial since…”

Lucille Ball’s movie career had not been such a success—she acted in a lot of B movies, did a lot of bit roles, but her genius for clowning and physical comedy found no outlet in the films of the era, when as a top studio executive commented, “Funny women don’t sell tickets, pretty women do.” By the time she hit her thirties and was probably stagnating, she got the offer to do a radio comedy about a ditzy housewife, with Richard Denning. My Favourite Husband was such a hit that the network planned to turn it into a TV series. By this time, Ball had enough clout to insist on Desi Arnaz being cast opposite her.

It was early days of the television medium, and I Love Lucy caught the attention of audiences and became a trendsetter. Ed Martin commented in mediavillage.com, “When I think about the fact that I Love Lucy came and went between 1951-57 my head spins. It was so perfectly of its time, and yet, has somehow continued to feel current through every decade since. Lucy is a happily married wife and mother who nevertheless wants to do more and seeks fulfillment in a number of ways, often with comic results, but frequently with touching outcomes. And she always has her best gal pal by her side. Consider the relationship between Lucy Ricardo and her best friend and neighbour Ethel Mertz (Vivian Vance); two women who stuck together through thick or thin, regardless of what was going on in either of the marriages at the time.”

The situations she dealt with on the show as a scatter-brained housewife with showbiz ambitions, ranged from ordinary to outrageous; the humour came from the lines, her inimitable expressions and perfect delivery. It’s hard to believe that what looks like ad-libbing to the audience was actually carefully rehearsed, back at a time when such luxury of time was possible. The writers came up with the scenes and gags, but it was Lucille Ball who added her own unique energy to them; the other actors could barely hold on to their hats when the Lucy storm blew in. She never shied away from looking weird or ridiculous on screen; a woman as beautiful as her had not a shred of vanity when it came to her performance.

Credit for a big part of the success of the character and I Love Lucy could be given to Madelyn Pugh, who Martin describes as “perhaps the first female head writer on a television series, and at the very least the most successful in the medium’s early years. She had a hand in writing 39 episodes of I Love Lucy per season for the show’s six-year run. She worked with four men, not all of whom remained with the show throughout its entirety. Her inclusion was historic, her body of work extraordinary. She was as much a pioneer in her own right as the woman for whom she worked, yet she is rarely acknowledged today. She continued writing for Lucille Ball in her many series that followed, as well as movies that Ball and Arnaz starred in and many other television properties.”

I Love Lucy was revolutionary in other ways—it was shot with three cameras using 35 mm film, which was unheard of at the time, and gave the black-and-white show that sharp and crystal-clear quality. The channel, CBS, did not want to spend that kind of money, so both stars took salary cuts, Arnaz and Ball’s Desilu Productions covered the costs and, as a result, ended up owning the very lucrative franchise. It was also shot in front of a live studio audience, so the laughter heard was real, not canned. Lucille Ball went on to become the first woman to head an entertainment production company and, later, the first female studio chief of Desilu, when after their divorce, she bought over Arnaz’s share. As studio head, she produced great shows like Star Trek and Mission Impossible, proving to be as astute a creative force as she was an actress.

I Love Lucy was so popular that a line of merchandise hit the shelves too -- dolls, jewellery, clothing, knickknacks, and a comic book series. The nutty redhead and other members of the team have written, or have been subjects of, several books and documentaries, and a collectible DVD set.

When Ball and Arnaz divorced after nearly 20 years of a stormy marriage, mainly due to his alcoholism and infidelity, she was written off—how could a woman go it alone? But she did, with series like The Lucy Show, Here’s Lucy, and her kids Lucie and Desi Jr starred with her. Interestingly, she was pregnant with Desi Jr when I Love Lucy was on, and at a time when strict rules did not even allow the word ‘pregnant’ to be uttered on television, she gave birth to Desi on the same day as her character delivered little Ricky Ricardo. The news of Lucy’s son trumped the then president’s inauguration ceremony!

At the age of 75, she attempted to recreate the Lucy magic playing a grandmother in the show Life With Lucy, which, unfortunately, folded up after eight episodes; perhaps the end of the age of innocence and the fall of the traditional American family caused this crash.

Lucy Ricardo has never been forgotten. A new feature film, Being The Ricardos is due to be released in December, written and directed by Aaron Sorkin, starring Nicole Kidman and Javier Bardem as Lucy and Desi. Ron Howard is producing a definitive documentary directed by Amy Poehler.

In one of the episodes, Ricky Ricardo tells his landlord and buddy Fred (played by William Frawley) that his wife has been acting a little crazy. And Fred says, “Lucy crazy or normal people crazy?” That just about sums up the enduring appeal of Lucy!