It can’t be emphasised forcefully enough that the bloodshed in north-east Delhi cannot by itself be taken as invalidating the CAA.
Sunanda K Datta-Ray 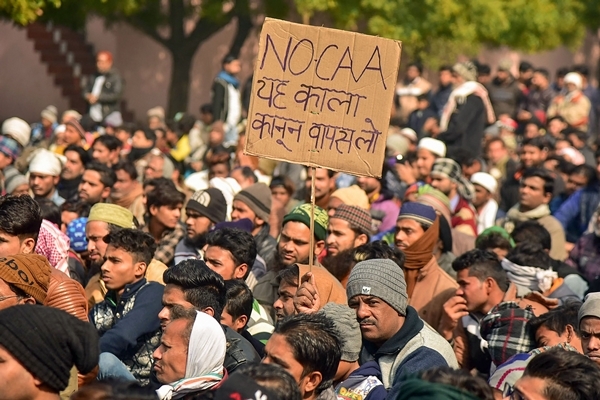 We live in a world of contrasts. The European Union’s expression of “deep regret” over the adoption and implementation of the Citizenship Amendment Act, of the Citizenship Act of 1955, which it calls “discriminatory [and] dangerously divisive” and which “may potentially create the largest statelessness crisis in the world and cause widespread human suffering” ignores the plight of Hindus who were stranded in the two wings of Pakistan when India was divided on religious lines.

It can’t be emphasised forcefully enough that the bloodshed in north-east Delhi cannot by itself be taken as invalidating the CAA. It was caused by supporters of the new law who would not brook the admittedly misguided opposition of those who fear that the CAA will deprive them of their rights.

It’s a measure of the government’s neglect of minority sensibilities that such an absurd view should have been allowed to gain ground, with the usual saffron-draped toughs chanting “Bharat Mata ki jai!” and “Vande Mataram!” sent out to ram the official point of view down people’s throats instead of patient explanation. 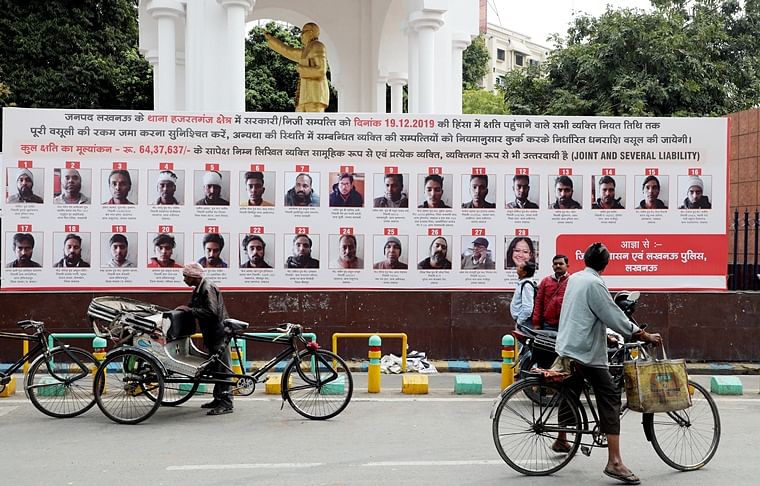 To name and shame anti-CAA protesters, Yogi govt puts up banners with photos and addresses in...

This is because although the CAA is a commendable and long overdue enactment, its purpose may have been less to render belated justice to victims of communal pressure in neighbouring countries than to impress voters with a politically-inspired display of the Bharatiya Janata Party’s Hindutva commitment.

In the outcome, the razzmatazz of Donald Trump’s visit was overshadowed by murderous rioting that engulfed a part of the capital and the death toll rose to 46.

President Trump’s lavish praise of Narendra Modi’s “democratic” and “tolerant” leadership was reported without irony next to stories about the Prime Minister’s implicit condonation of Kapil Mishra’s incendiary rhetoric and the devastation that followed.

The firebrand Mr Mishra also illustrates that contradictions can co-exist in the same person: Arvind Kejriwal’s former water resource minister saw no impropriety in playing footsy with the Bharatiya Janata Party until Mr Kejriwal removed him over allegations of corruption in his ministry so that saffron stalwarts like Manoj Tiwari, Vijay Goel, Vijender Gupta, Satish Upadhyay and others could baptize him into their ranks in a blaze of publicity. It wouldn’t occur to any of them to accuse him of the deceit of double-dealing. That’s par for the course.

And so Mr Kejriwal’s own ambivalence on the burning question of the day evokes little comment. The Aam Aadmi Party doesn’t have ideological, regional or community roots like the Marxists, the Trinamool Congress, Shiv Sena, Bahujan Samaj Party or the Rashtriya Janata Dal. It swept into fame on an anti-corruption plank and has since made capital of caring.

But as the criminal inaction of the Delhi police demonstrated during the riots, caring isn’t enough. Caring needs political backing. The Delhi police reports to the Union Home Minister, not to any authority in the National Capital Region.

In the same vein, the resolution that the EU adopted regrets that “in an effort to enable irregular migrants to acquire Indian citizenship through naturalisation and registration” the CAA restricts “eligibility to only Hindus, Sikhs, Buddhists, Jains, Parsis and Christians from Afghanistan, Bangladesh and Pakistan who entered India on or before 31 December 2014.”

This is said to be “explicitly discriminatory in nature as it specifically excludes Muslims from having access to the same provisions as other religious groups.”

No invitation can ever be universal. Even before President Trump, despite its virtually boundless resources, the US imposed severe restrictions on the Statue of Liberty’s inspiring dedication,

“Give me your tired, your poor,Your huddled masses yearning to be free, The wretched refuse of your teeming shore Send these, the homeless, tempest tossed to me.

I left my lap beside the golden door.” Doubts were expressed even at the time of inauguration. Shortly after the dedication, The Cleveland Gazette, an African American newspaper, suggested that the statue's torch not be lit until the US became "in reality" a free nation. "Liberty enlightening the world, indeed! The expression makes us sick,” the paper wrote. “This government is a howling farce.

It cannot or rather does not protect its citizens within its own borders.” The paper claimed it was not “possible for an inoffensive and industrious coloured man to earn a respectable living for himself and family, without being ku-kluxed, perhaps murdered, his daughter and wife outraged, and his property destroyed.”

The EU cites the Indian government’s justification for fast-tracked citizenship that the countries listed all have Muslim majorities where minority religions are more likely to face persecution in their home countries. It could have said that this is no reason for including Afghanistan which was never part of British India and where New Delhi has no historical, political, legal or administrative responsibility.

Instead, the resolution says that although India shares a border with Bangladesh, Bhutan, Burma, Nepal, Pakistan and Sri Lanka, the CAA does not bring under its purview Sri Lankan Tamils “who form the largest refugee group in India and who have been resident in the country for over thirty years.” That India has given them refuge for “over thirty years” is in itself commendable and indicates they will never be turned out.

The exclusion of Rohingya Muslims from Myanmar, who have been described by Amnesty International and the United Nations as the world’s most persecuted minority is criticised. India is taken to task for ignoring the plight of Ahmadis in Pakistan, of the so-called Bihari Muslims in Bangladesh, and Pakistan’s Hazaras, “all of whom are subject to persecution in their home countries.”

This seems to suggest that India should offer asylum to all the world’s persecuted and oppressed minorities. That illogical supposition is further implied by the EU resolution’s clause which accuses the CAA of contradicting Article 14 of the Constitution, “which guarantees the right to equality to every person and protects them from discrimination on the grounds of religion, race, caste, sex or place of birth.” Here, the EU misses the salient fact that the guarantee is only and exclusively to citizens of India, not to foreigners worldwide.

That same reservation applies to the charge that the CAA somehow undermines India’s commitment to the Universal Declaration of Human Rights, the ICCPR and the Convention for the Elimination of Racial Discrimination and amounts to “discrimination on the basis of racial, ethnic or religious grounds.” Again, a law or regulation for domestic application like the Constitution has no international application.

Apart from his vote-catching political appeal, the CAA offers some hope to the 17 million Hindus of Bangladesh and the eight million in Pakistan, in addition to those already in India in the pipeline for citizenship. That is justification enough.