Distressed times – just watch what is happening to gold

Photo by Michael Steinberg from Pexels India normally imports around 800 tonnes of gold each year. But 2020-21 could see it fall to around 100 tonnes. It is early days still, and final figures have yet to come in. But market estimates put this year’s imports at a dismal 100 tonnes.

But the celebratory mood gets muted when one realises that the slump in gold demand could mean that India suddenly, for the first time in decades, had lost its purchasing power. It could mean that people were so desperate that they could not put money aside to purchase gold. Do bear in mind that much of individual gold is purchased by small income earners – often employed in the unorganized sector. They purchase it for a newly born child, a marriage, or a special gift for a relative. Gold is for celebrations. The inability to purchase gold is an admission that these are not times for celebration any longer.

Even the first wave of the pandemic did not hurt purchasing power as much as is now becoming evident. Or, could it be a delayed reaction because the final numbers had yet to be totted up. However, the manner in which other indicators too point to a worsening of the purchasing power crisis should compel India’s planners to sit up and take a more serious view about developments.

Unfortunately, eyeballs are rivetted on arrests of protestors (even media groups), cases against Twitter, a wild chase to abduct and bring back an absconder. Instead, they should all be focused on ways to create jobs and restore the clout of purchasing power in India. India -- as a big attractive market -- is dying. The gasps can be heard by everyone who cares to listen. Even UBS has finally come out with a statement that it does not expect a V shaped recovery in India for at least a year.

It is rural India that sustains the demand for gold.

Thus, fall in gold consumption points to a crisis in rural and MSME India. This anxiety is confirmed by another development. Gold loans reached an all time high. Indians normally do not pledge gold unless it is for some dire need that normal sources of income or mortgage-able items cannot fulfil. Indians are sentimental about gold (and property). When gold loans soar, it points to a deep urgency, which left them with no other option but to pledge their gold.

Says VP Nandakumar, MD and CEO, Manappuram Finance, "The national lockdown increased the risk aversion on the part of banks and other NBFCs, leading to a credit squeeze, while surging gold prices led to customers increasingly opting for gold loans.’’

Together, the crash in gold imports and the surge in gold loans point to distress of a type that normal economic indicators do not reflect.

And do bear in mind that the figures captured by the RBI and other agencies relate only to the organised gold loan market. Nobody is willing to talk about how big the gold loan market is in the unorganized sector.

In fact, if one looks at government and market sources, everyone is going overboard in telling people that the worst is over. That the economy is on the rebound. Maybe good days will arrive (finally).

But gold is one commodity that seems to tell another story. The demand for this metal has collapsed to such an extent, that gold prices have also turned soft. After hitting a peak of around Rs.51,000 per 10 grammes on 2 June, it has settled to levels under Rs.50,000 currently. If demand for this metal does not improve, prices could fall further because India and China are the world’s largest consumers of gold.

Take a look at other indicators underscores what is hurting the economy. One of them is the loss of jobs. And job losses are of two kinds. 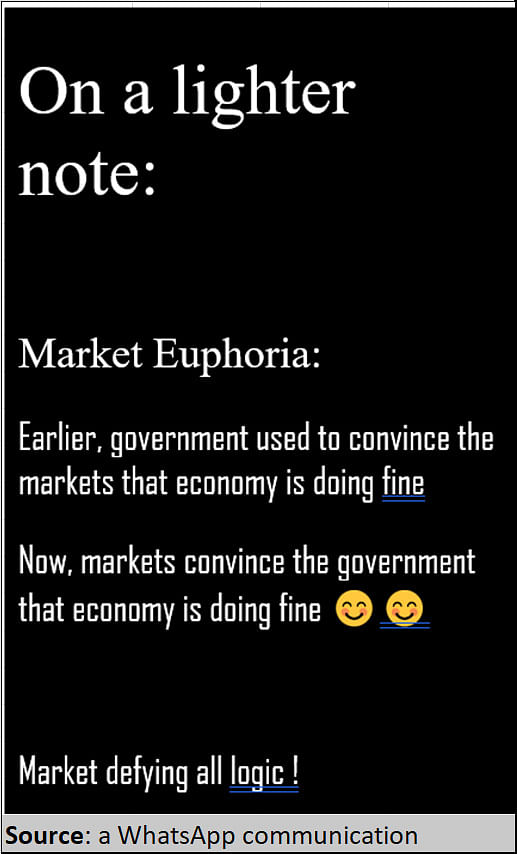 Job losses will mean more distress, more personal loan defaults, and possibly more borrowing against gold. Brace yourselves for even more turbulent times, no matter what the government tells you.

Forebodings about the coming crisis are echoed even by D Subbarao, former RBI Governor. Speaking to PTI, he expressed concerns over the "extreme unevenness" in economic recovery and "sharpening inequalities" between upper income segments and lower income households in the country, cautioning that the trend will hit growth prospects going forward. He also termed this uneven recovery "morally wrong and politically corrosive,"

Instead of strengthening the economic foundations of India, he lamented that the current liquidity in the domestic market and foreign fund inflows are leading to soaring of prices of stocks and other assets despite disruptions due to Covid pandemic.

In fact, it is bizarre that the stockmarkets should be racing ahead despite these portents. Most investment fund managers keep explaining that the rise in the market indices reflect a glowing future. It is at such times, that a humorous quip doing the WhatsApp rounds makes more sense that all the theories put forth by market pundits (see pix)

And this brings one to another pain point for India. At the heart of the crisis are precisely the two fears that Subbarao highlights. One relates to the unwillingness on the part of the policymakers to address the "extreme unevenness" in economic recovery and "sharpening inequalities,"

Nothing expresses this better than a comparison on the income group structures in India during pre-pandemic times and post-pandemic times. Look at the way government policies allowed the middle class to shrink by at least 67 million, and the number of poor expand by 75 million. But when it came to lower income groups, India fared far worse than China. In fact, while the low-income-middle-class saw numbers increase by 30 million in China, India saw a decline of 35 million. And when it came to poverty-stricken people, China saw an increase of 1 million poor people while India saw this number swell by 75 million. China’s primary concern was keeping people away from poverty. India seems to have been concerned with protecting the affluent. Thus, while the world was focussed on reducing poverty, India achieved the opposite.

Look at the way bank frauds continue. Consider the haircuts given to loan defaulters (haircuts have been as high as 90% in some cases). Assets being transferred to their new owners at ridiculous prices is one thing, but allowing promoters to retain assets which were acquired out of ill-gotten gains is extremely worrisome. Consider some of the recent instances:

And the list goes on. The ultimate loss is borne by taxpayers, whose money is used to recapitalise banks, and yet leaving the original promoters laughing all the way back home. Thus, promoters got richer while taxpayers became poorer. The unevenness sharpened.

As mentioned earlier, the first priority for the government must be increasing purchasing power. The best way to do this is to invoke minimum price protection for milk and vegetable farmers across India. The three farm legislations that the government has been waxing eloquent about does nothing for these segments. Milk is three times larger than rice and wheat together. Yet it has been ignored.

Begin with Uttar Pradesh, where the numbers are the largest, and poverty most acute.

Simultaneously, ease the conditionalities for investments. Stop distracting people with attacks on protestors and media groups. Focus on economic growth.

Start with giving farmers the guarantee of minimum prices – not just for farmers of rice, wheat and maybe pulses. Give minimum prices to milk farmers of Uttar Pradesh – the country’s largest producer. That will give farmers purchasing power, without being reduced to the status of beggars seeking grants and doles. Do the same to farmers of oil seeds and even vegetables. Please remember that 65% of the population stays in rural areas.

Second, immediately start giving grants to families of people who have died. Make public those lists so that nobody is left out – be they with or without Aadhar cards. This must be applied uniformly across the country, irrespective of states which are governed by opposition parties.

This will have three major benefits.

Even The Economist states this quite categorically in its 12 June 2021 issue: “News organisations . . . have speculated that India has suffered perhaps five to seven times more “excess deaths” than the official number of covid19 fatalities, currently just over 355,000.” That could put the number of deaths at over 2.4 million! The strongest appeal has come in from T V Narendran, President, Confederation of Indian Industry (CII): “There is fiscal headroom of up to Rs. 3 lakh crore and this amount can be channelised towards direct cash transfers to the vulnerable people, higher allocation for MNREGA, short-term GST rate cuts and lower excise duty on fuel.”

Demand can also be revitalized through a time bound tax concession of interest rate subvention for home buyers, a LTC cash voucher scheme as done last year and extending the Atmanirbhar Bharat Rozgar Yojana till 31 March 2022,

All this will be in addition to the things this author has spoken of in his series which outline an agenda that the government must follow if India has to be revived.

To conclude, India is bleeding. It needs to be revived. And it won’t be easy. The first step will be ensuring farmers get the right price for their produce. Milk ought to be the priority because the largest number of farmers are engaged in animal husbandry. Crops other than rice and wheat should be the second priority. Simultaneously, MSMEs need to be bailed out. Unless there is purchasing power, there will be no vibrant India. No acche din ahead.

HomeAnalysisDistressed times – just watch what is happening to gold