Couples as HC judges, in same court : Interests of justice served, doubly so?

The Consolidated Fund of Tamil Nadu will pay the salaries of Justices Kuppuraju and Valayapalayam. Each state has its own Consolidated Fund which receives revenue from the taxes paid by its citizens. This implies there is no cogent reason why either judge should not be transferred to any of the other 25 high courts, where there are 414 vacancies out of a sanctioned strength of 1,079 judges.
Olav Albuquerque 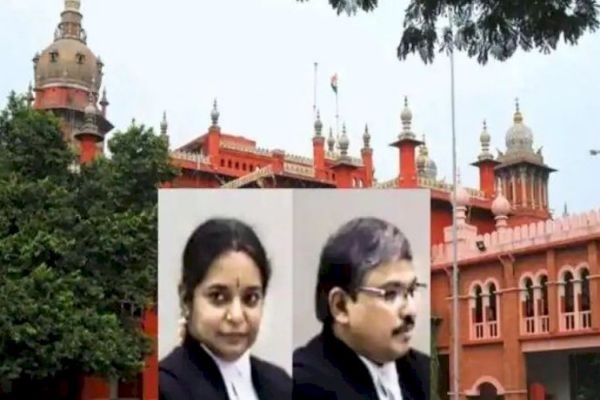 The Constitution of India never envisaged the swearing-in of a husband-wife duo as high court judges at the same time and place, for the same high court. This is why the swearing-in of Justices Murali Shankar Kuppuraju and Tamilselvi T Valayapalayam, who are husband and wife, created judicial history of sorts last week. The duo were jointly administered the oath, with eight other new judges of the Madras high court – one of the three chartered high courts set up by the British in 1862 before the Constitution was envisaged.

The only precedent is that of Justices Vivek Puri and Archana Puri, who were sworn in as judges of the Punjab and Haryana high court on the same day in November 2019. Both these couples will be jointly taking home salaries of Rs 4,50,000 per month, apart from enjoying the other perks and amenities given to high court judges whose salaries are higher than the Rs 1,00,000 per month paid to MPs who enact law for these judges to interpret, according to their own perspective. This is how the judges devised the collegium system to appoint themselves in 1993 – which was never envisaged by those who wrote the Constitution.

The present collegium, headed by the 47th Chief Justice of India (CJI) Sharad Arvind Bobde, approved the elevation of Justices Kuppuraju and Valayapalayam, which was in turn approved by the ministry of law and justice without much fuss. The same ministry did not approve the file of Justice K M Joseph in 2018 but it was only after an outspoken judge like Justice Jasti Chelameswar insisted that the judiciary should not succumb to the diktat of the government, that the Dipak Misra-led collegium reiterated the name of Justice Joseph, who was elevated to the Supreme Court but lost his seniority to Justice Indu Malhotra.

It appears that husband-wife couples within the same high court are acceptable as judges, despite a transfer policy being in place. However, the government does not allow couples to be posted in the same district if they are IAS officers. It is doubtful if CJI Dipak Misra would have reiterated the elevation of Justice K M Joseph if Justice Chelameswar had not been adamant about it.

It was alleged that Justice Joseph was not elevated because he had struck down President’s rule in Uttarakhand when he was the chief justice of that high court. This allegation has been vehemently denied by the Centre, which said other high courts did not have adequate representation in the Supreme Court, which was why they returned his file to the collegium.

Be that as it may, the Consolidated Fund of Tamil Nadu will be paying the salaries of Justices Kuppuraju and Valayapalayam. Each state has its own Consolidated Fund which receives revenue from the taxes paid by its citizens. This implies there is no cogent reason why either Justices Kuppuraju or Valayapalayam should not be transferred to any of the other 25 high courts, where there are 414 vacancies out of a sanctioned strength of 1,079 judges.

The high courts of Allahabad, Calcutta, Punjab, Patna and Delhi have the highest vacancies with a surge in arrears. Judges like Kuppuraju, Valayapalayam or Vivek Puri or Archana Puri would be able to prove their judicial acumen in these high courts by delivering speedy landmark judgments, to reduce the arrears of 52,00,000 pending cases across these 25 high courts.

However, given the fact that the CJI Sharad Arvind Bobde has just four months left to retire, it is doubtful if he will take quick policy decisions to reduce these arrears because the venerable mother of Justice Bobde was allegedly cheated to the tune of Rs 2.5 crore by the caretaker of the family property in Nagpur which is the ancestral town of the CJI. This will add to his woes – on the family front.

The police arrested the caretaker, 49-year-old Tapas Ghosh, on December 8 after it emerged that Mukta Bobde, the nonagenarian mother of the CJI, was cheated by Ghosh, who was paid a commission from the payments made by those who organised marriages and functions in Seadon Lawn, near Akashwani Square in Nagpur.

Exploiting the CJI’s mother’s old age and ill-health, Ghosh allegedly kept her in the dark about the huge amounts earned by renting out Seadon Lawn for marriages and other functions. Ghosh and his wife allegedly did not deposit the amounts they collected from renting out the property for these functions.

The fraud emerged when customers did not get refunds of their booking amounts for functions cancelled during the pandemic. The fact that Ghosh had the shamelessness to cheat the old mother of the CJI leads us to conclude that millions of senior citizens like Mukta Bobde are denied justice due to pending arrears.

CJI Bobde is one of just five Supreme Court judges whose assets are declared on the official website. From this, we learn that CJI Bobde has inherited a bungalow called Shrinivas Bhavan, standing on a plot of 2,355 square metres and another building on a plot of 4,712 square metres (both at Nagpur), which belongs to his HUF, apart from a flat at the Judges Cooperative Housing Society in Bandra (east), where he has given a half share to his son. Seadon Lawn is owned by the CJI’s mother, which may be why he has not declared this in his assets available on the official website.

Like the two husband-wife couples who have been sworn in as judges in the Madras high court and Punjab and Haryana high court, a segment of high court and Supreme Court judges are very well off, which should not deter them from ensuring speedy and quality justice for hapless migrants who trudged on foot to their home states during the lockdown. These migrants do not have ancestral properties to fall back upon or salaries of Rs 2,25,000 per month, which high court judges receive.

The writer holds a PhD in law and is a senior journalist-cum-lawyer of the Bombay high court.