Banking and finance sector in budget 2021: Are we putting the cart before the horse?

When the pandemic struck India, it was amazing to watch the Ganges suddenly become quite clean by May 2020. | PTI

The finance minister has been lauded for her decision to create a bad bank and thus clean up the books of public sector banks (PSBs). Many bankers have heaved a sigh of relief.

But, maybe, she should pay heed to the little anecdote about the Namami Gange project in North India, which is meant to clean up the Ganges.

When the pandemic struck India, it was amazing to watch the Ganges suddenly become quite clean by May 2020. It was a wonderful sight -- blue and sparkling. A breathtaking sight indeed. Ironically, this happened without any of the cleaning activities being carried out (the lockdown affected the cleaner staff as well).

And then the penny dropped. The reason was soon obvious to everyone. It was something that most experts had been saying all these years. The pandemic and the lockdown forced the polluting units to shut down. That prevented effluent discharge. And that, in turn, left the Ganges cleaner, even without the efforts of the staff employed by the Namami Gange project.

In the meantime, the government had already spent over Rs 8,000 crore.

Experts had always reminded the government about the foolishness of trying to clean the Ganges, without first shutting down polluting sources. Thus, what the government did not do, the pandemic succeeded in doing. It forced a shutdown of polluting (and other) units.

Voila! The Ganges was clean again.

A similar situation is happening in India banking. The government wants to create a bad bank and clean up the mess in India banking. But has it stopped the polluting parties to stop polluting, thieving, and swindling the banks? In another five years, the NPAs will begin to climb again, and someone in the finance ministry will close down or merge a few more banks, and even ask for the creation of one more bad bank.

To understand this, one must also accept that most of the bad loans belong to the corporate sector, not to farmers (see chart). And behind many of these industrialists who went belly-up were political heavyweights, as some of the investigations into Satyam, IL&FS and several others have begun to show (many of the findings may never be made public). In most cases, companies went sick, but the promoters ended up more opulent than before. To date, not a single political heavyweight has been convicted for such cozy deals. Occasionally, they have been arrested, pending enquiries and investigations. They have then been released either on bail, or because the courts were informed that there was no evidence against the parties.

And the present government is equally culpable, even though many of the NPA figures are yet to show up. The Economic Survey points to declining NPAs: “Gross Non-Performing Advances (GNPA) ratio (i.e., GNPAs as a percentage of Gross Advances) of Scheduled Commercial Banks decreased from 8.2 per cent at the end-March 2020 to 7.5 per cent at end-September 2020”. But that was because NPAs have got ‘concealed’ thanks to a Supreme Court order on 3 September 2020 that “the accounts which were not declared NPA till 31.08.2020 shall not be declared NPA till further orders”. When the actual tally resumes, you can bet that they will soar. 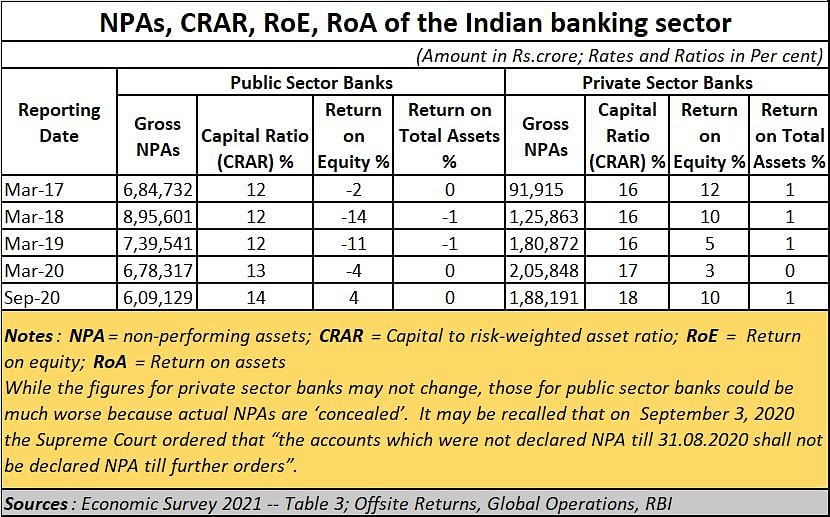 Just look at the way bank frauds have continued to climb even after 2014. The instances of fraud have increased, and so have the amounts involved.

Most of the NPAs will be with PSBs. Just look at the nature of frauds. Over 85%of them belong to PSBs, and not at private sector or foreign banks. This points to management and governance issues. It needs cauterization of people with sticky fingers, or a penchant to kowtow to flawed instructions for abetting frauds. That was one reason why Urjit Patel, former governor of the RBI (2016-18) wanted to stop RBI officers from being directors of PSBs. He wanted an end to what was potentially a conflict-of-interest situation. RBI was, after all, the regulator, and you could not have a regulator as a participant in frauds committed by banks.

Instead, the government rescinded this move of Patel, and allowed RBI officials to remain on bank boards. It chose to expose them to the graft and perquisites banks offered. In effect, the government itself was a contributor to banking frauds.

That is why the bad bank concept is a bad move, unless the causes of what caused the bad bank are first addressed. Unfortunately, the government does not appear to be keen on doing this. Watch how the formation of the new development finance institution (DFI) to steer funds towards infrastructure will also be through a revival of an old public sector enterprise .

The government’s complicity goes a step further. People still recall the imperious manner in which Finance Minister Nirmala Sitharaman instructed bank managers in November 2020 to ensure that Aadhaar cards and PAN cards were linked to each and every account before 31 December, or latest by March 31, 2021. She pointed out to them that an enabling provision had already been made in the Finance Bill of 2017, through Article 139AA in the Income Tax Act allowing holders of Aadhaar cards to be issued PAN cards as well.

This was despite knowing that Aadhaar was nothing short of a Trojan Horse that could cripple banking and accountability. Now combine the effect of bank frauds, and deposits through bogus Aadhar cards linked to freshly issued PAN cards -- and the extent of contamination of bank accounts becomes clear. No wonder then, even GST collections have begun to show a collection gap of around Rs.3 lakh crore (see chart). Thus, there is little cause for cheer if GST collections were higher than those during the corresponding period of last year. They ought to have been higher still, considering so much of money had been spent under the Atma Nirbhar schemes announced last year.

Thus, you have bank frauds and disappearing GST money that should have come to the exchequer. You then discover the immense probability of bogus bank accounts linked to bogus Aadhaar and linked PAN cards creating a huge financial quagmire. This swamp needs to be drained immediately. Creation of a bad bank without addressing these problems first will create another Namami Gange project, with more good money being poured over bad.

The phrase Atma Nirbhar was used frequently during the budget speech. But that doesn’t go down well with sectors where the government has promoted foreign interests instead of domestic interests.

Take for instance, coastal shipping. The budget intends to provide some support to Indian flag ships when they are competing with global ships for Indian cargo to be transported through PSUs. While the details of the scheme are awaited (the industry believes the provisions will be good), the amount of relief of Rs.1,600 crore earmarked is minuscule because it is for five years.

To appreciate the angst of Indian shipowners, it is important to remember than unlike many other countries which reserve their coastal shipping business for domestic flagged ships, India recently de-reserved coastal shipping, thus allowing ships with foreign flags to bid for coastal business. That hurt because foreign flag ships enjoy a host of benefits -- like no income tax for crew to other taxes -- that Indian shipowners cannot avail of. The de-reservation therefore keeps Indian flag vessels at a disadvantage. The result is that the Indian shipping has grown – but overseas, not in India.

The ostensible reason for allowing foreign flag ships to enter coastal shipping was to generate additional business. That has not been achieved, say industry sources. granting the relaxation of cabotage has not been achieved and cargo continues to be transshipped over the Port of Colombo unabated despite the relaxation of Cabotage. They point out how the Adani port at Mundra continues to grow at the cost of JNPT port and how on the east coast Krishnapattinam Port continues to grow at the cost of Chennai. While some of its is definitely because the private ports are more competitive, the other reason is that the government has robbed Indian flag ships of their own business that almost every country offers, and which India enjoyed till recently.

This they point out is certainly not Atma Nirbhar Bharat.

A similar anomaly lies is the government continuing to retain the loophole which allows foreign funds to flow into political parties with no questions asked.

The amendment introduced in March 2018 allows foreign funds to influence domestic politics. Hence, at a time when the government raises shrill cries against foreign interference in commenting on India’s internal matters, the permission for foreign funds to flow into political parties’ accounts is extremely ironic, if not repugnant.

Finally, it is nice to hear slogans like one country one ration card. Business leaders say that it would be better if the government had introduced one country one tax instead. GST still remains state registration bound. So if a businessman registered in Mumbai goes to Goa to Chennai to promote his business, he is not allowed to set off the taxes he has paid there against the GST in Mumbai . Such issues are vexatious for small businesses. They register in just one state. But they would like to expand to other states. Exploratory trips are therefore needed. Big companies, on the other hand, have offices in several states. They are not disadvantaged. Once again, the government talks of helping MSMEs, but refuses to modify a tax provision that causes so much of heartburn. This too is neither Atma Nirbhar Bharat nor ease of doing business.

Eventually, giving away of freebies, populism, favouritism and even corruption is acceptable, if the country generates more money than is given away.

As mentioned repeatedly in these Budget series, it is extremely easy to use borrowed funds to grow GDP. Hence a V shaped economic upturn cannot be ruled out. The acid test will still be the same – is the country earning more than is being given away. Indications are that it is not doing that (see chart). 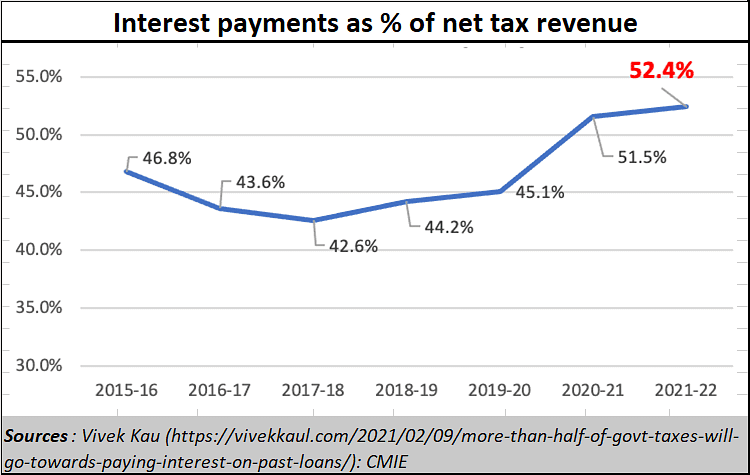 To earn more money than is being paid out by way of interest, the country needs more investments, not borrowings. It needs more income, not expenditure, and it needs vision to bring investors into India and to keep them happy. Retrospective laws, turning off the internet, selective investigations and hearing of cases, a sense of inequity and a clumsy tax system are not the way to make the investment climate either friendly or even healthy. Not stopping the red spill from banks is also not welcome.

If India does not change, borrowings will continue to grow, and interest payments will crowd out funds required for growth and capital expenditure.

That is why mere slogans and lofty pronouncements are not enough. They need to be backed by sound legislation, economics, investor friendly policies, accountability, and governance. One only hopes that all the five will be in evidence in the coming months.

HomeAnalysisBanking and finance sector in budget 2021: Are we putting the cart before the horse?