Bribery at all levels, in its five shades

The Modi government prides itself on trying to usher in corruption-free governance. Maybe someone should tell its legislators that the best way to clean up governance is by making bribe-giving legal.

This is what Kaushik Basu, former Chief Economic Advisor (CEA) also recommended way back in March 2011 (http://www.kaushikbasu.org /Act_Giving_Bribe_Legal.pdf). The trouble is that the government makes all bribe-giving a crime. Thus the bribe-giver and the bribe-taker both become guilty.

When both are guilty, neither dares complain. The bribe-taker does not care to complain because he has already benefited from the ill-gotten money. And by accepting the money, he too has committed a crime. Why should anyone choose to hang himself when the going is good in every which way?

But life can be hell for the bribe-giver. He wants a bailout most of the time. He is the one who had to pay the money, often because of no fault on his part. He would love to complain and recover the money paid.  But he dare not, because in addition to having lost his money, he may also lose his freedom. He could end up behind bars. 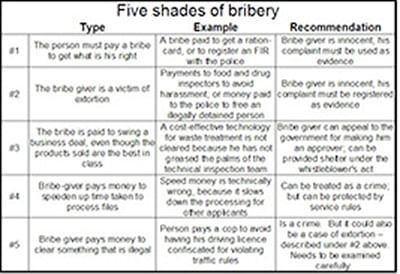 Corrupt officers know this quite well. The food and drugs inspector, the shops & establishments’ inspector, and the policeman all know this. If you don’t pay the bribe, they can make living hell for you. And if you do pay a bribe, you know that you just cannot complain, because you have just committed a crime – at least in the eyes of law.

India’s legislators have thus made the law a joke. It has been designed to protect, even promote, bribery at all levels. That is why most cases of bribery go undetected, even unresolved.

That is why, if Prime Minister Narendra Modi is serious about making the lives of common people easier, he needs to get his legislators recast all bribery into five sections (see table).

The man who has to pay a bribe to get even the simplest of documents – which is his right – should not be treated as a criminal at all. The moment such a law is introduced, the man will try find out a way to record the act of bribe-giving – an audio/video recording, a witness, marked currency – so that he could complain and get try to get his money back. Today, he may have the evidence.  But the moment he complains, he will go behind bars. That is because his complaint is an admission that he has paid a bribe.

The second category of bribes is when it is a case of extortion. Policemen do it often. They are known to have hauled up suspects and have kept them behind bars in order to get a confession out of them for crimes they may not have committed. Even when the actual culprit is caught, or evidence is provided that the locked up person is not guilty, cops ask the person’s family to pay a bribe.  That is nothing short of extortion.

The municipal clerk who refuses to clear a file of a builder – thus blocking his time and money – knows that the builder will have to pay up if he wants to do business. That is what happened when a builder committed suicide in Mumbai’s suburbs. He just could not afford to pay bribes

any more. And he could not afford to have his projects blocked either, hence he chose to end

his life. This eventually saw the suspension of some corporators. In cases of extortion, the victims must be treated as state witnesses, so that they can depose and help the government clean up the system.

The same thing happens in the third type of bribery. The person knows his technology is the best and most cost-effective. It could be for building roads, or cleaning industrial waste. But unless the technical team shortlists this method, the person has no chance of participating in a tender bid. So he pays a bribe.  True, this time – unlike the earlier two examples – there is a profit motive. But there is also a clear attempt to extort money. In such cases, the government ought to allow some deserving cases to turn “approvers” whose testimony is taken on record and the guilty persons apprehended and prosecuted.

It is only the fourth and fifth types of bribery which call for the prosecution of the bribe-giver as well. However, here too care must be taken. It is easy to make a case of extortion appear to be one where the bribe-giver is the guilty party.

After all, the bribe-taker is a wily person. He knows the laws. He knows how to assess people to identify vulnerabilities. The inspector, who does not clear a building proposal halfway after construction work has begun and money has been invested, knows which infractions he can charge each builder with. The charges are bang-on; but the invocation of these charges takes place only when a bribe is not paid, or when a complaint is registered.

If Prime Minister wants a clean government he must begin not just with senior officers and ministers, but with the cleansing of the system at bottom levels as well. That is where much of the exploitation of the weak is most rampant. The common man – with no godfather – is a very vulnerable person. Even the municipal sweeper can make life miserable for him.

It is only when the common man – the smallest person – is protected does a society become safe, even civilized.

Unfortunately most legislators and bureaucrats – who are often themselves beneficiaries of graft and payoffs – will not agree. They prefer the old ways of labeling both the bribe-giver and bribe-taker as criminals. Life is simpler that way.  You can make money, and you can also enjoy immunity because the bribe-giver will never dare complain.

The author is Consulting Editor with FPJ

HomeAnalysisBribery at all levels, in its five shades