Bodies down and by the Ganga: Covid, custom or counting trouble or all of the above, asks Shekhar Iyer

A big question was whether UP officials were taken by surprise at the news reports, or had failed to take steps to prevent this practice, which has been followed for some years
Shekhar Iyer 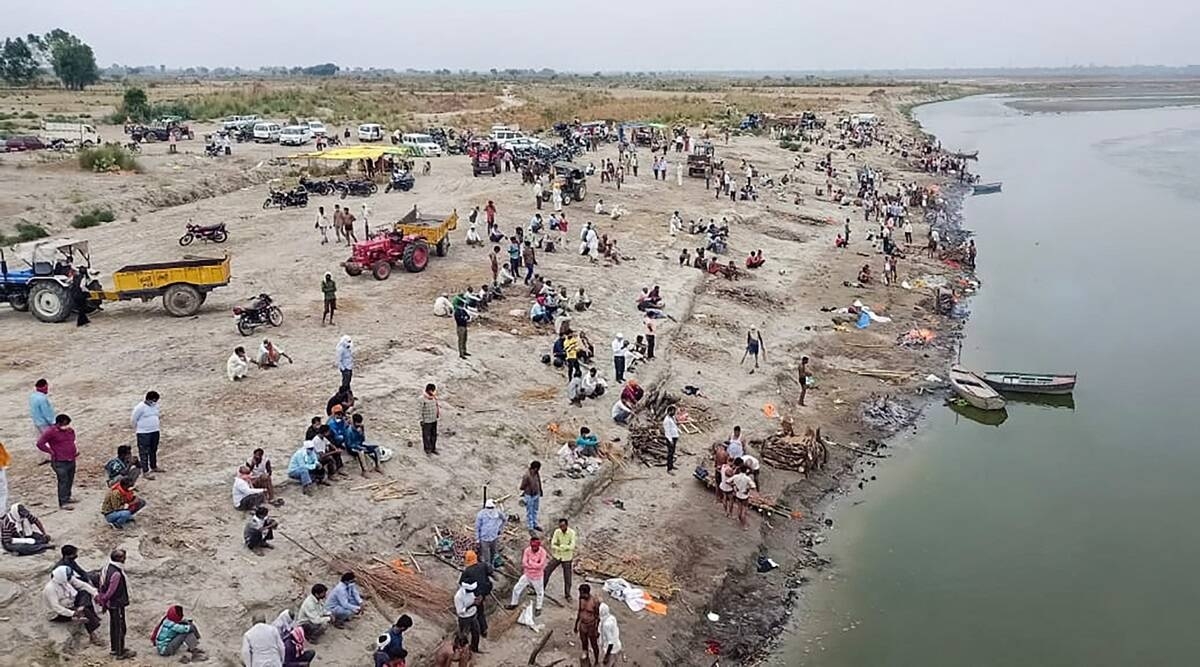 A few days ago, when mass shallow graves were exposed on the banks of the Ganga in various districts of Uttar Pradesh, there was outrage across the country as well as abroad.

Some Hindi newspapers reported that over 2,000 dead bodies were found to have been hastily buried or abandoned along the banks. There were also reports of floating bodies entering Bihar, reaching Patna. Naturally, as the media flashed these images of bodies buried in the river sands, a lot of us could not help concluding that the pandemic toll was higher than officially estimated.

Secondly, the existing facilities for cremation and burial were overwhelmed by the arrival of sheer numbers of the dead. Authorities had failed to anticipate and prepare for this eventuality and a number of people, who did not have enough money to cremate their dead properly, had taken recourse to this method-- to dispose of their dead.

As the flames of outrage singed the Centre and the concerned state governments, instructions went out to prevent the practice and organise proper cremation or burials for bodies arriving on the banks of major rivers.

A peeved Government of India asked Uttar Pradesh Chief Minister Yogi Adityanath to find out the facts behind these concurrences. Accordingly, Adityanath instructed local authorities to start patrolling the Ganga and the villages on its banks. Several local magistrates and other officials were deputed to ensure proper disposal of the bodies brought to the river banks.

A big question was whether the state officials were taken by surprise at the news reports, or had failed to take steps to prevent this practice, which has been followed for some years. There are reasons to suppose that, at least, UP officials were aware of the practice of dumping dead bodies in rivers. This practice has been prevalent in the state -- even before the visuals of decomposed corpses floating in the Ganga came on the social media.
With the second wave of the pandemic claiming a higher toll of lives by the day, even the National Mission for Clean Ganga (NMCG) had sent an advisory to states, asking them to “immediately stop” the dumping of bodies in the Ganga and its tributaries.

On May 12, NMCG Director General Rajiv Ranjan Mishra had written to the chief secretaries of five states – Uttarakhand, Uttar Pradesh, Bihar, Jharkhand and West Bengal – asking them to issue “specific directions” to the concerned district administrations.

We gather that the NMCG had issued an advisory to all 59 District Ganga Committees to take “necessary action” to address the issue of floating dead bodies in the river and submit an “action taken report” within 14 days.

In response, the UP officials had asked their district authorities to act fast in two particular stretches of central/eastern UP, as the epicentre of such practices were reported to stretch from Kannauj to Ballia. Generally, the Kanpur-Unnao region (in central UP) and the Banaras-Ghazipur area (in eastern UP) are stated to be high occurrence areas in this regard. Fortunately, western UP districts were not reporting such burials.
On their part, the Bihar officials informed the NMCG that the bodies were floating from the Uttar Pradesh side.

With the authorities in both the states on high alert, they have managed to bring down the number of such burials in the last 15 days. But, now and then, new areas of such burials have come to light. But the big question is: why do people leave their dead on the shallow banks?

Inquiries show that the practice of dumping dead bodies in the river is prevalent in central and eastern regions of India. Of course, poor families get cremation expenses from the local administration, in times like the pandemic. But many have opted to immerse or bury their dead because of long queues outside cremation or burial grounds in some cities and towns.

Many villagers concede that it is part of a customary tradition for families to immerse the bodies of their dear ones in rivers or bury them in the sands near the Ganga with the ’Ramnaami’ cloth spread over the grave. Villagers said, though bodies are normally cremated according to the Hindu rituals, in times of a pandemic or mass deaths, they can also be immersed in rivers or buried in sands near river banks.

Similar discoveries of floating bodies and shallow burials had caused political outrage in 2015 and 2018. However, the local people admit that the number of bodies floating in the Ganga this year is more compared to those in earlier years.

Interviews with relatives, and local residents by the local media show that, besides traditions, deep economic distress and the sudden rush to dispose of the dead (due to a devastating pandemic) could be among the main reasons for such disposals this time. A shortage of wood for cremations and the rising costs associated with funerals were also leaving some families with no option but to put the bodies of loved ones (if they had died from coronavirus) directly into the river.

Whatever may be the compulsions, there is a huge amount of politicking on this sensitive issue. From Congress leaders Rahul Gandhi and Priyanka Gandhi Vadra to other Opposition leaders, everybody is asking who is responsible for this shameful incident. Maharashtra Revenue Minister and Congress leader Balasaheb Thorat has said his state had not seen such scenes and was better off in this regard. In 2015, the BJP, which was in the opposition in Uttar Pradesh, had raised this issue against the Akhilesh Yadav government!

Political parties have every right to raise such questions. The dead deserve dignity. But nobody has tried to raise the basic question about the traditional practices that provide sanction for such an eventuality. Otherwise, why would people immerse the dead in the river or bury their dearly departed near the Ganga?

Just two days ago, a video emerged showing two men throwing the body of a purported Covid deceased into a river from a bridge in Uttar Pradesh. Two men, one of them in a PPE suit, can be seen lifting the body and preparing to throw it into the river Rapti. The incident was shot by a couple of people who were driving by the spot in the Kotwali area of Balrampur district. Police managed to identify the deceased and the body was handed back to the relatives for proper cremation.

A few days ago, the National Human Rights Commission (NHRC) called for the enactment of specific legislation for the purpose of upholding the dignity and protecting the rights of the dead. But more than having another law, we need to focus on the spread of education, health awareness and hygiene in those areas. There must be a permanent mechanism that helps the poor families to dispose of their dead. What is needed is for authorities to be on their toes, checking the immersion of half-burnt or unburnt dead bodies into the Ganga--at all times.