By refusing to apologise, the activist-lawyer declared such a forced apology would be “insincere” because he felt no remorse for his tweets, which were never meant to be contemptuous of the judiciary. Bhushan asserted, as a citizen he had a right to point out how the four CJIs had failed to protect the fundamental right of citizens and uphold democracy by allegedly succumbing to the government.
Olav Albuquerque 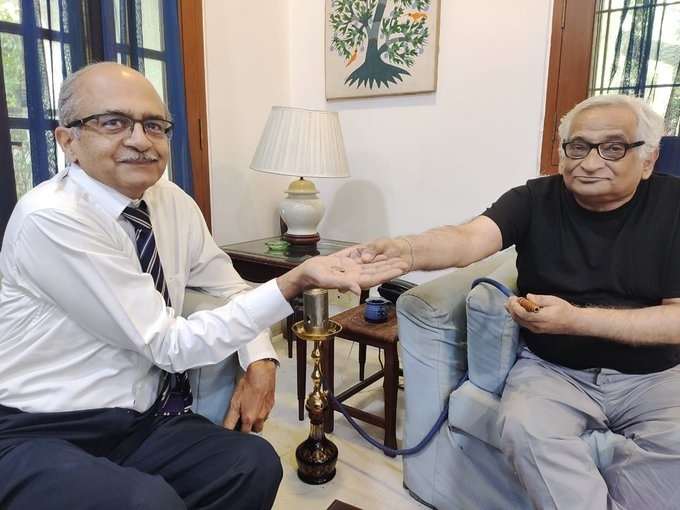 The Supreme Court created judicial history by sentencing contemnor-advocate Prashant Bhushan to pay a token fine of one rupee for committing contempt of court, thereby indirectly recognising that the right to free speech of 1.5 billion Indian citizens overrode the right to dignity of three former CJIs and present CJI Sharad Arvind Bobde.

Though the bench has not explicitly declared this as law, this inference is permissible because the bench could have made an example of Bhushan to the nation by sentencing him to a day’s simple imprisonment or hiked the fine to Rs 2,000. On December 17, 2017, Justice C S Karnan created history by becoming the first sitting high court judge to serve the maximum sentence of six months in jail, for alleging several high court and a few Supreme Court judges were corrupt. Unlike Bhushan, Karnan was both reckless and feckless.

Senior advocate Rajeev Dhawan immediately deposited a one-rupee coin with the registry on behalf of an exultant Bhushan, who immediately held a press conference at 4pm, despite the three-judge bench of the apex court headed by Justice Arun Mishra warning that freedom of speech was important but not absolute and that Bhushan had tried to “influence” its verdict by approaching the press on earlier occasions as well.

Bhushan declared at his 4pm press conference he would seek review of the judgment convicting him for contempt of court because his tweets were not meant to “be disrespectful of the judiciary. When the Supreme Court wins, every Indian citizen wins. If the court gets weakened, it weakens the entire Republic,” he pontificated. If he had refused to pay the one rupee by September 15, Bhushan would have had to go to jail for three months and be debarred from practice for three years.

This token fine is much less than the fine of Rs 100 imposed by a two-judge bench of the Bombay High Court in 1989-90 on the late journalist Madhav Gadkari, for publishing allegations that a sitting judge of the high court was “amenable to the seductive influence of a lady advocate and he passed orders in her favour obviously not on merits”.

Gadkari had alleged in the Loksatta in 1989 that another partially-deaf sitting judge removed his hearing aids when he grew tired of hearing lengthy arguments. In a third case, he alleged touts shared the booty extracted from victims of road mishaps with lawyers and judges of the Motor Accidents Cases Tribunal in Mumbai.

The late Ram Jethmalani, who defended the late Gadkari and the Loksatta in the high court, offered to prove to the court that every word his journalist-client wrote was correct. But successive benches recused from hearing Jethmalani. Until a division bench of the late Justices R A Jahagirdar and Nirgudkar declared in 1990, truth could not be pleaded as a defence in contempt cases. This prevented the media from exposing alleged corruption within the judiciary for fear of getting hauled up for contempt until Parliament amended the law in 2006.

But 30 years later, Prashant Bhushan has won a resounding victory for free speech. The three-judge bench headed by Justice Arun Mishra , declared the press conference held by Justices Jasti Chelameswar, Madan Lokur, Kurian Joseph and Ranjan Gogoi (without naming them) on January 12, 2018, was “wrong because judges are not supposed to go to the press but only speak through their judgments.”

"We hope it was the first and the last occasion that judges have gone to the press, and God gives wisdom to protect its dignity by an internal mechanism. Particularly when allegations made, if any, publicly cannot be met by sufferer (sic) judges," the bench said.

The point here is the four judges’ press conference was cited by senior advocate Dushyant Dave to defend his client, Prashant Bhushan , but was not argued at length in this contempt case. In the absence of the four judges, one of whom went on to become the 46th CJI, remarks about their conduct is confusing and irrelevant. After he retired, Kurian Joseph declared the then CJI Dipak Misra seemed to “be controlled by some unseen hand”. Those remarks, meant for the larger benefit of the nation, could also be construed as contemptuous.

Significantly, Justice Jasti Chelameswar is one of the signatories who supported Prashant Bhushan against the Supreme Court, of which he was once the senior-most judge. The judges appeared to have gone to the media as a last resort and they had Justice Arun Mishra in mind when they said the then CJI Dipak Misra was allotting sensitive cases of the government to benches of his choice to pre-determine the outcome.

To return to the Bhushan case, by refusing to apologise, the activist-lawyer declared such a forced apology would be “insincere” because he felt no remorse for his tweets, which were never meant to be contemptuous of the judiciary as they were his sincere beliefs. Ipso facto, Bhushan asserted, as a citizen he had a right to point out how the four CJIs had failed to protect the fundamental right of citizens and uphold democracy by allegedly succumbing to the government.

Attorney General K K Venugopal had urged the court to let Bhushan off with a reprimand. He pointed out the excellent work done by Bhushan in the field of public interest litigation and was on the point of saying nine other CJIs had declared there was corruption within the higher judiciary when Justice Mishra stopped him.

The writer holds a PhD in media law and is a journalist-cum-lawyer of the Bombay High Court.