A new documentary, Dropout Daughters, by Prateek Kumar, screened as part of Vikalp’s weekly programme (Vikalp was formed in 2004, when the Mumbai International Film Festival of Documentary and Short Films, started rejecting politically ‘inconvenient’ films), goes to a village in Rajasthan, a state where the female literacy rate is lower than the rest of the country and worse in the pandemic era
Deepa Gahlot 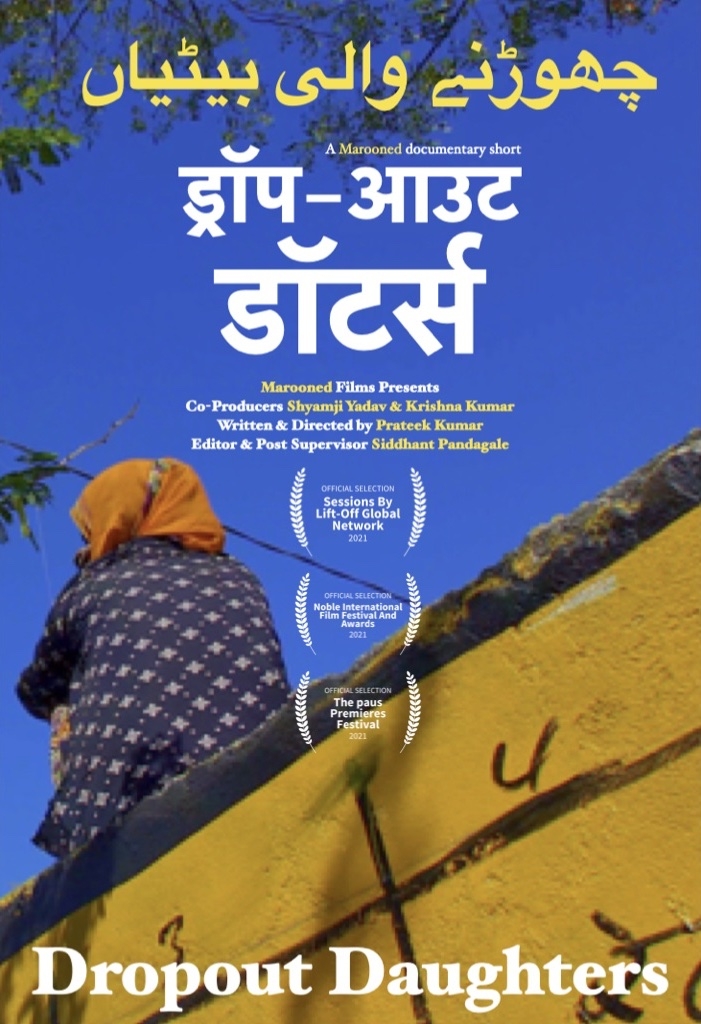 In cities, we take it for granted that every child that is part of a family will get at least basic literacy skills, if not a proper education. If there is a choice between sending a son for higher education or a daughter, we can also predict which child will get that chance and it would not necessarily be the brighter one. In rural areas, if a girl from a poor family is even sent to school, it is a minor miracle.

A new documentary, Dropout Daughters, by Prateek Kumar, screened as part of Vikalp’s weekly programme (Vikalp being the group that was formed in 2004, when the Mumbai International Film Festival of Documentary and Short Films, started rejecting politically ‘inconvenient’ films), goes to a village in Rajasthan, a state where the female literacy rate is lower than the rest of the country in any case, and worse in the pandemic era. A slogan that states ‘My god is in my boys’ painted on a school wall, just indicates what is obvious—the preference for sons.

Why girls drop out of school

In many families, it is poverty and the inability to manage expenses that keeps girls out of school, but early marriage (child marriage is an accepted custom in Rajasthan), housework and farm labour are the other reasons for the high school dropout rate among girls.

But what can one say about a girl missing her exam because she did not get the message about the dates, since girls are not allowed to carry mobiles, because “ladkiyan bigad jaati hain (girls get spoiled)”. Or another girl who broke her leg in an accident and could not sit on the floor in the classroom, so stopped going to school, probably because nobody cared enough to get her a chair. The fear for their daughters’ safety is always at the back of the parents’ minds, going by the dismal statistics of violence against women, and low conviction rates.

A major reason, however, remains the lack of employment opportunities. Parents, or in some cases, husbands, would ‘allow’ girls to get educated, but would also expect some kind of return on investment. With basic education, where would the females get a paying job? If, by chance, they do land a job and need to commute to work, there is that vexing issue of security again.

The girls themselves have little incentive to go to school, when they know that there is no escaping their fate – getting married and looking after the home and kids. A college education and the possibility of the doors of opportunity opening up for them, is a pipe dream.

This short film does not even go into caste, community and other obstacles placed in the path of education for girls. If they are sent to school, most drop out by Class 5. In many cases, the word ‘literacy’ means that the girl can just about write her name.

All this just leads to the fact that India has a large number of illiterate females – all that “Mulgi shikli, pragati zhaali” (Educate girls for progress) kind of slogans are just good enough to be painted on the backs of trucks and autorickshaws.

Another documentary screened earlier in the month by Vikalp, is an older film, but its stories connect somehow to those from other states. Candles In The Wind, directed by Kavita Bahl and Nandan Saxena, is about women labelled ‘farm widows’ in the prosperous ‘food bowl of India’ and herald of the green revolution – Punjab. Mainstream cinema shows colourful mustard fields and endless bhangra dancing in Punjab, when the situation in the villages is quite grim.

We know of the farmer suicides in Maharashtra, but life is no better in the agrarian communities of Punjab, where men unable to repay escalating loans, die by suicide, leaving the women to work on their own land holdings or as hired farm labour, struggling under debt, caring for their children and in-laws. They suffer from depression and a sense of hopelessness, living a bleak existence, just keeping their heads above water. They call it ‘timepass’, which has quite another meaning in Mumbai slang. For the farm widows, it means just getting by, or counting the days to the end.

Back-breaking work on farms does not fetch much money and if a harvest fails for whatever reason, or there is a serious illness in the family (the pesticides and fertilisers sold to farmers to increase yield are causes of cancer) they fall deeper into a pit of debt.

They are not educated enough to get jobs, because they were raised to be homemakers. In Punjab, there is a custom of a widow marrying her husband’s brother, but widow remarriage is still not that common, and, as one of the harried women says, nobody comes forward to help, but they don’t leave us alone either.

They hope for their loans to be waived, their children to get government jobs, and for their lives to be less of a grind. Unlike the women of Rajasthan, rural Punjabi women are not confined to the home in ghunghat and they are, if the need arises, capable of standing up for themselves. Some of them talk of participating in rasta or rail rokos to get their demands heard, of shutting down bars in their villages to deal with the alcohol menace, but the women also talk with a sense of despair, even if it is couched in unbreakable dignity. By the end, the interviewer (and co-director) is reduced to tears, when she tries to give an old woman some money to help her, and she refuses.

There are always stories of hope and of beating the odds too—like a scheme to provide girls with bicycles that enabled them to go to distant schools. Of NGOs, that work to help girls to get an education, of families that defy the odds to give their daughters a better life.

Dropout Daughters reminds us that Jyotiba and Savitri Phule had fought to set up schools for girls in 1848. So, 173 years later, education for girls is not taboo, but female illiteracy has not been eradicated either. Maybe it is time to act on those shiksha and pragati slogans, rather than agitate over bindis and mangalsutras.