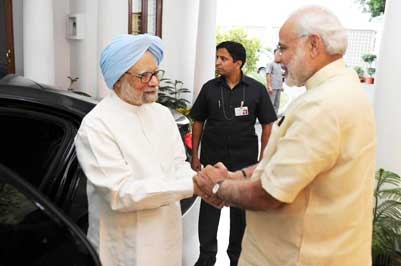 Homo sapiens, according to environmentalists, will be extinct in an early stage of the third extinction cycle which has already begun but a species, Homo honestus, has extinguished, at least in the public life of India. One man, we have been told over the last 11 years, has been waging a lone battle: Manmohan Singh.

Notwithstanding the exposés, an espousal of ‘Singh is clean’ sentiment by Swamy Subramanian silenced sceptics. The main defense was the quid pro quo element: a benefit was given in exchange for something received. The honest and honourable Singh gave a clinching evidence of his innocence on 27th May: “… I have not used my public office to enrich myself, family or friends,” period. Cynics would have us believe that the honest man allowed the loot for the benefit of his bosses. Sometimes, in a country of credulous people, a person in a high position who is not upright in the least and who is not perturbed by the erosion of the treasury, nevertheless creates and cultivates an image of morality using physical frailty, quiet manners and a simple lifestyle, an image, which then captivates even his opponents.

Bigger the bribe, fouler the felony. What we have not realised is Dr. Manmohan Singh has received an enticement even larger than that of A. Raja — Prime-ministership of a nation with a $2 trillion economy for 10 years. How much would the CAG value the decade-long Indian Premiership? Does this not constitute a legal quid pro quo? Who is responsible to reclaim the loot and punish the looters to deter future rulers? We all, intoxicated by our outrageous dreams of cleansing the system and overzealousness, misunderstood that it will be the second most honest man, Narendrabhai Modi.

Righteous to the core, Prime-Minister Modi had warned against such wild hopes even before the elections: “… If we start lugging this garbage (of Vadra scam) around, when will we do good work? …When I become Prime Minister, people will realise that I am an ‘achha admi’…” Now who would have to realise his goodness? Obviously not his supporters like us, but his detractors.

True to his word, he embarked upon the Achha Aadmi Abhiyan, showering love on his opponents. The first adversary to realise Prime Minister Modi’s benevolent nature was Shashi Tharoor, mired in the Pushkar case. Next in line were Sharad Pawar and his nervous nephew. The corrupt ministers and officers of the UPA era sighed with relief, until the government stirred a little when Lalitgate and Vyapam were hurled at it, and while not a single fraud was discovered in the last one year, during three days of the monsoon session, three were bared, showing off ‘reveal a scam on demand’ capability.

The UPA milked the idea – fry the small fry to catch the big fish – against Modi, the Chief Minister. No such dirty tricks in Modi’s repertory. The CBI court’s summon to Manmohan Singh facilitated Modi to prove his credentials to the mightiest in the opposition, the Congress President, whose march to Singh’s residence, some wicked leaders thought, was aimed at preventing the spilling of beans by the ex-Prime Minister. A news channel reported that Dr. Singh had contacted the topmost BJP leader for support and hopes of decoding the grand embezzlement drowned without a whimper.

An intriguing aspect of Achha Aadmi Abhiyan is that critics turned admirers from BJP or allied parties do not qualify for the showering of love, as Advanis, Joshis and Uddhavs would corroborate.

The quid pro quo, though, is all topsy-turvy. What reward does he get by letting the crooks go scot-free? He owns up UPA’s sins, loses millions of die-hard supporters like this writer, demoralises gems of integrity like Fadnavis and General V. K. Singh in his party and raises the spectre of defeat in the 2019 elections.

Unlike Vajpayee, who might have compromised with the Congress on some issues, Modi enjoys a comfortable majority in Parliament. The Congress would also cooperate in the Upper House for such small and rightful favours.

Why does he do it? Mysterious to the outside world, to those who probed Modi’s mind, the explanation, which he himself revealed on 7th June, is clear. He wants to follow the footsteps of Mahatma Gandhi – to conquer people with love. As a benign ruler and philosopher who wanted to be a sannyasin, in these turbulent and dark times, he has found and lit a last diya of amity and warmth on the bank of the Ganges and he hopes that there would be a brief period of rediscovery, of such illumination that party ideologies would melt, space would lose its vast dimensions and draw comfortably around his munificent magic, and all, people from every corner of the nation, would transform, hoping that the darkness would last longer so that Modi might light another diya.

Since no one alluded to ‘Modi for Nobel’ so far, he himself vented his lament in Dhaka: “…If the pact with Bangladesh was inked in some other part of the globe, it would have been worthy of a Nobel Prize.” The Nobel was on his famed chest while he was still redrawing lines on the border map.

He wants no opposition for his pitch for the Nobel Prize – not from the Congress, not from Bangladesh, not from Mongolia, not even from Pakistan.

But like Mahatma Gandhi, he too will fail in his pursuit of the Nobel. Moreover, Mahatma Gandhi’s methods will not work now because after 70 years, Indians have become marginally smarter, and meaner.

Prime Minister Modi seized the command of steering the giant and complex country because he relishes confronting challenges, run into storms and live dangerously, tackle tough issues head on, and see if he could turn chaos into order, and not, when he stepped down, discover that he had not occupied the right chair.