A week after Maharashtra Day, New Delhi sets off worrying tensions with Mumbai

The old strained relationship between Gujarat and Maharashtra has come to the fore with protests claiming that the International Financial Services Centres Authority has been “hijacked” from Mumbai in an attempt to build a rival centre in Gujarat. Gandhinagar in Gujarat already houses the IFSC.
Lekha Rattanani 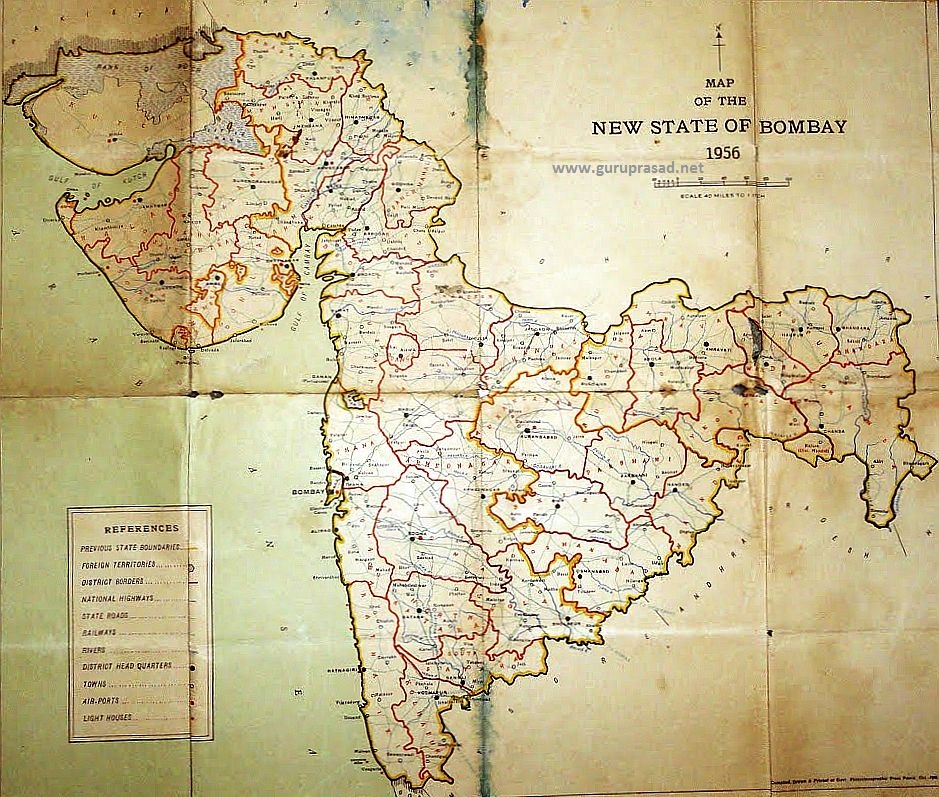 Bombay State, 1956, before the formation of Maharashtra on Labour Day in 1960. | Guruprasad's Portal

A highly strained relationship between Maharashtra and New Delhi is being tested by the recent decision of the Modi Government to set up the International Financial Services Centres Authority with its head office at Gandhinagar in Gujarat. This is where India’s first International Financial Services Centre is located at the Gujarat International Finance-Tech City (GIFT City) in Gandhinagar. It takes the Gujarat city a step ahead in its aspirational goal of becoming a global financial centre on the lines of Hong Kong and Singapore in the East or London in the West. A notification from New Delhi virtually snatched the position from Mumbai which is the financial capital of the country and set up the “IFSC Authority”, a financial regulatory authority for the first time in Gujarat.

The decision comes at a time when the Uddhav Thackeray-led Maharashtra Vikas Aghadi is struggling to curb the spread of COVID-19 in Mumbai and other cities in the State. It is seen in political circles as an open challenge to the position of Mumbai and one that the State Government could not leave unanswered. The first response came from a normally restrained Sharad Pawar who questioned the decision and called it “disappointing, and a move against Mumbai’s established status as the nation’s financial capital”. He urged Modi to reconsider the decision and not denigrate the stature of the Prime Minister with decisions that are not “broad, inclusive and of a national level”. But what he wrote to Modi seems to have received more attention as it came with an implicit warning that the move to shift financial institutions and business houses away from Maharashtra would create “unnecessary political disturbances”. Pawar’s NCP is one of three constituents of the MVA and while he himself holds no official position, the Maratha leader is seen as a guiding light bringing to the table five decades of experience, four terms as chief minister, and astute strategic and administrative skills.

His words are a clear pointer to strains that are more than the usual political tug-of-war, and hark back to the old strained relationship between Gujarat and Maharashtra. At the time of the reorganisation of States along linguisitic lines (after Potti Sriramalu’s fast unto death resulted in the creation of Telugu-speaking Andhra Pradesh), the then bilingual State of Bombay included Maharashtra and Gujarat. This is when the Samyukta Maharashtra Movement took root for creating of a State out of the Marathi speaking areas. The demand was fought as Morarji Desai, a Gujarati, was Chief Minister of Bombay State and was responsible for police action in which 105 activists were killed. A memorial stands in their honour today at a prominent roundabout that used to be called Flora Fountain and is now known as Hutatma Chowk.

Eventually, Maharashtra was born on Labour Day 1960. The State celebrated its 60th Foundation Day this month. But the 1960 formation was not without a Gujarati-Marathi tussle, the battle being over Bombay staying with Maharashtra or becoming a union territory. When Bombay went to Maharashtra, and became its capital, Gujarati business houses and industry were upset as they claimed to have built the city and made it the business capital. But Mumbai had more Marathi-speaking people than Gujaratis. That wound still stays and politicians in Maharashtra are always wary of New Delhi’s attempts to reduce the status and position of Mumbai as a financial centre.

The background shows the nature of the trouble, the depth of the issue and potential for creating fires that can be difficult to control. Utterances by the Shiv Sena, editorials in its mouthpiece Saamana and questions even by the Uddhav Thackeray’s cousin Raj Thackeray all point to the consternation that the Centres’ decision has created.

The Manmohan Singh-led UPA initiated a proposal to upscale Mumbai and place the city in the highest echelons of finance, fashioning it into an international financial centre which would bring back the money that had migrated to Dubai, Singapore, and London. Towards that goal an IFSC was proposed by the Making Mumbai an International Finance Centre (MIFC) committee headed by Oxford International Finance Chairman & CEO Percy Mistry. The IFSC is a nerve centre of financial services within a country, bound by a set of rules and regulations different from the rest of the country. Then came the global financial crisis of 2008 and nothing moved. But Narendra Modi, then chief minister of Gujarat, took up the chance to build a rival financial hub and IFSC in 2012.

Mumbai currently hosts all the financial regulatory authorities and institutions from the Reserve Bank, Securities and Exchange Board of India, Bombay Stock Exchange, National Stock Exchange, major bank and business headquarters. The IFSC and IFSC Authority would have enhanced the city’s image as an important financial node, besides creating some 200,000 jobs from direct and associated ancillary services.

The strong protests from Maharashtra that Modi and Gujarat have “hijacked” the financial regulatory authority and are trying to build a rival centre in the neighbouring State are quickly downsliding into the bitter history between the two States. In the past the rivalry between the two linguistic groups has often reached the streets. The Shiv Sena led by its founder Bal Thackeray first attacked the Gujaratis, accusing them of taking away business and opportunities from Maharashtrians and exploiting locals. This has never left the agenda. Ever since Modi proposed the “bullet train”, he has been attacked by Maharashtra and the train labelled as an unnecessary expenditure.

The move to shift the IFSC authority comes at a time when there are many points of contention between the Modi government and the State. The rise in COVID-19 numbers has had BJP leaders criticising the manner in which the MVA is handling the crisis, some even calling for the army to control the situation. The recent lynching of two people clad in saffron in the outskirts of Mumbai, have again led to a war of words between the BJP and the ruling constituents of the Maharashtra government. But the current dispute is riskier in that it reignites old tensions and can cause trouble at a very different level. A Prime Minister from Gujarat, seen as favouring Gujarat, at the time of a pandemic when numbers are rising in Maharashtra, taking potshots at the State and its former ally the Shiv Sena, which is in power here, rekindles old wounds that go back to the formation of Maharashtra. This gives an indication of the trouble being brewed from New Delhi.

The writer is the Managing Editor of The Billion Press.