The writing was on the wall. Poverty is on the march. All the slogans about a resurgent India, self-reliance had begun to sound a bit stale, irrelevant, even distasteful. If the middle class shrinks, so will consumption and tax collection. India’s economy will also shrink. One explanation is that that the entire world was in recession. The other is that, yes, the entire world was indeed savaged by the pandemic, but India had been floored and badly mauled. If the world shrank by 6.8%, India shrank by 25%. And India’s poor increased by 75 million.

The economic recovery that the government has been talking about may not be easy to achieve, notwithstanding the country’s amazing entrepreneurial class. This is because, little by little, some well-known, but seldom spoken about, truths have begun surfacing.

Seven steps to cause pain

First, that India’s trade policy is not the one which would help pull out the country from the recession that it is in. Anyone who has read Arvind Panagariya’s explanation why this is so will have no doubt about it.

Second, things could get worse. After all, India spends little on improving its most important asset -- its manpower. Investments on both fronts had declined. Investments on doles and subsidies had gone up, and that even included investments in agriculture. Almost all of India’s neighbours boast of higher scores on the Human Development Index and the Human Capital Index. The only laggard to India’s scores is Pakistan. Does India want that to be its benchmark?

Third, if Covid in its first avatar has done so much of damage, the second wave could hurt India even more severely. If the first wave was marked by the most draconian nation-wide lockdown (many other countries had imposed it for specific areas), the second wave has been marked by recklessness, callousness, and disdain for precaution. This contempt for protocols was not just by common people, but by the government. Watch the way it allowed surging crowds at election rallies. No mass. No social distancing. Data is hard to come by from most of these election-bound states. But pictures speak for themselves. The government turned a blind eye. So did the election commission. Now you will see body-bags and medicare costs soaring in many of these states. The numbers may not come out. But the suffering will increase. Revenue generation will be hit. India will see sand being thrown in its wheels of the economy.

The first indication of a worsening situation are already in public domain. CARE Ratings , through its report of 5 April 2021, reckons that the current Covid resurgence has caused it to project the “potential loss of GVA to the country [from this state alone]. It works out to around Rs 40,000 crore (in real terms). Our earlier estimate of GVA growth for FY22 was 10.24% which now gets reduced to 9.92%.” The numbers are likely to be hinger for the entire country, especially for the election-bound states.

Fourth, India’s temptation for subsidies and doles – especially to (a) the Hindi speaking states, and (b) BJP ruled states, will further weaken India. Doles and subsidies penalise the efficient and give a boost to the inefficient. The farmer agitation is just a symptom of a bigger malaise. 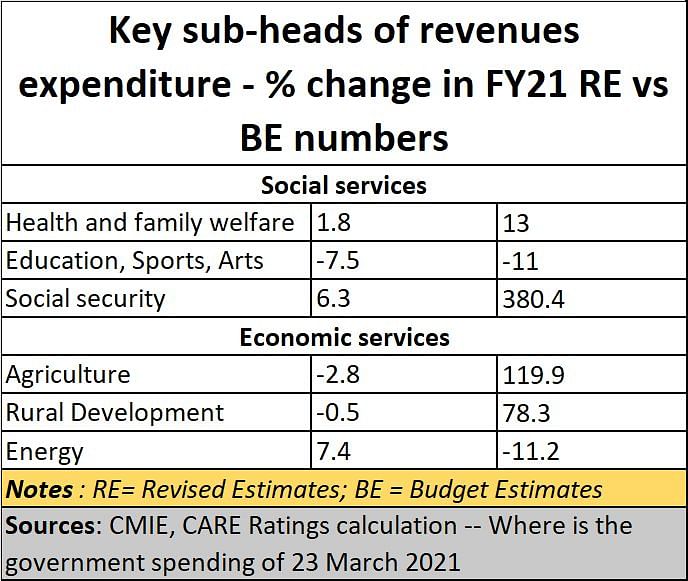 Fifth, the government has been peddling reports of a GDP growth for states in the Hindi belt. The truth is that it is easy to grow GDP – through doles, grants, and subsidies. What matters is the rate of return on such investments. Uttar Pradesh, India’s largest state, with one of its largest populations, could be nurtured to health and prosperity. But, once again, investments in education are not worth talking about. Its health infrastructure is miserable. Its police force is the focus of horror stores that are being played out with increasing frequency. Yet, its GDP continues growing. The recent exposes in the media about the utter lack of lack and order bears testimony to this state of affairs.

Sixth, no country has a strong business class unless it is backed by speedy dispute resolution on the one hand and hefty investments in education and health on the other. This has not happened (see chart).

Lastly, what may be good for winning votes– subsidies, doles, rallies during a pandemic, even religious polarisation – are certainly not good for the economy. The government has excelled in the first. It has not inspired confidence in respect of the second. 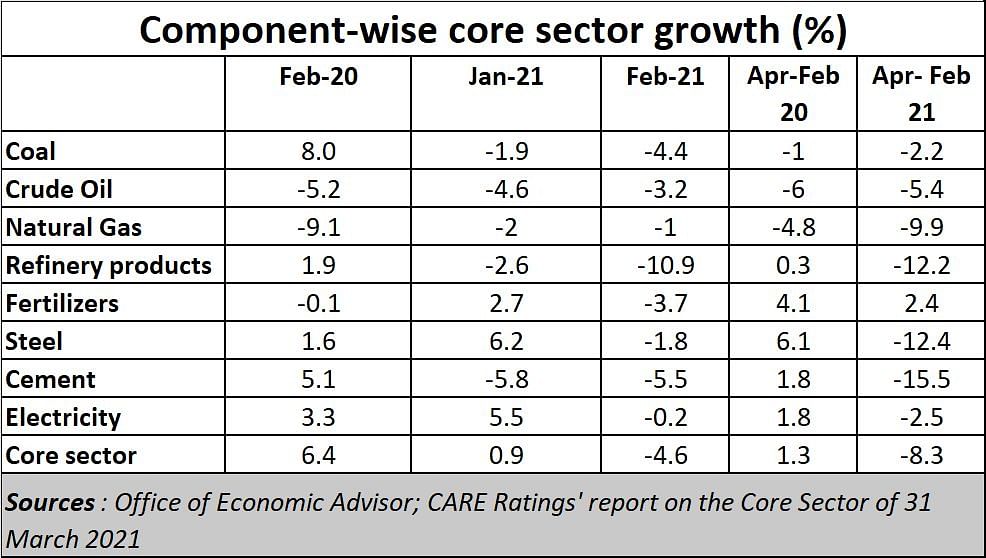 Agenda for the government

Not surprisingly, the latest figures are there for anyone to see.

That the economy is bleeding is evident from the latest numbers. A look at the core sector shows that almost every industry has been marked by negative rates of growth. The sole exception is fertilisers, which is linked to agriculture, which in turn was a recipient of the biggest dollops of cash (see chart)

What is also means is that the wealth generating states of the South and the West have been witnessed their cash being squandered on the Hindi belt. The government may win the votes. But that will be at the cost of good money being poured over bad. The way the norms of the Fifteenth Finance Commission were tweaked, is proof of the intent. No weightages are given to prudent spending of money or to rates of return. Population and poverty become the kay parameters on which the centre doles out cash to these states.

So, what should the government do.

The dairy sector is crucial to the Indian economy. It accounts for 27% of agricultural GDP, or around 5%of national GDP, much more than rice and wheat. This author is convinced that the economic slowdown got exacerbated when the government pushed through the ban on cattle slaughter. So, if the government wants to ease rural stress, and make the economy vibrant, it must first swallow the bitter pill and modify the rules relating to cattle slaughter bans. Bring about genuine reforms in the banking and finance sector. A simple instance confirms this -- when the RBI governor ordered RBI officials to cease being on boards of banks, why did the government reverse this order and allow the conflict-of-interest situation to prevail with the regulator becoming a participant in bank frauds.

Do not dilute the role of the RBI as the regulator. When it comes to Google Pay, why is NPCI trying to be the regulator, even though the RBI has not given Google the required licence?

Why is there no regulator for epayments?

And why have the people who abetted bank frauds – bank managers and senior bureaucrats – not been prosecuted.

Second, the best growth comes when there is competition. The government has shriveled up competition, especially in sectors that are natural monopolies – shipping, aviation, and airports. Never allow one party to become a monopoly. The risk is higher costs of doing business when competitors fade away. It almost happened to the telecom sector. But this sector escaped through the skin of its teeth. Ditto when it comes to cabotage laws. Allow foreign flag vessels to compete with domestic flag vessels. The government has almost sold off the shipping sector to foreign flags.

Finally, the government should get back to its original mission – less government, more governance. Till now, the opposite has been the case. Business grows marvelously when the government keeps its nose away from day-to-day business. It flourishes in territories where there is the rule of law and less of the police raj. And it blossoms when there is competition.

The pandemic has helped highlight the crisis ahead. Little investment is being made. The negative growth of capital goods tells you the story (see chart). A bigger crisis awaits India on the external relations front. But more on that later.

The first wave was bad. The second and subsequent waves could be worse. A course correction is urgently required.