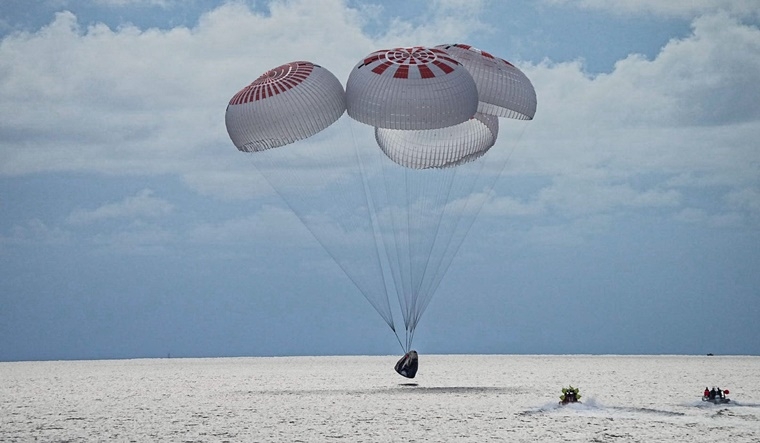 Four SpaceX tourists returned to Earth from a three-day extra-terrestrial excursion on Saturday evening, marking the end of the first-ever flight to Earth's orbit flown entirely by tourists or otherwise non-astronauts.

SpaceX Crew Dragon capsule splashed down in the Atlantic Ocean off coast Florida.

"After orbiting Earth for three days, four astronauts of Inspiration4 flying aboard SpaceX's Dragon spacecraft safely splashed down in the Atlantic Ocean off coast Florida, US today, marking the completion of world's first all-civilian human spaceflight to orbit," said SpaceX.

"That was a heck of a ride for us, and we're just getting started," billionaire captain Jared Isaacman, who financed the trip with a goal of making space a bit more accessible, said shortly after landing.

The all-amateur crew was the first to circle the world without a professional astronaut. The billionaire who paid undisclosed millions for the trip and his three guests wanted to show that ordinary people could blast into orbit by themselves, and SpaceX founder Elon Musk took them on as the company's first rocket-riding tourists.

The passengers included the 38-year-old Isaacman, who personally financed and arranged the trip with Musk; Hayley Arceneaux, 29, a childhood cancer survivor and St Jude Children's Research Hospital physician assistant; Sian Procotor, 51, a geologist and community college teacher with a PhD; and Chris Sembroski, a 42-year-old Lockheed Martin employee and lifelong space fan who claimed his seat through an online raffle.

Though they're not the first tourists to travel to orbit, their mission, called Inspiration4, was notable because it did not involve a stay at the International Space Station under the tutelage of professional astronauts, as previous missions involving space tourists have.

Rather, the four spaceflight novices have spent the past three days free-flying aboard their 13-foot-wide capsule on their own at about a 350-mile altitude -- 100 miles higher than where the ISS is, and higher than any human has flown in decades, reported CNN.

SpaceX hopes that this mission will be the first of many like it, building up a new line of business for the company in which it uses Crew Dragon to fly commercial missions with tourists or private researchers rather than just professional astronauts, reported CNN.

SpaceX already has contracts for five other private missions, as well as at least four additional NASA-contracted missions.

SpaceX's fully automated Dragon capsule reached an unusually high altitude of 363 miles (585 kilometers) after Wednesday night's liftoff. Surpassing the International Space Station by 100 miles (160 kilometers), the passengers savored views of Earth through a big bubble-shaped window added to the top of the capsule.

The four streaked back through the atmosphere early Saturday evening, the first space travellers to end their flight in the Atlantic since Apollo 9 in 1969. SpaceX's two previous crew splashdowns - carrying astronauts for NASA - were in the Gulf of Mexico.

Within a few minutes, a pair of SpaceX boats pulled up alongside the bobbing capsule. When the hatch was opened on the recovery ship, health care worker Hayley Arceneaux was the first one out, flashing a big smile and thumbs up.

(With inputs from ANI and Associated Press)