A protester holds up a placard during a demonstration against the Russian invasion of Ukraine in Sydney on February 25, 2022. | (Photo by Saeed KHAN / AFP)

Russian forces have detained more than 1,700 people that protested against Moscow's action to launch a full-scale evacuation in Ukraine on Thursday - a move that has evoked global condemnation. Some 1,745 people in 54 Russian cities were detained, at least 957 of them in Moscow.

According to a report by news agency AFP, about 1,000 people gathered in the former imperial capital Saint Petersburg on Thursday while several thousands gathered near Pushkin Square in central Moscow. Protesters in the Pushkin square chanted: "No to war!"

Hundreds of posts came pouring in on Thursday condemning Moscow's most aggressive actions since the 1979 Soviet invasion of Afghanistan. Vladimir Putin called the attack a "special military operation" to protect civilians in eastern Ukraine from "genocide" - a false claim the U.S. had predicted would be a pretext for invasion, and which many Russians roundly rejected.

OVD-Info, a rights group that tracks political arrests, reported that 1,745 people in 54 cities had been detained by Thursday evening, at least 957 of them in Moscow.

Roskomnadzor, state communications and media watchdog, demanded that Russian media use "information and data they get only from official Russian sources." Some media reported that employees of certain state-funded companies were instructed not to comment publicly on the events in Ukraine.

Human rights advocates warned of a new wave of repression on dissent.

"There will be new (criminal) cases involving subverters, spies, treason, prosecution for antiwar protests, there will be detentions of journalists and bloggers, those who authored critical posts on social media, bans on investigations of the situation in the army and so on," prominent human rights advocate Pavel Chikov wrote on Facebook.

"It is hard to say how big this new wave will be, given that everything has been suppressed already." Despite the pressure from the authorities, more than 1,000 people gathered in the center of Moscow on Thursday evening, chanting "No to war!" as passing cars honked their horns.

Hundreds also took to the streets in St. Petersburg and dozens in Yekaterinburg.

"This is the most shameful and terrible day in my life. I even was not able to go to work. My country is an aggressor. I hate Putin. What else should be done to make people open their eyes?" Yekaterina Kuznetsova, 40-year-old engineer who joined the demonstration in St. Petersburg, told the AP.

Russia's official line in the meantime remained intransigent. Speaker of the upper house of parliament, Valentina Matviyenko charged that those who spoke out against the attack were only caring about their "momentary problems." State TV painted the attack in line with what Putin said in his televised address announcing it.

Russia 1 TV host Olga Skabeyeva called it an effort "to protect people in Donbas from a Nazi regime" and said it was "without exaggeration, a crucial junction in history."

With inputs from AP 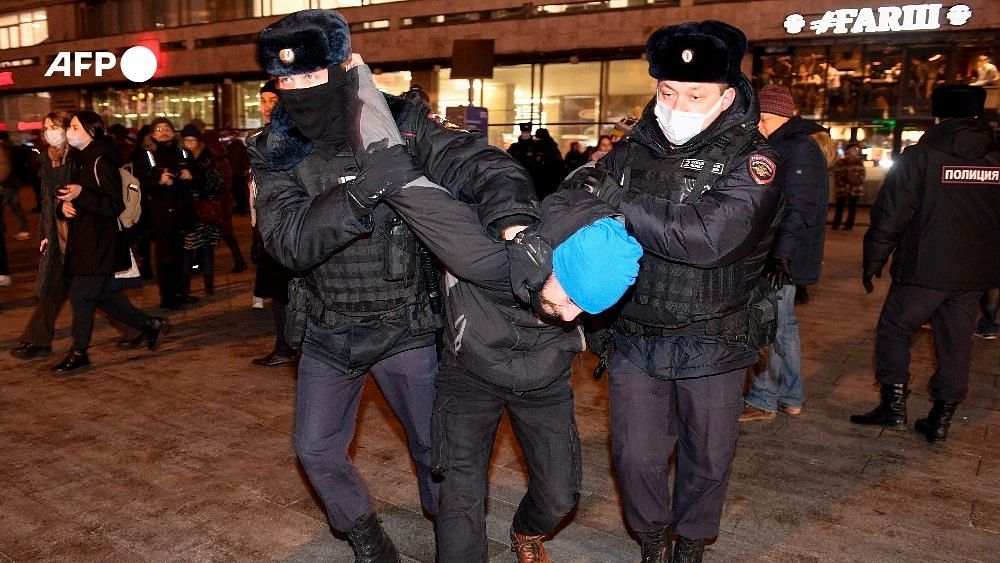