China has complained that the group represents an attempt at forming an “Asian NATO,” though unlike the European alliance there is no mutual-defense pact in effect

Prime Minister Narendra Modi with US president Joe Biden, at the Quad Summit in Tokyo, Japan, on Tuesday | Twitter/@PMOIndia

Tokyo (Japan): US President Joe Biden on Tuesday told Prime Minister Narendra Modi that he is committed to making America's partnership with India among the closest on earth, saying there is so much that the two countries can and will do together.

The two leaders are in Japan for the second Quad leaders' in-person summit.

Biden said he was pleased that the two countries have reached an agreement for the US Development Finance Corporation to continue this important work in India, supporting vaccine production, clean energy initiatives.

"I am glad that we are renewing the Indo-US Vaccine Action Programme," he said.

"There is so much that our countries can and will do together. I am committed to make the US-India partnership among the closest we have on earth," Biden said.

"The US-India is going to continue consulting closely on how to mitigate these negative effects," Biden said.

While the president did not directly call out any countries, his message appeared to be pointed, at least in part, at Indian Prime Minister Narendra Modi, with whom differences persist over how to respond to the Russian invasion.

Unlike other Quad countries and nearly every other U.S. ally, India has not imposed sanctions or even condemned Russia, its biggest supplier of military hardware.

With Modi sitting nearby, Biden made the case that the world has a shared responsibility to do something to assist Ukrainian resistance against Russia’s aggression.

While the other members of the Quad have been united in standing up against Russia’s invasion of Ukraine, especially with sanctions, India increased its purchases of Russian energy supplies after the invasion.

Moreover, the invasion has led to food shortages that are causing price spikes, yet India banned wheat exports following a heat wave that could make this global challenge much tougher to resolve.

Formally the Quadrilateral Security Dialogue, the Quad began as a loose partnership after the devastating 2004 Indian Ocean tsunami, when the four countries joined together to provide humanitarian and disaster assistance to the affected region.

It was formalized by former Japanese Prime Minister Shinzo Abe in 2007, but then fell dormant for nearly a decade, particularly amid Australian concerns that its participation in the group would irritate China.

The group was resurrected in 2017, reflecting changing attitudes in the region toward China’s growing influence. Both the Trump and Biden administrations saw the Quad as key to a pivot toward placing more focus on the Indo-Pacific region, particularly as a counterweight to China’s assertive actions.

The Quad leaders held their first formal summit in 2021 and met again virtually in March.

China has complained that the group represents an attempt at forming an “Asian NATO,” though unlike the European alliance there is no mutual-defense pact in effect.

Quad members say the group is meant to deepen economic, diplomatic and military ties among the four countries. And while they don’t often explicitly say it, those partnerships are meant to be a bulwark against Chinese aggression.

In a March 2021 declaration laying out the “Spirit of the Quad,” the leaders said, “We bring diverse perspectives and are united in a shared vision for the free and open Indo-Pacific. We strive for a region that is free, open, inclusive, healthy, anchored by democratic values, and unconstrained by coercion.”

(with inputs from PTI and AP) 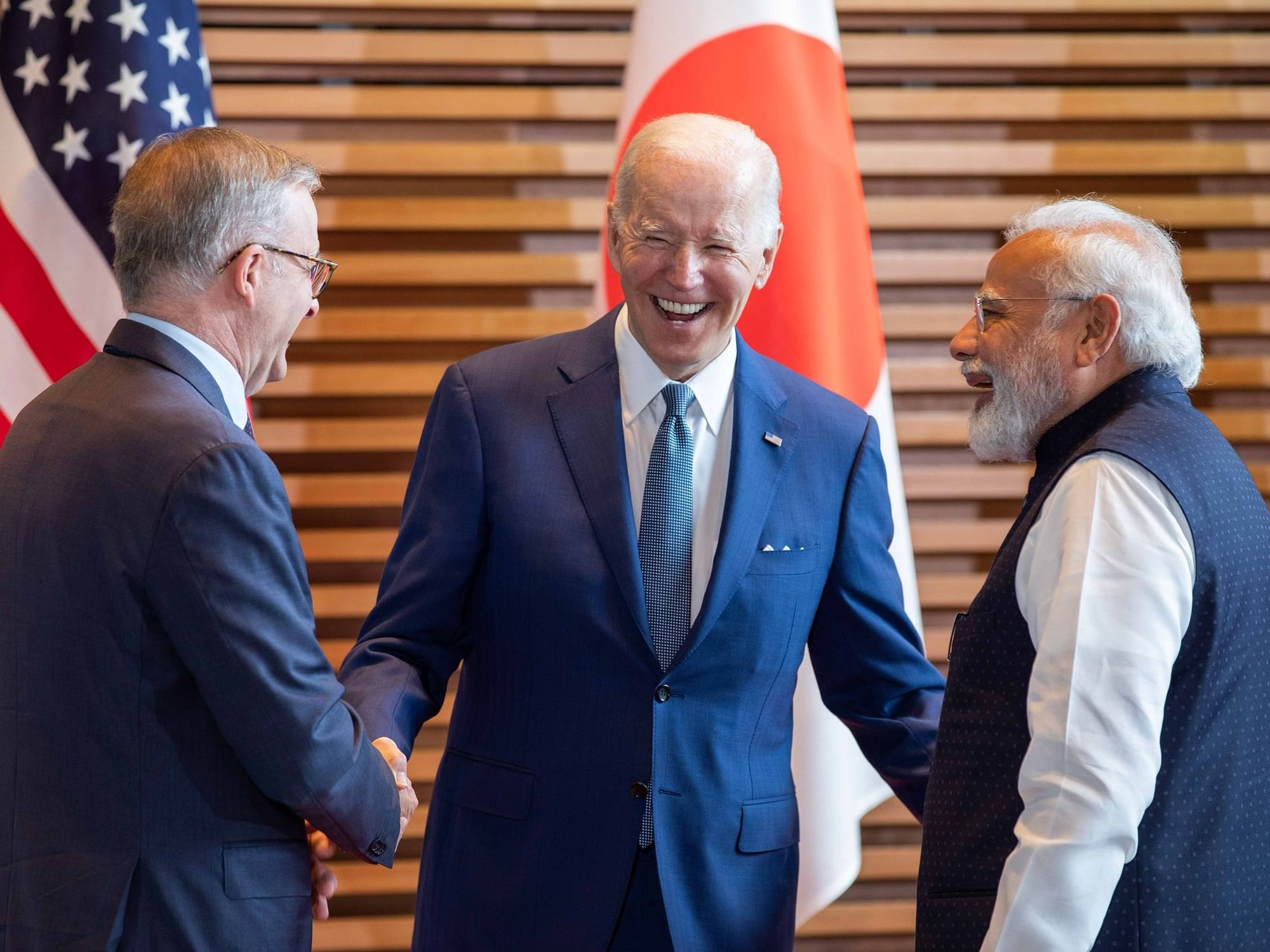