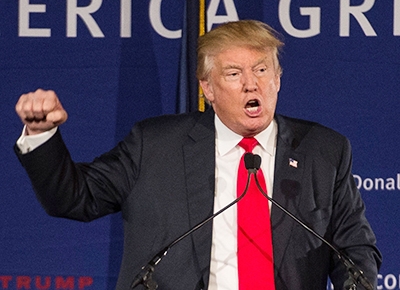 Jersey City (US) : Muslim Americans are pleading with Donald Trump to stop encouraging violence in demanding a “complete” halt to Muslim immigration after a New York shopkeeper was beaten in a possible hate crime, reports AFP.

Republican presidential frontrunner Trump’s inflammatory call is part of what activists have described as an unprecedented anti-Muslim backlash following the Paris attacks and the shooting in California by a couple believed to have turned extremist.

“He’s giving the right to people to hurt us,” said Ahmed Shedeed, who moved to the United States from Egypt in 1980 with a degree in agricultural engineering and today runs a travel agency.

Also director of The Islamic Centre of Jersey City, he spoke to AFP at a mosque, accusing Trump of provoking hate and violence.

“I’m asking him, I’m begging him. It has to stop — all these accusations. Look at the Muslim community as part of the American mosaic and we are part of America. We are not going anywhere.”

Muslim Americans say they are afraid. They talk about women wearing the hijab being spat on, a Muslim taxi driver being shot in the back on Thanksgiving among others.

Just hours before the Republican frontrunner’s call for an end to Muslim immigration, community leaders from New Jersey met prosecutors asking them to take seriously alleged hate crimes against Muslims.

Although data is hard to pin down, the Muslim American community is drawn largely from immigrants, many of whom have prospered since leaving Asia and the Middle East in search of a better life.

A survey by the Pew Research Center in 2011 estimated there were 2.75 million Muslims in the United States, although members of the community put the number anywhere from six to 12 million.