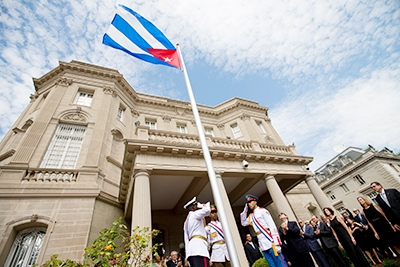 Washington : The Cuban government on Monday reopened its new embassy in Washington with the original Cuban flag that was taken down in 1961, when the two nations cut off ties.

In a move heavy with symbolism, the flag to be raised during the inauguration ceremony is the one that was lowered on January 3, 1961, when the Cuban diplomatic mission in the US closed.

A foreign policy legacy for President Barack Obama, the historic turnaround between two bitter foes has come about at breakneck pace, in just a matter of months since the two sides agreed to bury the hatchet and work together as equals.

The shift came after Washington acknowledged that its policy of trying to affect change in tightly controlled communist Cuba through isolation and trade restrictions had failed, and that engaging Havana directly was a better way to nudge it towards democracy and prosperity. For the first time since 1961, the Cuban flag will fly over Havana’s newly upgraded embassy in Washington, just a stone’s throw from the White House.

The United States had blasted the Cuban government’s seizure of American property and the summary executions of officials from the Fulgencio Batista regime that Castro had overthrown.

Swiss diplomats took over the maintenance of the seaside former U.S. Embassy and the sprawling ambassador’s residence in Havana.

The failed U.S.-backed invasion at the Bay of Pigs, Fidel Castro’s declaration that his revolution was socialist, repeated CIA plots to assassinate Castro, and the Cuban Missile crisis further poisoned affairs for the decades that followed.

But now, the standard with a white star inside a red triangle against white and blue stripes will also take its place among a row of flags from around the world adorning the State Department’s imposing marble entrance in the US capital.

In yet another historic gesture, US Secretary of State John Kerry formally received his Cuban counterpart Bruno Rodriguez for talks Monday, before holding a joint press conference. Earlier, Rodriguez will preside over a ceremony to mark the upgrading of the Cuban interests section to a full embassy.