Earlier in the week, Guterres met Russian President Vladimir Putin in Moscow, where the two were said to have discussed the possible evacuation of the besieged Azovstal steel complex in the city of Mariupol

Earlier in the week, Guterres met Russian President Vladimir Putin in Moscow, where the two were said to have discussed the possible evacuation of the besieged Azovstal steel complex in the city of Mariupol.

The pair were said to have agreed "in principle" to the United Nations and International Red Cross participating in the evacuation.

UN officials reportedly held follow-on discussions with authorities in Moscow and Kyiv "to develop the operational framework for the timely evacuation of civilians."

It's estimated that 2,000 troops and 1,000 civilians are sheltering in bunkers underneath the wrecked plant.

After his meeting with Putin, Guterres traveled to Poland and on to Kyiv by train.

In a tweet yesterday after he landed in Ukraine, Guterres promised to "continue our work to expand humanitarian support and secure the evacuation of civilians from conflict zones".

And he told Portuguese media that Putin had agreed in principle to help evacuate the hundreds of civilians trapped in a steelworks in Mariupol. But he said the operation was complicated and "particularly delicate".

Earlier in Moscow, Guterres and Russian President Vladimir Putin agreed in principle to U.N. and ICRC participation in the evacuation from the plant during a nearly two-hour, one-on-one meeting Tuesday. The sprawling Azovstal complex, which has been almost completely destroyed by Russian attacks, is the last pocket of organized Ukrainian resistance in Mariupol. An estimated 2,000 troops and 1,000 civilians are said to be holed up in bunkers underneath the wrecked structure.

“And ultimately what we want is to make sure that a cease-fire would be respected that would allow us to move people safely,” he said.

Haq said U.N. officials are having follow-on discussions Wednesday with authorities in Moscow and Kyiv “to develop the operational framework for the timely evacuation of civilians.”

He said the exact timing depends on the outcome of discussions between the U.N. humanitarian office and Russia’s Ministry of Defense in Moscow as well as between the U.N. crisis coordinator for Ukraine, Amin Awad, and the authorities in Kyiv, where Guterres will be meeting Ukraine’s President Volodymyr Zelenskyy on Thursday.

Turning to the wider impacts of the war, the Secretary-General spoke of some of the “shock waves” being felt across the globe, such as the “dramatic acceleration” in food and energy costs, which particularly are affecting millions of the world’s most vulnerable people.

“This comes on top of the shock of the continued COVID-19 pandemic and uneven access to resources for recovery, that particularly penalize developing countries around the world. So, the sooner peace is established, the better – for the sake of Ukraine, Russia, and for the world,” he said.

“And it’s very important, even in this moment of difficulty, to keep alive the values of multilateralism,” he added.

The Secretary-General underlined the need for a world that is “multipolar”, that abides by the UN Charter and international law, and which recognizes full equality among States, in hopes that humanity will again unite to address common challenges such as climate change “and in which the only war we should have would be a war of those that put the planet at risk. 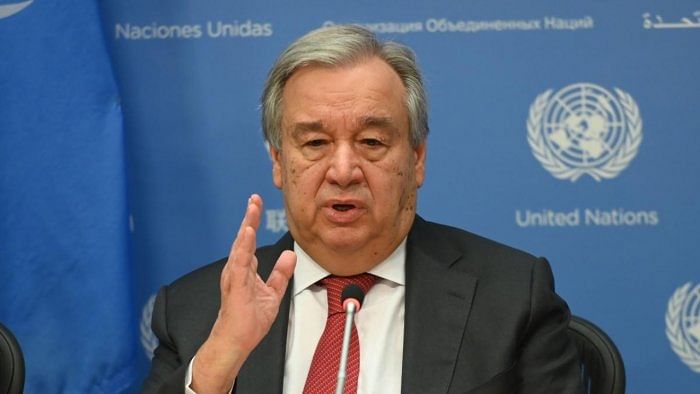