Those who hide sex abuse by priests ‘are guilty’: Pope 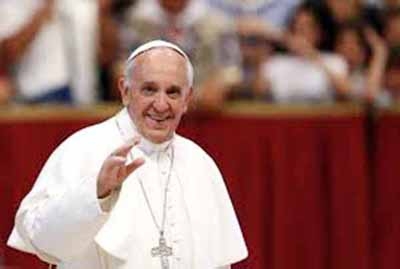 Vatican city : Pope Francis on Monday unambiguously said Church officials who covered up sexual abuse ‘are guilty’ of wrongdoing, as he returned home after a triumphant trip to the United States where he held emotional talks with child abuse survivors.

In one of his strongest comments to date on a scandal that has dogged the Church for decades, Francis said abuse by priests was ‘nearly a sacrilege’ and ‘those who have hidden (such acts) are guilty — including some bishops.’

“Sexual abuse is everywhere,” the pontiff told reporters on his flight back to Rome. “But when a priest carries out abuse, it’s very serious because his calling is to help a child grow… towards the love of God,” he said.

The remarks capped an outspoken press conference aboard the papal plane, during which the famously modest pontiff also downplayed the notion of being a ‘star’ after electrifying adoring crowds in the United States and Cuba with his message of humility and reconciliation. Francis said his job was to be “the servant of the servants of God… It’s a bit different from a star!”

Throughout the nine-day trip, huge crowds lined the streets everywhere the 78-year-old went in Cuba, Washington, New York and Philadelphia.

Francis became the first pope to address the US Congress, calling on elected leaders to take responsibility for crafting a fairer economic system, confronting global warming, restricting the arms trade and abolishing the death penalty.             In New York, he led a multi-faith prayer for world peace at Ground Zero, testament to the September 11, 2001, attacks that killed nearly 3,000 people, a place that he said “speaks so powerfully of the mystery of evil”.

In Philadelphia, the Vatican said more than one million people poured into the streets for his farewell mass — more than double the number who turned out for a service led by John Paul II in 1979. The rare criticism that Francis did elicit was the omission — from his public agenda at least — of a meeting with victims of paedophile priests, but on Sunday he met privately with five adults who were abused as children.

“God weeps,” the pope told a gathering of bishops afterwards, pledging to hold those responsible accountable.

“I remain overwhelmed with shame that men entrusted with the tender care of children violated these little ones and caused grievous harm. I am profoundly sorry.”          —afp

He told reporters today he had spoken “openly” with the abuse survivors, and that he did not judge those who could not find it in their hearts to forgive their perpetrators. Around 6,400 Catholic clergy have been accused of abusing minors in the United States between 1950 and 1980, although campaigners fear the number could be higher.AFP