‘They were us’: The New York Times fills its entire front page with 1,000 COVID-19 death notices

The headline states, “US deaths near 100,000, an incalculable loss”, with a sub-heading: “They were not simply names on a list. They were us.”
FPJ Web Desk 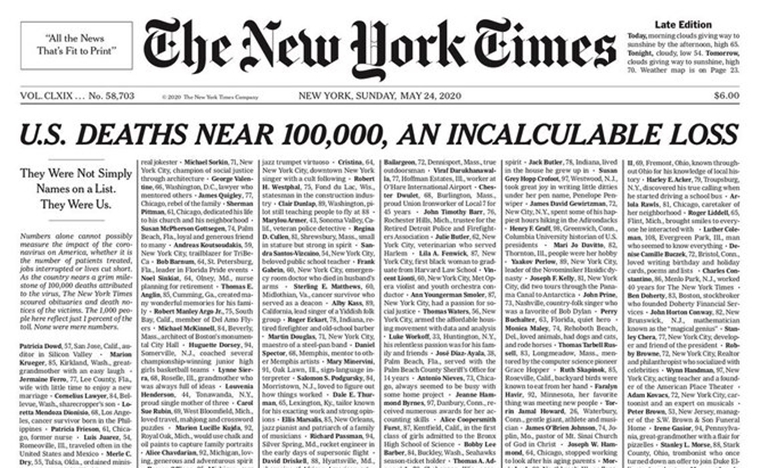 ‘They were us’: The New York Times fills its entire front page with 1,000 COVID-19 death notices |

The New York Times filled the entire front page of its Sunday issue with death notices of COVID-19 victims across the country. It comprises of a simple list with names and personal details taken from obituaries around the US.

The headline states, “US deaths near 100,000, an incalculable loss”, with a sub-heading: “They were not simply names on a list. They were us.”

An article by Times Insider states, Simone Landon, assistant editor of the Graphics desk at NYT, "wanted to represent the number in a way that conveyed both the vastness and the variety of lives lost."

Besides editors across the newsroom, Landon hired a team comprising of researcher Alain Delaquérière, who compiled a list of nearly a thousand names from hundreds of newspapers, and three graduate student journalists, who read them and gleaned phrases that depicted the uniqueness of each life lost.

Tom Bodkin, chief creative officer, said he did not remember any front pages without images during his 40 years at The Times, “though there have been some pages with only graphics,” he said, adding, “This is certainly a first in modern times.” 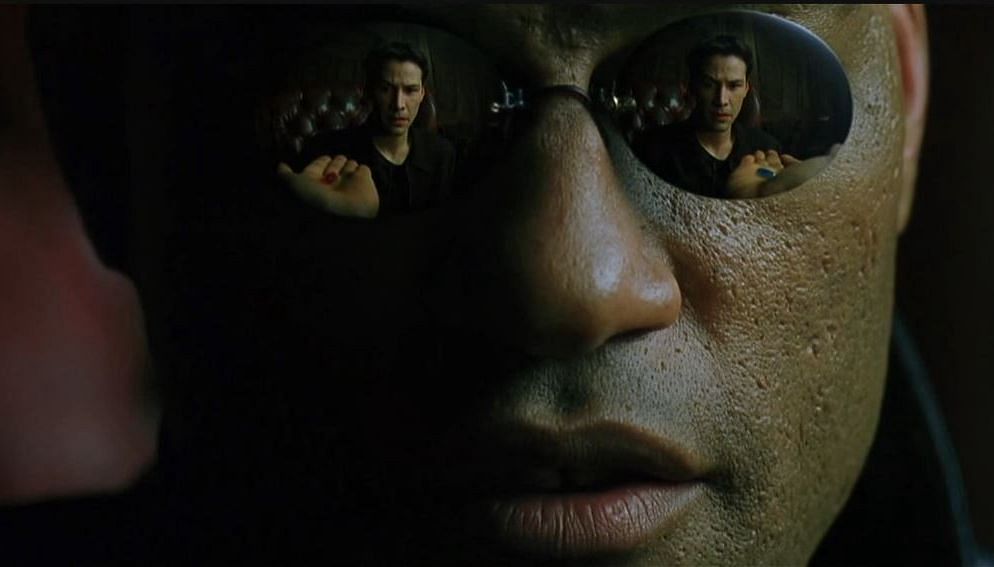 The number of COVID-19 deaths in the US topped over 97,000, according to the Center for Systems Science and Engineering (CSSE) at Johns Hopkins University.

Meanwhile, US President Donald Trump returned to a golf course at one of his properties as jurisdictions across America reopened additional public spaces for people eager to take advantage of the long Memorial Day weekend amid the COVID-19 pandemic.

Originally observed on May 31 and meant to honour the nearly 700,000 Union and Confederate soldiers who lost their lives in the Civil War, Memorial Day has evolved into a commemoration of all those who died while serving in the US Armed Forces.

A 1968 federal law mandating that the observance be shifted to the final Monday in May regardless led eventually to the emergence of Memorial Day as the unofficial start of summer in the US and Americans are accustomed to gathering in backyards and parks and on beaches to celebrate.

In New York state, the epicentre of the pandemic in the US, Governor Andrew Cuomo announced 84 additional fatalities on Saturday, the lowest daily death toll since March 24.

Acknowledging the "tragedy" represented by that number, he said: "The fact that it is down as low as it is, is really overall good news.

New York, which accounts for nearly a quarter of all COVID-19 fatalities in the US, was reporting nearly 800 deaths per day during the worst of the pandemic.

As the lion's share of the cases and deaths have been in New York City and its environs, lightly affected areas in the northern part of the state were the first to see lockdown restrictions eased.

While some of the state's beaches are open for swimming, activities permitted on those within the limits of New York City are limited to walking and sitting.

And beach-goers are reminded to practice social distancing.

Pointing out that around a third of the people carrying the virus display no symptoms, Cuomo urged New Yorkers to be get tested, wear masks in public and not rush to throw parties just because the state decided to allow gatherings of up to 10 people.

In neighbouring New Jersey, Governor Phil Murphy ordered some beaches and seafronts reopened and increased the number of people who can gather outside from 10 to 25.

New Jersey's death toll increased by 96 over the previous 24 hours to 11,081, Murphy tweeted on Saturday.

Delaware likewise opened its coastal areas, but only to residents, as visitors entering the state from elsewhere are required to self-quarantine for 14 days.

Officials in Los Angeles combined the reopening of parks and beaches with a measure intended to keep those spaces from being overwhelmed.

Streets in some neighbourhoods of the sprawling Southern California metropolis were closed to vehicles to provide residents with places to enjoy the outdoors without having to brave large crowds. 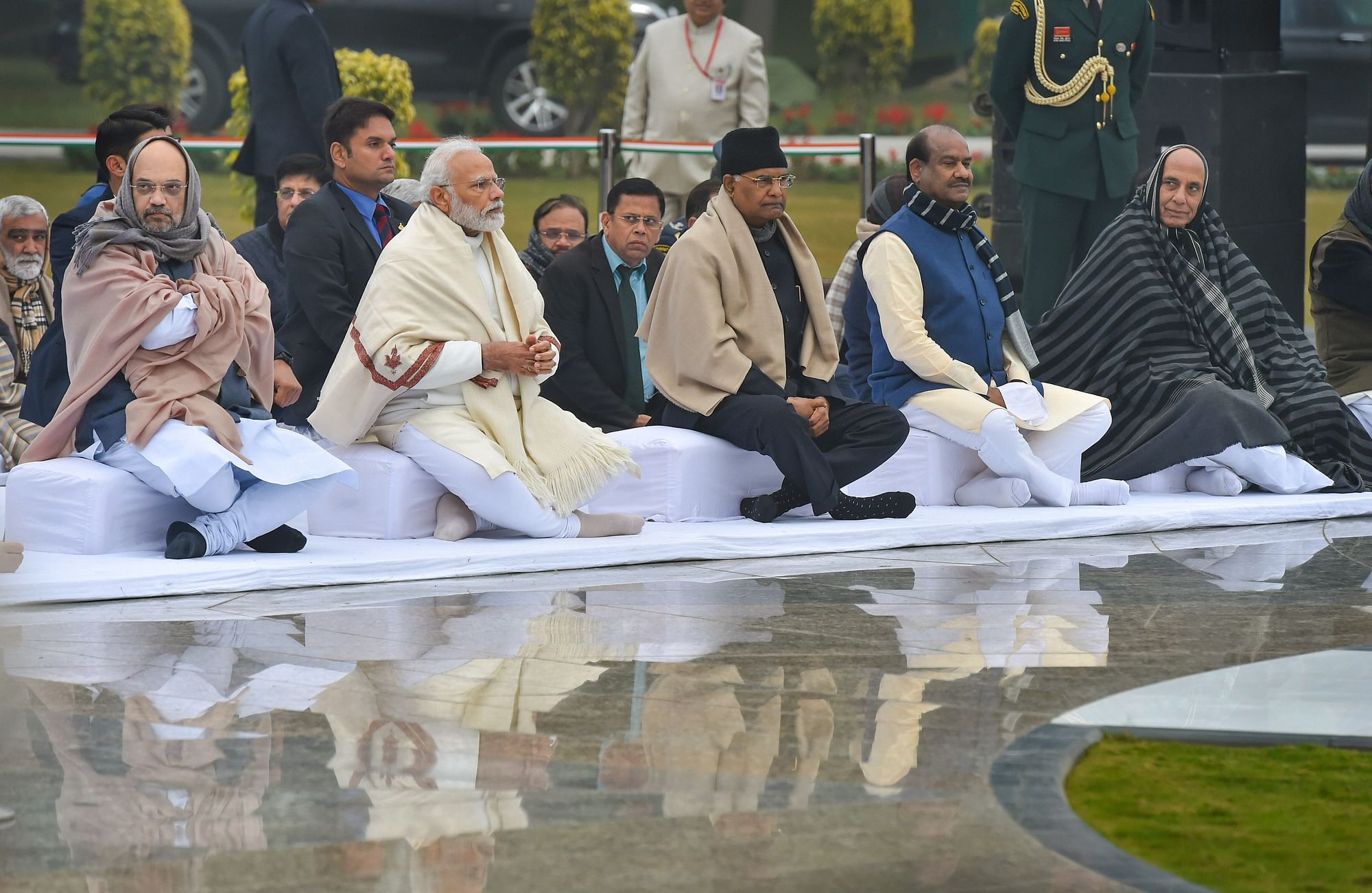