Thailand: 3 injured as pro-democracy protesters rally for reform of monarchy 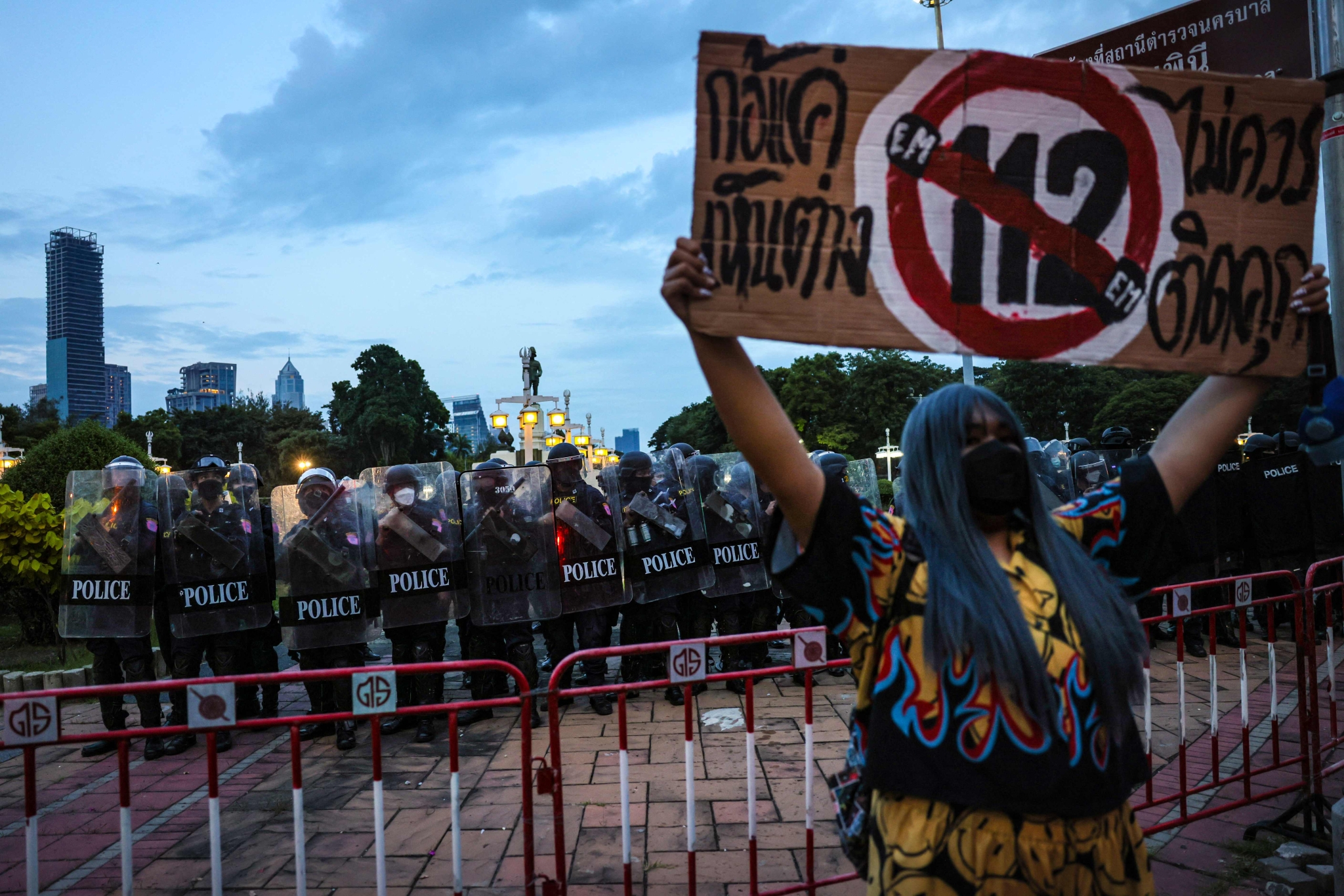 A protester holds a sign referencing article 112, Thailands lese majeste royal defamation law, as riot police keep watch during a demonstration in Bangkok on November 14, 2021, after a Thai court ruled that speeches by protest leaders calling for royal reforms amounted to a bid to overthrow the country's monarchy. | (Photo by Jack TAYLOR / AFP)

Three pro-democracy activists were injured during a rally in Bangkok on Sunday that criticized a ruling by the country's Constitutional Court that said the protesters' demands for reform of the monarchy was tantamount to attempts to overthrow the system of government with the king as head of state.

Hundreds of protesters had planned to march to the capital's Democracy Monument but changed route after police blocked their way, and instead trooped to the German Embassy to submit a petition.

A protest representative read out a statement saying the rally was to protect democracy and to raise voices against absolute monarchy.

King Maha Vajiralongkorn is a frequent visitor to Germany, and is believed to have traveled there recently. Thai authorities and media have not commented on his whereabouts.

Police and the city's Erawan emergency service confirmed three injuries among the protesters, two of whom were later discharged from a hospital while one remained.

The cause of the injuries was not clear, deputy police spokesman Kissana Phathanacharoen said, adding there were explosive sounds heard as the protesters made their way to the embassy. According to local media reports, two of the protesters were shot in front of the Institute of Forensic Medicine at the Police Hospital.

The protesters burnt effigies of the Constitutional Court judges to protest the court's ruling on Wednesday that some previous calls for reform of the monarchy were illegal. The decision implied that the authority of the royal palace supersedes other institutions in a country that's nominally a democracy under a constitutional monarchy.

It appeared to broadly deter all calls for reform of the monarchy by highlighting there are legal liabilities beyond a royal anti-defamation law under which more than 150 activists have been charged in the past two years.

The protests were started last year to demand the resignation of Prime Minister Prayuth Chan-ocha, who came to power in 2014 by staging a coup as army commander; amendment of the constitution to make it more democratic; and reform of the monarchy to make it more accountable.

The demand for reform of the monarchy is the most radical and controversial because the royal institution has rarely faced public scrutiny and is considered by many to be a sacrosanct pillar of Thai identity. Its reputation is fiercely guarded by the country's ruling elite, including the courts and the military.

The statement read outside the German Embassy said the protest movement was "the fight to insist that this country must be ruled with equality." Sirachad Treewisawawet, a representative from the Coalition of Salaya for Democracy, said that the protest against the threat of what he termed "absolute monarchy" will continue until its goals are achieved.

Protesters say Vajiralongkorn, who took the throne after the death in 2016 of his father, has steadily accumulated power and has downplayed the historical significance of the 1932 revolution, which established a constitutional monarchy.