With little hope of a quick end to fighting, Putin pledged Moscow would proceed on its own timetable with its military operation, rebuffing repeated international calls for a ceasefire

Russia vowed to continue its bloody offensive in Ukraine as the war neared its seventh week Wednesday, as President Vladimir Putin insisted the campaign was going as planned despite a major withdrawal and significant losses.

Thwarted in their push toward the capital, Kyiv, Russian troops focused on the eastern region of Donbas, where Ukraine said it was investigating a claim that a poisonous substance had been dropped on its troops. It was not clear what the substance might be, but Western officials warned that any use of chemical weapons by Russia would be a serious escalation of the already devastating war.

Russia invaded on Feb. 24 with the goal, according to Western officials, of taking Kyiv, toppling the government and installing a Moscow-friendly regime. In the six weeks since, the ground advance stalled and Russian forces lost potentially thousands of fighters and were accused of killing civilians and other atrocities.

Putin said peace talks had reached a "dead-end" after Ukraine made "fake" claims of war crimes.

With little hope of a quick end to fighting, Putin pledged Moscow would proceed on its own timetable with its military operation, rebuffing repeated international calls for a ceasefire.

"Our task is to fulfil and achieve all the goals set, minimising losses. And we will act rhythmically, calmly, according to the plan originally proposed by the General Staff," Putin said during a televised press conference with Belarusian President Alexander Lukashenko.

He also dismissed as "fake" reports of the discovery of hundreds of dead civilian bodies in the town of Bucha outside the Ukrainian capital Kyiv after the withdrawal of Moscow's forces.

The mayor of the besieged southern port city of Mariupol says they had to stop counting bodies because of street fighting.

Ukraine and Russia are building up their military forces in the eastern Ukrainian region of Donbas as Moscow switches the focus of its offensive.

There are growing signs Russia could be on the brink of fully capturing Mariupol, the besieged southern port city which has suffered a devastating, six-week assault.

Officially, Ukraine's armed forces say they are sustaining its defence and are in "continuous contact" with their troops on the ground. But they concede it is likely Moscow will try to take full control of the city, while a regional Russian-backed separatist leader claims Mariupol is close to falling.

Ukrainian troops have said they are running out of ammunition, and are believed to have been pushed back into two isolated pockets adjoining the coastline.

It would mark a huge loss, if by now an expected one, for Ukraine's leadership which has described Mariupol as "the heart of this war today".

Moscow is believed to be trying to connect occupied Crimea with Russian-backed separatist territories Donetsk and Lugansk in Donbas, and has laid siege to the strategically located city, once home to more than 400,000 people.

As the fighting dragged toward its seventh week, the Ukrainian army fought desperately to defend Mariupol against the Russian offensive.

"The connection with the units of the defense forces that heroically hold the city is stable and maintained," the Land Forces of Ukraine wrote on Telegram.

However, the Russian Defense Ministry said its army had thwarted an attempt to break the siege with "airstrikes and artillery fire" at a factory in a northern district of the city.

AFP journalists in Mariupol, as part of a Russian military embed, witnessed the charred remains of the city, including the theater where 300 people were feared killed in Russian bombardment last month.

In his nightly address, Zelensky on Monday made another plea to his allies for more weapons to boost the defense of the city.

Zelensky has also said he believes Russia has killed "at least tens of thousands of people" in the city. 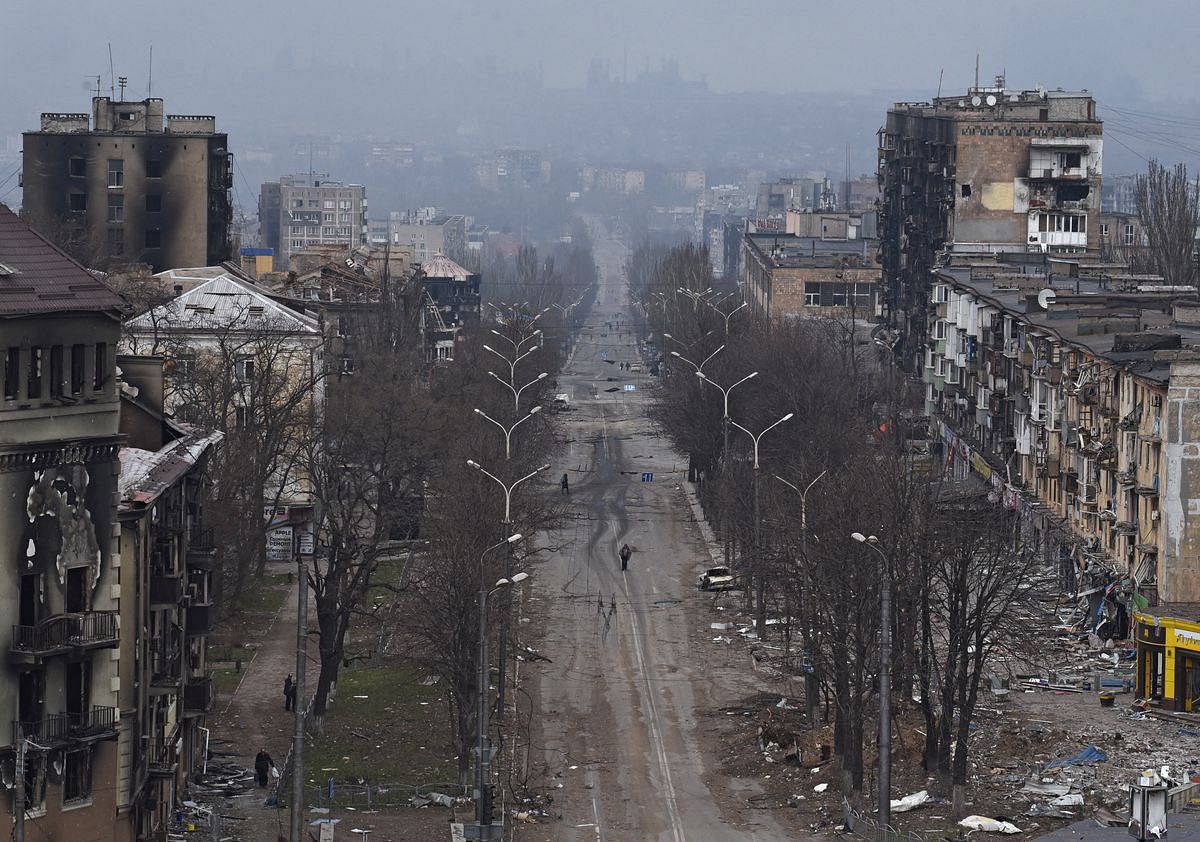 Ukraine braces for fall of Mariupol to Russia as mayor says over 10,000 dead