"I am Giorgia, I am a woman, I am a mother, I am Italian, I am a Christian, and you can't take that away from me," said right-wing nationalist Giorgia Meloni, all but certain to be Italy's first female prime minister

Far-Right party Brothers of Italy's leader Giorgia Meloni shows a placard reading in Italian "Thank you Italy" at her party's electoral headquarters in Rome, on Monday, September 26 | AP
Follow us on

Far-right nationalist politician Giorgia Meloni has claimed victory in Italy’s general elections, and near complete results gave her right-wing coalition a clear majority, setting the stage on Monday for talks to form the country’s first far right-led government since World War II, with Meloni at the helm as Italy’s first female premier.

Monday's results re set to usher in a momentous change for Italy: A party with what has been described as 'neo-fascist roots' won the most votes in Italy’s national election.

Brothers of Italy, Meloni’s party, is also set to scoop by far the biggest share of the votes within the coalition, which includes the far-right League, and Forza Italia, headed by Silvio Berlusconi. 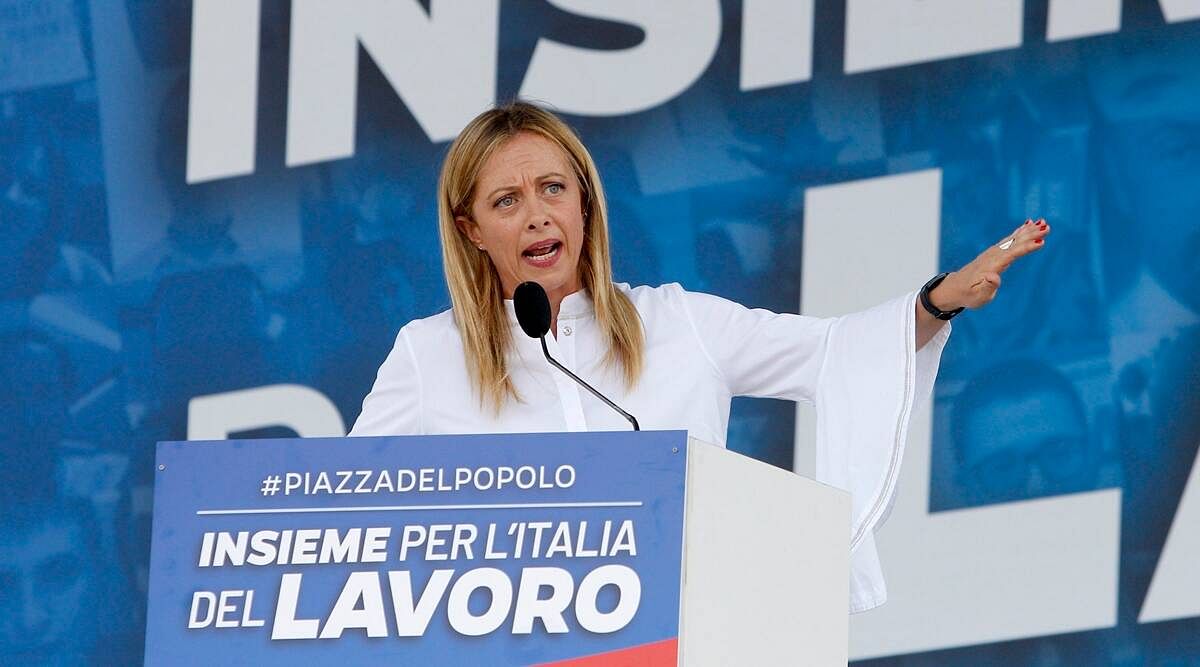 Matteo Salvini, the head of the League, has said he would work with Meloni to form a long-lasting, stable government. The anti-immigration politician is seen as a potential weak spot for Meloni’s chances of forming a government in the weeks ahead.

Her victory portends trouble ahead for the European Union (EU), coming as it does at a crucial time for Europe as it faces Russia’s war in Ukraine and related soaring energy costs that have hit ordinary Italians as well as industry.

Who is Giorgia Meloni?

Born in 1977, Meloni joined the Youth Front, the youth wing of the Italian Social Movement (MSI), a far-right political party with neo-fascist roots, in 1992. In 2012, she co-founded Brothers of Italy (FdI) and became its president in 2014.

A right-wing populist and Italian nationalist, her political positions have been described as far-right, although she rejects this label. Meloni describes herself as a conservative Christian woman and claims to defend "God, homeland, and family".

She has expressed opposed to abortion, euthanasia, and to partnerships, marriages, and parenting by same-sex couples, instead asserting that nuclear families are exclusively headed by male–female pairs.

Being opposed to the reception of non-European migrants and multiculturalism, she has been accused of xenophobia and Islamophobia.

A supporter of NATO, she maintains soft Eurosceptic views regarding the European Union and was in favour of better relations with Russia before the Russian invasion of Ukraine, which she condemned, pledging to keep sending arms to Ukraine.

She has expressed other controversial views, such as praising Italian fascist dictator Benito Mussolini in 1996.

Immigration is the issue the European right-wing cares about most

While a Meloni-led Italian government is largely expected to follow the NATO line regarding Russia's invasion of Ukraine, a bigger challenge and possible point of major friction with the EU is being predicted on the one issue which Meloni was most outspoken on -- illegal immigration.

Meloni has called for a naval blockade to prevent migrant boats from leaving North African shores, and has proposed screening potential asylum-seekers in Africa, not Europe. This is likely to be a non-starter for politicians in Brussels (the capital of the EU).

Meloni has always been a Euroscpetic, regularly engaging in anti-EU rhetoric on the campaign trail. Although she has stopped well short of calling for Italy to leave the euro or the European Union altogether -- keeping in mind the precarious state of the Italian economy -- she is expected to team up with other right-wing leaders in Europe, especially on the issue of immigration.

Meloni has criticized the EU’s recent recommendation to suspend 7.5 billion euros in funding to Hungary over concerns about democratic backsliding, defending autocratic Prime Minister Viktor Orban as the elected leader in a democratic system.

French far-right leader Marine Le Pen praised Meloni for having “resisted the threats of an anti-democratic and arrogant European Union.”

Santiago Abascal, the leader of Spain’s far-right Vox opposition party, tweeted that Meloni “has shown the way for a proud and free Europe of sovereign nations that can cooperate on behalf of everybody’s security and prosperity.”

Meloni is chair of the right-wing European Conservative and Reformist group in the European Parliament, which includes her Brothers of Italy, Poland’s nationalist Law and Justice Party, Spain’s far-right Vox and the right-wing Sweden Democrats, which just won big there on a platform of cracking down on crime and limiting immigration.