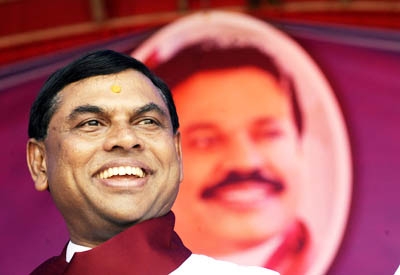 Colombo :  The youngest brother of former Sri Lankan president Mahinda Rajapaksa was arrested on a charge of misappropriating hundreds of thousands of dollars in public funds, a day after he returned from the US.

Basil Rajapaksa, the powerful economic development minister under the former regime of his brother Mahinda, has been arrested, police said.

He becomes the first member of the former first family to be arrested since his brother’s defeat in January election.                 Basil, who returned to Sri Lanka yesterday after spending 3 months in the US, was interrogated throughout the day by the police’s financial crime unit.

He is accused of a 70 million rupee (USD 530,000) fraud in the livelihoods development support fund, which his ministry administered.     He was produced before the magistrate in the Colombo suburb of Kaduwela, police media spokesman’s office said.         He had left for US where he is a green card holder immediately after his brother’s defeat in the January presidential election.

Since Mahinda Rajapaksa’s defeat, several of his family members including himself have faced interrogation by the authorities for alleged misdeeds during his nearly decade-long rule.        Basil was a key advisor to the former president in addition to being a minister.       The other younger brother, Gotabhaya who was the very powerful defence ministry secretary under the previous regime is to appear before the anti-graft commission Thursdaymorning.

Mahinda had dubbed the action against his family as a witch hunt by his successor Maithripala Sirisena’s administration.