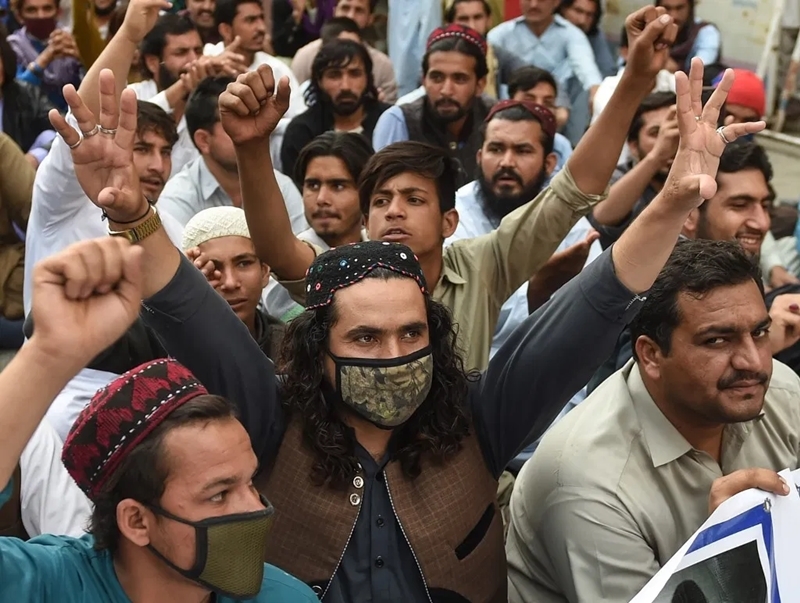 The Pashtun Tahafuz Movement (PTM) held a public gathering in Miran Shah, North Waziristan on Sunday, calling for an end to the brutalities in the country in the form of enforced disappearances, killings and abuses of civilians, and asked the Pakistan military to abide by the Constitution.

PTM members had reached Miran Shah in vehicles from far off distances of Pashtunistan to attend the rally and were carrying white and black flags, reported News Intervention.

The gathering was attended by thousands of Pashtuns, demanding justice for victims of such brutalities.

PTM leader Mohsin Dawar in his speech said that the grand rally was a public referendum in which people are demanding justice for the victims of terrorism.

"Those who say that PTM is over, if they come here today, they will see PTM everywhere," said Pashteen.

News Intervention reported that although Pakistani media continued its unofficial ban on showing the PTM rallies and press conferences in its news reports, photos, videos and news of the rally were widely shared across social media platforms.

The PTM is a civil rights movement that emerged in Pakistan in response to State-enforced terrorism and human rights abuses of Pakistan's army and intelligence agencies in the Pashtun Belt of Pakistan including enforced disappearances, extrajudicial killing, and landmines.

The PTM has been demanding that a commission be set up to investigate state abuses, punish those responsible in accordance with the law, withdraw false cases, compensate the families of victims of terrorism and improve the overall situation in Pashtunistan. It has also demanding setting up a conciliation commission.

According to News Intervention, the Pakistani military has accused the PTM of having the support of Afghanistan and India, and being involved in anti-state activities, though PTM denies these allegations as 'government propaganda'.

PTM leaders have been under the Pakistani state institutions including its army and intelligence agencies. This year in May, PTM leader Ali Wazir's cousin Arif Wazir was shot in front of his home, who later succumbed to his injuries in Islamabad.

Before that, Pashteen was arrested from Peshawar for his speech in Dera Ismail Khan where he stated that the 1973 Constitution violated basic human rights, while a day later Dawar was arrested from outside the Islamabad Press Club along with several others for protesting Pashteen's detention.

Last year, Arman Looni, a core committee member of PTM was allegedly tortured to death by the police.