Philippines Election: 'Bongbong' Marcos Jr. all but assured of victory

Supporters cheer as they arrive at the headquarters of Ferdinand "Bongbong" Marcos, Jr. in Mandaluyong, Philippines on Monday, May 9, 2022 | AP

Ferdinand Marcos Jr, the son of former Philippines dictator Ferdinand Marcos, is on course to win a landslide presidential election victory, with more than 90 percent of eligible ballots counted, according to unofficial data from the poll body.

Marcos Jr. had more than 30.8 million votes in the unofficial results with more than 97% of the votes tabulated as of Tuesday afternoon.

His nearest challenger, Vice President Leni Robredo, a champion of human rights, had 14.7 million votes in Monday’s election, and boxing great Manny Pacquiao appeared to have the third highest total with 3.5 million.

His running mate, Sara Duterte, the daughter of the outgoing leader and mayor of southern Davao city, had a formidable lead in the separate vice presidential race.

The alliance of the scions of two authoritarian leaders combined the voting power of their families’ political strongholds in the north and south but compounded worries of human rights activists.

Marcos' victory would return his family to power 36 years after they were ousted by a popular revolution. Critics allege his campaign was fuelled by misinformation, which he denies.

Turnout on voting day was high and previous elections in the country have largely been ruled to be fair. Isolated incidents of violence - including the shooting of three people near a polling station - were not reflected widely across the country, officials said.

Dozens of anti-Marcos protesters rallied at the Commission on Elections, blaming the agency for the breakdown of vote-counting machines and other issues that prevented people from casting their votes. Elections officials said the impact of the malfunctioning machines was minimal.

A group of activists, who suffered under the dictatorship said it was enraged by Marcos’s apparent victory and would oppose it.

“A possible win based on a campaign built on blatant lies, historical distortions and mass deception is tantamount to cheating your way to victory,” said the group Campaign Against the Return of the Marcoses and Martial Law, or CARMMA. “This is not acceptable.”

Etta Rosales, a former Commission on Human Rights chairwoman, who was twice arrested and tortured under martial law in the 1970s, said Marcos Jr.’s apparent victory drove her to tears but would not stop her from continuing efforts to hold the Marcoses to account.

“I’m just one among the many who were tortured; others were killed, I was raped. We suffered under the Marcos regime in the fight for justice and freedom and this happens,” Rosales said.

In 1986, Marcos senior and first lady Imelda Marcos were forced into exile by the ‘People Power’ revolution. Derided as a dictator who had tortured, killed or disappeared thousands of critics after imposing martial law, and looting billions, Ferdinand Marcos died in Hawaii in 1989.

Marcos Jr. and Sara Duterte avoided volatile issues during their campaign and steadfastly stuck instead to a battle cry of national unity, even though their fathers’ presidencies opened some of the most turbulent divisions in the country’s history.

Despite the unanswered questions over Marcos Sr’s rule, a few years later the family returned to the Philippines to resume their role in politics, using their vast wealth and far-reaching connections to build support.

The vote was also a chance for Marcos to avenge his loss to Robredo in the 2016 vice presidential election, a narrow defeat by just 260,000 votes that he sought unsuccessfully to overturn. Robredo, a 57-year-old lawyer and economist, had campaigned on a promise to clean up the country’s politics, and tackle corruption.

Marcos has presented no real policy platform, but his presidency is expected to mirror outgoing leader Rodrigo Duterte, whose ‘strongman’ style proved popular even as thousands were killed in his signature ‘drug war’.

Marcos’ running mate was Duterte’s daughter, Sara, in an alliance of some of the most powerful families in the Philippines. At the start of his term, Rodrigo Duterte had also allowed Marcos to be buried in Manila’s heroes cemetery.

Critics say this was the result of Marcos Jr consistently painting his father's rule as a "golden age" for the Philippines, whitewashing a period of rampant corruption and widespread poverty.

His father, Ferdinand Marcos, who became president in 1965, imposed martial law in 1972 and presided over a brutal regime which saw thousands of dissenters and critics jailed and killed.

Marcos Sr, who died in 1989, and his wife Imelda stole an estimated $10bn (£8.1bn) from the Philippines' coffers, becoming infamous examples of public graft. 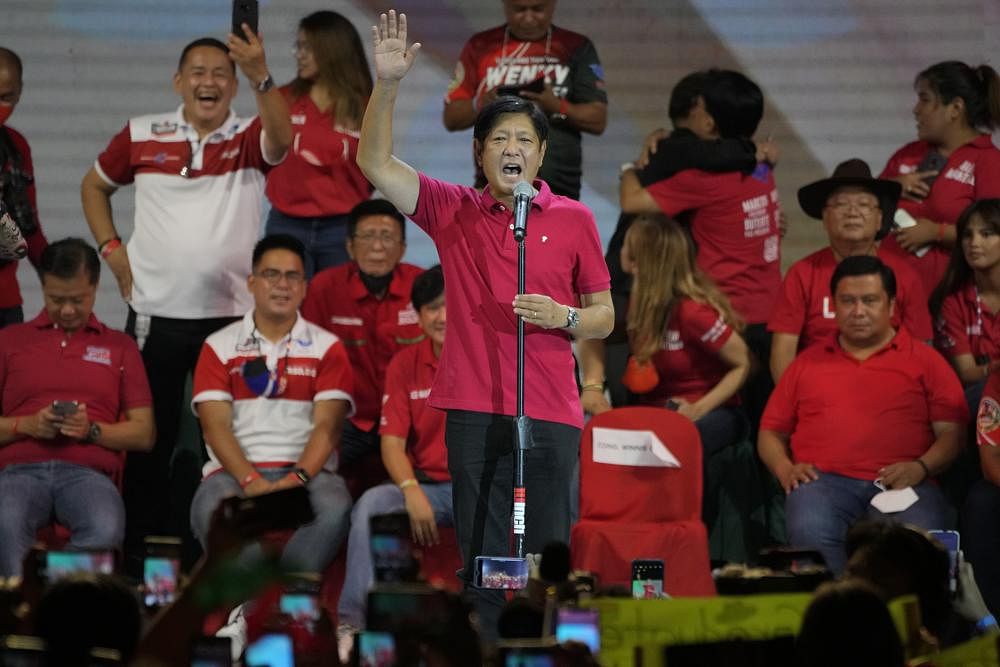 HomeWorldPhilippines Election: 'Bongbong' Marcos Jr. all but assured of victory